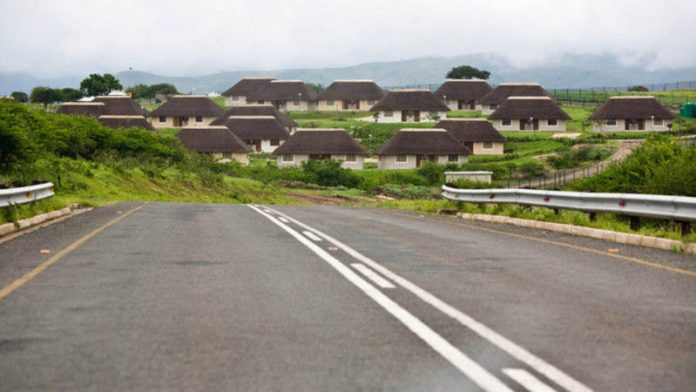 She had negotiated her way out of tight situations before. But on a hot and cloudy afternoon in late November, the Seychelles police pounced. By that night Thandeka Nene – President Jacob Zuma's Nkandla homestead builder, mansion owner, lover of expensive cars and the finer things in life generally – was behind bars and seemingly out of options, accused of being a member "of an international fraud syndicate".

Nene and two others (one thought to be South African and the other from Sierra Leone) now face charges of attempting an enormous, barefaced and surprisingly unsophisticated bank fraud that could, if they are convicted on charges that include forgery, earn them long jail terms.

Police in the Seychelles say the syndicate approached BMI Bank on the islands to open new bank accounts that would be funded by what they said was €500-million in available funds held by HSBC Bank.

This, apparently, came as a surprise to HSBC, which informed its Seychelles counterpart that "the documents were false".

Arrests followed soon after, with a specialised fraud unit of the islands' police force also seizing "a variety of documents as well as laptops and other IT equipment" for forensic investigation.

According to a source with knowledge of the attempted transaction, it was a "reasonably crude attempt" at a common type of fraud, relying on a forged banker's draft. These drafts are routinely sent to the issuing bank for certification and, at an institution such as HSBC, the verification is fast.

What the seized documents revealed and what Nene and her co-accused were intending are not clear. Government authorities in the Seychelles would not comment on the matter and the country's police force said it would not disclose anything but the arrest report, which has few details. They would not even confirm the identities of those arrested.

Appeared in court
"Our policy is that we do not release any identity of any suspects who are being tried unless they are convicted," the police spokesperson, Jean Toussaint, told the Mail & Guardian.

However, sources on the island confirm that Nene was one of those who appeared in court on the charges and that proceedings are still under way.

"Thandeka Nene will appear before a judge tomorrow, Friday December 20, along with two other persons," a judicial source told an AFP reporter in the Seychelles who was following up on information provided by the M&G on Thursday.

Lawyers who have previously represented Nene in South Africa said they no longer have dealings with her, and the firm believed to be representing her currently would not confirm or deny that it was acting for her or speak to the M&G.

Lawyers acting for the defence in hearings in the Seychelles could not be reached.

Neither the chief public prosecutor of the Seychelles nor its attorney general, who is responsible for criminal prosecutions, responded to requests for comment on the matter.

Fraud attempt
The Seychelles mission to South Africa referred questions to the country's foreign affairs ministry, which also did not respond.

BMI Bank, which was targeted in the alleged fraud attempt, said it could not speak about the matter without clearance from its managing director, who was not available.

HSBC in London did not respond to questions.

This is not the first time that Nene's conduct has been questioned, documents relating to the upgrading of Zuma's homestead reveal.

Nene's company, Bonelena Construction, of which she is the sole listed shareholder, held contracts valued up to R78.2-million for government-funded upgrades to the Nkandla complex in recent years. But her relationship with the department of public works, which was responsible for the project, has not always been easy.

Referring to Nene's conduct regarding Nkandla during tense negotiations, a senior department official, Gerard Damsta, asked: "Can it be labelled as fraudulent?" in an internal email seeking legal advice in September 2012.

"What recourse does it [the department] have under these circumstances?"

Damsta's concern was that the department had, after cancelling Bonelena’s contract due to missed deadlines, agreed to pay the company about R7-million.

Final liquidation
At the time, the company had been placed in final liquidation, something Nene did not disclose. In effect, Nene may have had neither the authority to demand the money nor to negotiate with a debtor, but she appears to have done so.

At the time, the department did not press charges; it had already backed down on the ultimately failed attempt to cancel the large contracts after being pointedly warned that legal action could expose the entire project to public scrutiny.

After the supposed cancellation, which Nene refused to accept, she wrote to Public Works Minister Thulas Nxesi. At the time Bonelena had not paid its own suppliers, and they, Nene told the minister, had threatened "to approach the media".

The company, Nene said, would "not be held liable for any resultant reports that may surface as a result".

A little over a month later, Bone­lena and the department reached an agreement.

The company was further helped out by the Industrial Development Corporation (IDC), which came to its rescue with a R10-million loan – on top of the R20-million it had already granted the company.

Despite the unusual circumstances, the IDC has said its decision to grant it the bailout was in no way influenced by politics.

But in the 1980s, the same could only be achieved with cold hard cash; specifically, about R3-million a person.

On November 25 1981, a gun battle broke out in the arrivals hall of Mahé airport, which is still the main entry point into the Seychelles. By the time details started to emerge, such as that one of the two dead was a South African soldier from an elite unit, and that a group of “mercenaries” had tried to overthrow the government, group leader "Mad" Mike Hoare and 42 others had already landed in Durban on a hijacked plane.

Hoare had been resident in South Africa for some time before the attempted coup.

Twenty-five of the "mercenaries" were active or reserve members of the South African Defence Force (SADF). A United Nations inquiry found that the SADF had supplied the group with weapons.

South Africa had been openly opposed to the socialist government in the Seychelles. During the group's trial, the government invoked security legislation to prevent some testimony from being given. Hoare openly and consistently said the operation had had the blessing of the South African government.

Yet it took another 16 years before something closer to the truth emerged.

In its final report, the Truth and Reconciliation Commission (TRC) said it could not conclusively find that the government had planned or ordered the coup attempt, but found that South African involvement was sufficient to hold the likes of the then prime minister, PW Botha, accountable.

During TRC proceedings, retired foreign affairs minister Pik Botha confirmed what had long been suspected: the South African government had paid the Seychelles about R20-million for the return of six coup plotters who had been captured.

Former SA cops work in Seychelles
The police force that arrested Thandeka Nene and two others on charges of fraud has for several years employed one of South Africa’s most storied investigators.

In October 2011, the police in the Seychelles announced it had appointed South African Frank Dutton to create and head up a division tasked with serious crime, which it described as an “elite crime fighting unit”.

Dutton remains in senior management in the force, and is believed to have been involved at least peripherally in the arrest of Nene and her co-accused. However, contacted this week he would not speak to the Mail & Guardian and referred all questions to official channels, citing the confidentiality requirements of his job.

At least one other former South African is also employed to police the Seychelles.

Dutton was partially responsible for the establishment of the now-defunct Scorpions. Over the years he has investigated former defence minister Magnus Malan and exposed third-force involvement in instances such as the Trust Feed massacre. He was a key investigator for the Goldstone Commission, where he was credited for the prosecution of Eugene de Kock, and was also part of the panel that reviewed the case against Jackie Selebi.

Dutton also worked on high-profile investigations for the United Nations.

In 2012, President Jacob Zuma named him a Supreme Counsellor of the Order of the Baobab during the presentation of national orders, "for his exceptional contribution to and achievement in his investigative work as a dedicated and loyal policeman, for exposing the apartheid government's 'third force', for his role in working for peace in KwaZulu-Natal, his international work in investigating and exposing war crimes and crimes against humanity in Bosnia‚ Kosovo and Darfur and assisting in establishing the causes of violence in East Timor and Sudan".