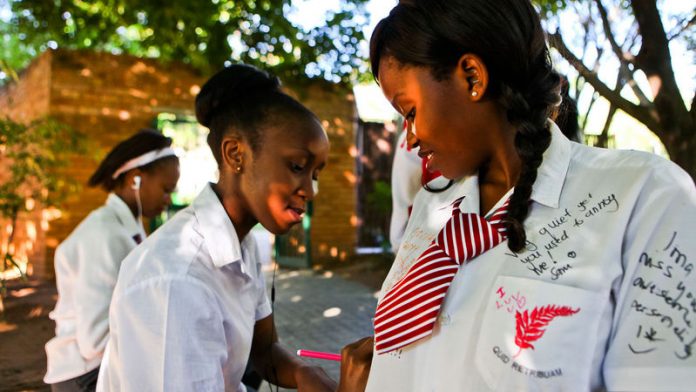 The Independent Examinations Board (IEB) matriculants of 2013 can celebrate a pass rate of 98.56%, an increase from last year's 98.2%.

Of the 9 580 full-time and 586 part-time candidates from 185 schools who passed the IEB national senior certificate (NSC) exam this year, all achieved tertiary study entry pass rates, which allows them to study at a university or university of technology.

A breakdown of the pass rate reveals that 85% of the group achieved entry to degree study – a 3.5% increase from 2010 – while 12% qualified for entry to diploma study; and 1.5% achieved entry for study at the higher certificate level.

IEB chief executive Anne Oberholzer said, "The passing of Nelson Mandela serves to remind us once again of his wisdom. One observation he made was that a good head and a good heart are always a formidable combination. While today we celebrate the 'good heads' of these young adults who have earned their right to embark on the next stage of their lives, it is pertinent that we remind them of Madiba's powerful words so that they remember the importance of a good heart in all that they undertake."

This year saw an increase of 621 pupils writing the IEB exam. This is as a result of an increase in pupils in schools and four new institutions joining the board.

'Delighted'
Roger Cameron, headmaster of St John's College in Johannesburg said he "is delighted with this year's results and extends his congratulations to all pupils in South Africa who have passed their matric exams".  St John's received a 100% pass rate with all pupils attaining university entrance at degree level. They also received a total of 334 subject distinctions, including two students achieving nine distinctions each.

Le Maitre said she found time management became a serious concern for her in matric. "I found that there was only one solution – kick the procrastination bug. I had to adapt a completely new mindset at the start of this year, because I didn't have time to perfect everything I submitted to my teachers. I had to learn to do something correctly the first time and stick to my plans."

She said her teachers played an instrumental role in helping her reach her goals as they "always expected the best of us and just gave and gave of their time, patience and knowledge until I understood". Le Maitre plans to study either a BCom Politcs, Philosophy and Economics or a BSc majoring in Genetics at the University of Cape Town.

St David's achieved a 100% overall pass with a 96% Bachelor degree pass and a total of 192 subject distinctions, including Advanced Programme Mathematics.

Malcolm Williams, the headmaster of St David's Marist Inanda said: "Good matric results are influenced by many factors, including a positive approach to school, to life and to the examinations; full involvement in school activities, as well as 'staying power' during what is a very long final examination period."

Brogden said his good results can be attributed to the fact that he "started planning for the exams early, I worked on time management, and made sure that I got enough rest each day but also that I studied enough and exercised. If there was anything I didn't understand, I would do extra research or I would speak to a teacher from school." Brogden plan to study Actuarial Science at Stellenbosch University.

Savadier, who plans on studying medicine at Wits University with the goal of becoming a plastic surgeon one day, said: "You wont get anywhere you want to without the utmost commitment and self-motivation."

Some of the students who received 10 or more distinctions this year include:

The Combined Abitur-NSC qualification ??
This year's results also included 55 candidates who received a Combined Abitur-NSC qualification, which means pupils can further their studies at either South African or German universities. This qualification is offered by German schools in Cape Town, Johannesburg and Pretoria, with students taking a minimum of nine subjects. Up to four of these subjects are assessed by the IEB, while the remainder are assessed by the German education authorities.