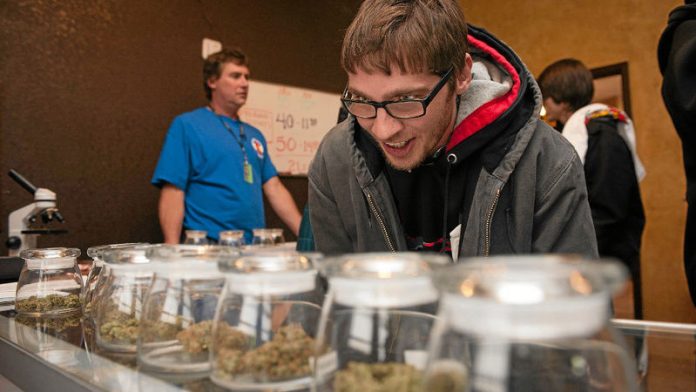 Cannabis users who lit up in Colorado on New Year's Day, when the recreational use of the drug became legal in that state, might have contemplated one cannabis-related paradox as they did so.

The drug they were smoking would have been legally cultivated and sold under state law. And, as far as Colorado is concerned, if they're over 21 they will be able to purchase it lawfully. But by doing so, they will be breaking federal law – namely the Controlled Substances Act of 1970, which makes it illegal for anyone in the United States to possess, manufacture or sell the drug.

In other words, Colorado's recreational cannabis users will be law-abiding criminals.

That such an oxymoron can exist is a credit to the legal gymnastics achieved by the justice department, which is in effect allowing federal drug laws to be routinely flouted without consequence, so long as the law-breaking is done within a state-regulated and licensed system.

Tug of war
The tug of war between federal and state drug laws has been going on for decades, but this latest collision is arguably the most fundamental clash over such policies since New York state opted out of alcohol prohibition in 1923. It was set in motion in November 2012, when voters in Colorado and Washington state approved measures to legalise the drug fully. Stores selling recreational cannabis are expected to open in Washington later this year.

In August 2013, in an attempt to reconcile the obvious difference between federal and state rules, James Cole, the deputy attorney general, released a memorandum in which he advised federal authorities on how they should respond to the state-permitted cannabis trade. In short, Cole's memo told federal officials to look the other way.

Cole did leave the door open to a change in approach, saying federal authorities should still step in if those involved in the regulated cannabis trade failed to support eight "enforcement priorities" set by the department, which include ensuring the drug is not smuggled across state borders, accessed by minors, or used to fund criminal cartels or violence. Cole also said the guidance could be changed in the future.

Cole's memo provided some clarity, but most experts believe it did not offer quite enough. That is perhaps not particularly surprising, however, as the justice department has a history of releasing confusing advice on cannabis laws.

In 2011, the department had to issue a clarification after an earlier memo, on cannabis for licensed medical use, was wrongly presumed by growers to signal that President Barack Obama's administration would adopt a laissez-faire stance toward cultivation of the drug.

Room for maneouvre
For example, Sabet said, "it could be argued" that online advertising by licensed traders in Colorado and Washington entices minors in other states to use the drug. Officials might also conclude that state-sanctioned sale of recreational cannabis conflicts with another of Cole's eight enforcement priorities – preventing drugged driving.

Sabet, a prominent critic of the liberalisation of cannabis laws who is now based at the University of Florida, said he also believed the department could change tactics if at some point it concludes the regulated industry is out of control.

Sam Kamin, a professor at the University of Denver's Sturm College of Law, said that even though prosecutions of those involved in the licensed cannabis trade are unlikely, the justice department's messy policy leaves a host of unresolved problems.

People who smoke lawfully acquired weed could still be sacked by an employer, lose housing benefits or find that they have violated conditions of their parole, all of which depend on the unchanged federal regulations, he said.

And businesses involved in the cannabis trade will, for now, have to deal only in cash, because federal banking regulations bar financial institutions from handling money generated from the sale of banned substances – although there is some talk of the treasury department tinkering with its rules.

Even lawyers, Kamin points out, are confused.

No legal recourse
Earlier this year, Colorado's bar association issued guidance to its members, warning that a strict reading of the state's ethics rules would prohibit attorneys from giving advice to cannabis businesses, as doing so would constitute the knowing assistance of criminal conduct.

All of which means the relationship between federal and state rules is anything but certain, Kamin said: "Something has got to give, because we can't have this multibillion-dollar industry that is built on quicksand."

And the existing guidance isn't just complex and subject to different interpretations – it can be changed.

A new administration could reverse course and deem all producers and vendors of cannabis to be fair game for prosecution, regardless of state law. Drug reform advocates, however, believe such a direct confrontation between federal authorities and states that have legalised cannabis is highly unlikely to happen.

Twenty-one states and the District of Columbia have legalised cannabis use for medical purposes under state law. And much like the growing acceptance of gay marriage, there has been a major generational shift in public support for more liberal cannabis laws. This year, for the first time, a clear majority of Americans said they believe the drug should be legalised.

No objection
Paul Armentano, deputy director of pro-legalisation campaign group National Organisation for the Reform of Marijuana Laws, said he believes a sudden clampdown on a regulated system that is increasingly accepted as the status quo is highly improbable. He points out that, even though two US states are on the verge of selling cannabis as they do alcohol, there has hardly been any objection in Congress, which has even tolerated medical cannabis dispensaries in Washington, DC, which it has the power to close.

"I don't see [a dramatic change in policy] happening because any current or future administration will realise it does not have the public support, or the manpower, to impose federal prohibition," Armentano said.

Mark Kleiman, a professor at the University of California, Los Angeles, who wrote a recent book about the liberalisation of cannabis laws, believes full legalisation across the whole of the US is now likely to happen within the next decade. He predicts that at least one serious presidential candidate could advocate legalisation in the 2016 election, making it a mainstream issue.

But even Kleiman concedes that the permissive guidelines allowing cannabis stores to open to the public in Colorado could be halted or reversed. "Something unforeseen could happen. We could return into a deep recession and Mick Huckabee becomes president," he said, referring to the conservative former governor of Arkansas, an opponent of cannabis legalisation.

Kleiman added that he and others had presumed that the US was headed toward widespread cannabis decriminalisation in 1979, when it was favoured by then-president Jimmy Carter.

"We were wrong," he said. Instead, there was a change of administration and a major clampdown on drug use under Ronald Reagan.

Kleiman and Kamin both argue that the Obama administration should replace the current arrangement, in which the justice department provides informal discretion to states, with a more permanent settlement. Doing so would, at the very least, provide Colorado's cannabis users some peace of mind.

"Since what is being done now is technically illegal, anyone who does it is putting themselves at risk, albeit a remote one, of a prison term when the administration changes," Kleiman said. – © Guardian News & Media 2014

Remains of cannabis farmers executed during apartheid to be repatriated