How I spooked Sanral, and exposed chimney envy at Nkandla 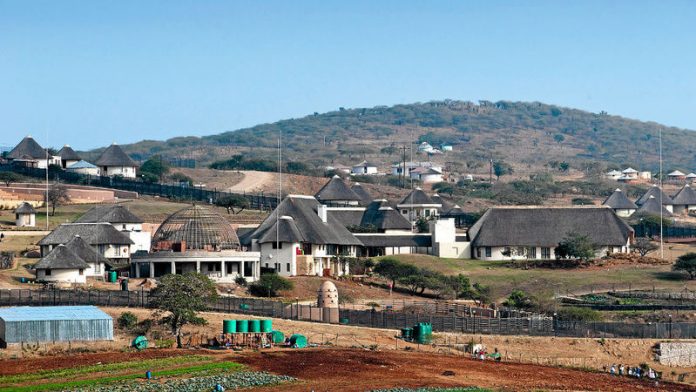 Opening the gates of happiness for the New Year.

In one of those interesting TED talks Nic Marks, the brains behind the pioneering research into the Happy Planet Index, boils down the essential ingredients for happiness to five simple statements.

On an unusually cold and rainy Christmas Day in a Johannesburg emptied of congestion, my family were connecting with daughter's boyfriend and his Dad, in the customary giving of gifts. The merriment of Christmas duly sated, conversation turned to what might satisfy the concomitant wish for a sustainably happy, post-Nelson Mandela New Year. With the Father of the Nation now watching down from the ancestral realm, the opportunity was now open for us to "individuate" as Jung would say, and grow up.

But what unfinished business from 2013 still needed to be buried, so that we could cast aside our adolescent tantrum teenagerhood and mature into the third decade of our constitutional democracy without carrying unnecessary baggage? What rivers did we need to cross through, purged of self-absorption and conceit, to see the promised land? What walls needed to come tumbling down? What gates needed to open up?

Another unexpected 'gift' appeared, one that had to be unwrapped in public.

My daughter's boyfriend's father is an architect who takes notice and keeps learning. Aware that Outa had been busy counting how many cars had e-tags fitted (a paltry 15% as at December 12 2013) he told me that as a student he had noticed that compared to drivers of other makes of car, Datsun/Nissan drivers had a higher proportion of drivers with moustaches. "But another thing I have noticed" he added "The chimney on the main house of President Jacob Zuma's Nkandla home is too short. It is a dangerous fire hazard."

Be active. We were. Off went a letter to the public protector ten days later, concluding:

"Because of the "possible outbreak of fire" the Nkandla inter-ministerial task team responsible for securing the homestead assessed that as a hazard, and found 'in order to eliminate or minimise potential risks and due to erratic water supply, a fire pool – 'the so-called swimming pool' – was decided as the most viable option for fire-fighting.'

"Such a basic problem as the height of a chimney stack would be inexpensive to correct, far more so than constructing a 'fire pool.'  In my view as a social worker who must in terms of my professional code of practice 'challenge social injustice,' the alleged failure by the task team to investigate building standards appears to be a gross instance of 'improper and prejudicial conduct, maladministration and abuse of power in state affairs', by the members of the task team. It suggests that President Zuma may be more at risk from the apparent incompetence of members of his own Cabinet than any external threat."

Whatever our much beloved (except by the ministerial cluster) Advocate Thuli Madonsela makes of it remains to be seen, but our collective yuletide experience dramatically validated Nic Marks' simple formula for happiness.

Thursday, January 2. Siqhamo, the ten-year-old son of my organic intellectual friend and mentor Pasika Nontshiza from Umtata calls me on his dad's phone, in great excitement. "John, I saw you on TV". He wasn't much interested in the issue (Sanral's woeful disconnectness in implementing e-tolling), but ever since we had bonded in 2008, I have watched him and his younger siblings grow up. The bonding had commenced through a typical activist ordeal. Nontshiza is based in Mthatha, and has worked with amaMpondo for over a decade in lobbying and advocacy, initially in challenging the N2 Wild Coast "Troll" Road and then on the Xolobeni mining rights. I had sent out an SOS to his father to rescue me from drowning in an avalanche of media enquiry after government had shocked everyone by awarding mining rights over the ancestral lands of the amaMpondo on the Wild Coast to an Australian mining company. It was school holidays and Pasika was on duty to look after Siqhamo at home in Umtata. No problem. He brought the lad with him, which served again to remind me what the fight was really all about: his future in a society that took seriously their obligation to ensure the environment was "protected for the benefit of present and future generations". That experience had been my initiation and rite of passage into managing the media, and Pasika had taught me how to ensure the "tail didn't wag the dog", (but in such a way that the dog didn't stop wagging its tail, and kept coming back for more.)

Sighamo has developed the habit of whimsically calling me up every six months or so on his father's phone. My Xhosa is non-existent, so Dad has had to translate, thus making it a family affair (which is what it should always be for social workers). After every interval I have noticed how his English has improved. He has kept learning and kept me learning. "It is too such as these…"

A chance offered and taken for me to reconnect with my other mentor, his father, whom I haven't seen for too long, since Gauteng's e-tolling fiasco has taken hold of me, and I have been forced to neglect the amaMpondo.

Pasika and I connect, exchange learnings. He approves of how I have tackled things. Much laughter over unrepeatable interpretations of what the Inter-ministerial task team on the Nkandla security upgrade were really doing.

"Get the Mail & Guardian tomorrow" I suggest "the story should be in there somewhere".

"See Wayne" I tell him "the M&G might not share the general media appetite to hammer e-tolling, so we have got to give them what they need. Front page news nogal!"

Connect, Be Active, Give.

Saturday, January 4. Wayne's smile widens when he picks up the Saturday Star. "E-tolls 'spook' motorists: Systems not coping, says Outa". Journalists Sheree Bega and Tabisiso Takali have excelled themselves in highlighting the litany of complaints that Outa has been fielding from angry motorists. My sound bite is there "Sanral is trying by hook and by crook – and now by spook – to scare and intimidate motorists who have not tagged up to serve the system, even though the system is failing them". I am glad the subs have spotted it, and adapted it for the headline.

"Maybe your writing is at last going to cross-subsidise your social work practice, so I don't have to keep you going as my social responsibility project" she says, ever hopeful.

"GAUTENG PEOPLE! TAKE NOTES FROM AMAPHONDO: E-TOLLS WILL BE DEFEATED

E-tolls offer probably the biggest form and source of social, economic and political instability to be sponsored by government. Its effects are not academic, theoretical or imaginary, they are immediate. They are not like your open view-pay-once-enjoy forever, its cost is permanent. In an era where our economy struggles to grow by double digits, we should be concerned.

Gauteng represents a strategic asset for the economy of the country, any dent or disturbance on its ability to continue playing that role, spells disaster and doom for the entire country. Which is basically why e-tolls should be a concern of the South African population not Gauteng province alone. The reasons are not hard to find: Our economy is intrinsically linked and interwoven such that what happens on the other corner of the country affects the other, examples are galore; Marikana massacre affected the whole country not only miners and their families; industrial action by wine employees in Cape Town was felt all over. Gauteng residents need to save South Africa by embracing opposition to this e-toll scam by embarking on civil disobedience.

AmaMpondo people can teach Gauteng fellows a thing or two. When they were visited by a similar calamity a couple of years ago, they knew exactly what to do and how. Unity of purpose and action, courage and the desire to avoid social instability was their guide. Villagers by their very nature are not easy to mobilise because of the sparsity of their settlements, AmaMpondo overcame that. What is interesting and should be of concern to Gauteng people, is that at the centre of the whole thing was Sanral and Nazir Alli. Sanral proposed to do toll road stretching from Gonubie interchange in East London to Isipingo interchange in Durban. For this to happen, it had cut across the pristine and ecologically protected area of AmaMpondo. To rub salt to injury, proponents of the toll were carrying the discredited titanium mining of the Xolobeni dune sands in the Amadiba area in Bizana, The incestuous relationship between the two projects was the last straw, as there was similarity between the beneficiaries of the mining and toll. Nazir Alli retreated to his usual laager, accusing liberals of inciting the local population. He was proved wrong.

The e-toll struggle pales into comparison compared to the Wild Coast and Xolobeni titanium mining. Both these were pursued by rural folks armed with nothing but their resolve to call their souls their own. The e-toll chaos towards should be enough evidence to all and sundry that the project is poorly conceptualised, not relevant and a rip-off! Gauteng folks can do better than AmaMpondo villagers who had no access to social media, YouTube etc."

It has so far been a very Happy New Year for us.

Will it be so for President Zuma's government?

Will they Connect with reality; Be Active in restoring the rule of law; Take Notice of what the Constitution expects; Keep Learning how to serve the most vulnerable and disadvantaged; and above all Give, instead of taking our money in obscene learned-help-yourself-ishness.