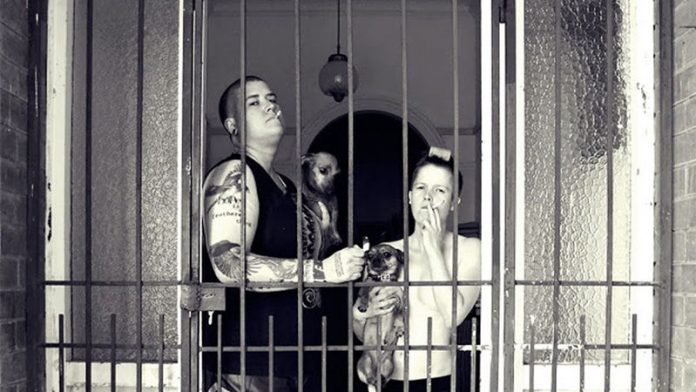 In her book Zoo City, Lauren Beukes's characters explore a grimy, dystopian Johannesburg. Through magical-realism and "animalled" people in the book, we experience the primal electricity that statics beneath the inner-city streets. The latest exhibition at Nirox Projects in Maboneng, entitled ZOO, taps into the same gritty energy of the urban jungle, while at the same time bringing into question the meaning of the word "zoo", both in the literal sense, and, to a lesser degree, the figurative, too.

According to co-curator Ann-Marie Tully, the exhibition's concept was sparked by an over-sized, albeit innocuous, giraffe.

"Ed Young's giraffe [sculpture] was placed at Nirox Projects after the Jo'burg Art Fair. One morning it just arrived from Smac [Stellenbosch Modern and Contemporary Art Gallery] and they needed somewhere to put it. [Co-curator] Neil [Nieuwoudt] got very attached to it, and even called it Sophie."

Tully goes on to explain that Young's giraffe caused havoc with the Maboneng Precinct body corporate, as the sculpture was too big for the space; she added that they were quite bemused – and amused – by the "aggression" directed towards them, thanks to said innocent giraffe.

"Eventually it had to be removed, and we decided that we were surrounded by a zoo; we were surrounded by craziness. My own solo show [Wolf in Sheep's Clothing] was about humans and animals, and it felt like an opportunity to do something relating to Jo'burg and the inner-city; the idea of humans, animals and their liminal spaces."

Maboneng, this area is in itself liminal with its contained capitalist madness while just a few blocks, beyond its imagined boundaries, is the real zoo: the urban jungle of decay and displacement that is the inner-city of Johannesburg.

'Cape Town is just a dump?'
"We have this gentrified space in Maboneng – I'm not knocking it, as it's better than not having it and it does benefit many, but it's kinda weird and creepy that you walk one block down the road and there's really an underbelly of society. There are people and areas that are considered to be unsightly, untouchable, unseeable – and in that way, not human," explains Tully.

"That's where Zoo City came in: people struggling in the peripheries, which also reminded me of The Golden Compass series, where the characters had animal spirits attached to them, much like in Zoo City. We can never become animals but at the same time we are animals. That frisson is very much with us; our animality, the animals we live with and encounter in the city, the neglect – both human and animal."

I ask if ZOO could have been pulled off in Cape Town. "I hate Cape Town – you can quote me on that," says Tully. "At least with Maboneng it's just a couple of streets that have been gentrified. Cape Town is just a dump. The whole city is a gentrified space, a 'Hipsterville'. The whole city is this ridiculous contradiction of the animal [other] – which is on the periphery [right next door, in some cases], and the 'validated' human presence in the city.

"The divides are there in Jo'burg but they are more spliced on top of each other, layered. Perhaps at some point these divides will become less clear and will dissolve more and more."

It's a slight pity that many of the works don't explore these figurative aspects of "zoo", as a number of pieces are about the quite literal "human-as-animal". An artist who achieves this with amazing effect, however, is Lauren "Peachfish" Schlachter, a well-known tattoo artist at Johannesburg tattoo parlour Fallen Heroes. Schlachter's artwork, much like her tattoos, is nothing short of brilliant. Certainly, she has an eye (as her current art studies at the University of South Africa would attest to), but her images of half-people/half-beasts are more than just technically good, they're inspired.

In her piece entitled I've Seen You and I Know You, Schlachter is somehow able to capture something intrinsically freakish, in a sensitive, ethereal manner. In the piece, a young guy is holding a cup of coffee; our eyes are drawn both to his incongruous canine head, which has a flowing Afghan mane, and to his beautiful, tattooed digits.

I've Seen You and I Know You by Lauren "Peachfish" Schlachter. (Supplied)

Exploring African politics
Another artist who I feel captures the human-animal well is Mozambican-born Isaac Zevale. Zevale's work mostly explores African politics, and he uses imagery of "ordinary" animals such as roosters, bulls and pigeons to make social commentary. In his print After the Fight, which was part of a collaboration with Thami Mbenekazi at Artist Proof Studios, a child soldier with a bull's head is clutching an AK47 against a backdrop of a round, flaming Japanese sun.

In another piece, General Cock, President Jacob Zuma is, according to Zevale, a bit of a cock, really. "Zuma is an average person who got lucky, he's nothing special – like a pigeon or rooster," Zevale informs me. "The rooster is also a leader but can be unpredictable and he takes lots of hens," he quips. Although Zevale admits that his work tends to focus on "negativity" he says he hopes to "change how people perceive each other".

I ask Tully why the exhibition features many human-animals, as opposed to more abstract and conceptual pieces. "The concept grew rather fast, and we left it up to artists to propose works," she explains. "Many works are literally 'animal' and it has taken on that aspect. And I'm pleased that it has. I think there are metaphorical layers but I really am afraid of figurative things as I find them reductionist: animals are reduced to metaphors according to human agendas. What I like about this is that everything in this show seems to complicate that boundary."

And certain works in ZOO do just that, they complicate the boundary. An artist who talks more about the figurative, or, as Nieuwoudt puts it, about how "we're all stuck in one big zoo", is Germaine de Larch. Her photographic series Domesticity seems to compliment Tully's concept of the urban animal and how we're all essentially zookeepers, while at the same time we want to escape our self-created concrete enclosures. De Larch's images are zoos within zoos, from the hipster couple lying in their designer bed, to the tacky Die Antwoord-style Jozi urbanites, posing in front of their security gate, fags and small yapping dogs in hand.

'We can't think like people'
Each work comes with its own complexity. This is what makes ZOO interesting: if we allow it, in true post-modern style, we can embrace the idea that there are many layers to our viewing experience. Nieuwoudt's conceptual piece Key to the Mysteries expounds on this. Here we see a book, encased in perspex, that has been opened in the middle. On its double page spread we see an image that looks a lot like a Rorschach inkblot test, but, if we allow ourselves to be with the artwork for a little longer, a whole range of meanings and interpretations open up.

"To say it's a Rorschach image isn't true, as there are only six or seven images they use; this isn't one of them. Whether you see an inkblot or a butterfly, you see what you want to see.  It's your own subconscious reflected back at you. The interesting thing is, the more you look at it, eventually you just see a blot."

Nieuwoudt admits the connection to ZOO is tenuous at best, but it just fits. "It's what you bring to the work," he adds. "The viewer becomes part of the work and the context makes it what it is." For Tully, the book represents reason and words, and how humans have used language to define the world, which is, of course, limiting.

"I just saw an angel in the inkblot.

"I want to complicate the fuck out of it all, " interjects Tully. "This show is very complex; each artwork speaks of a subversion to the status quo […] we have to stay away from trying to find conclusions and clarity. We would be following reason. I think that we can't think like people, we must think more intuitively. There is no answer; 'zoo' is a quagmire."