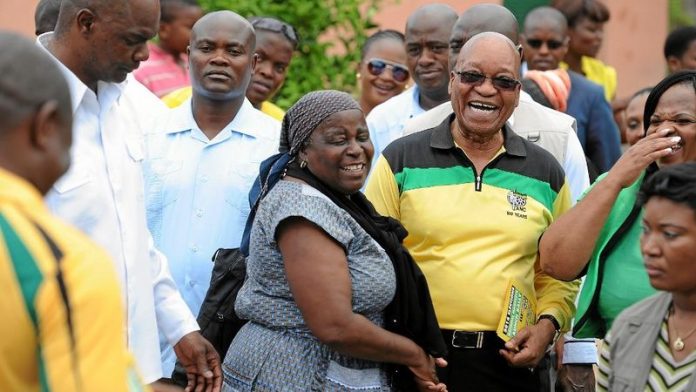 The ANC is leaving nothing to chance this time around in ensuring President Jacob Zuma is not booed when he delivers the party's January 8 statement and launches its election manifesto at the Mbombela Stadium on Saturday.

ANC insiders told the Mail & Guardian this week that a team of state intelligence operatives and police officers were dispatched to Mpumalanga in late December to do groundwork and counter any move by rogue elements within and outside the ANC who intend embarrassing Zuma by booing him in front of the media.

Another team of intelligence operatives will head to Nelspruit on Friday – a day before the ANC's main event – for backup, according to two state security sources who spoke on condition of anonymity.

The extraordinary state security measures for a party event come a month after Zuma received a hostile reception during the memorial service for former president Nelson Mandela at Johannesburg's FNB Stadium. Zuma was booed by the large crowd in front of world leaders.

Meanwhile, regional ANC leaders have been told by the party's top brass not to allow unruly elements anywhere near the stadium.

Allocated seating
Ordinary ANC members have been asked to provide ID numbers and their addresses to local leaders before they enter the buses the party has hired to take them to the stadium. Regions will be allocated specific seating at the stadium so that ANC leaders will be able to identify those that are deemed to be misbehaving during the proceedings.

Several ordinary members told the M&G that they are expected to sit with their regions at the stadium.

Zuma visited ANC members in the Kanyamazane township, a few kilometres outside Nelspruit, on Wednesday. Other party members from an impoverished area near the Matsamo border gate to Swaziland met ANC deputy president Cyril Ramaphosa.

"This never happened before. It never happened that people are forced to register to attend a rally. This is not a conference. They also want ID numbers from us," the branch leader said.

"Comrades are not satisfied. People who are booing him are those who are well informed. They [ANC leaders] are doing everything in their power to control that event. They will also use former MK members. If you misbehave, you will be taken out of the stadium. For every thousand people, there will be 20 people monitoring them."

Mpumalanga is one of Zuma's stronghold provinces and his popularity was in evidence when he visited Kanyamazane on Wednesday.

State security spokesperson Brian Dube said he is unable to comment on how many intelligence officers were sent to Nelspruit.

"All what I know is that the minister [Siyabonga Cwele] is there." Cwele is a member of the ANC's powerful national executive committee (NEC) and a close Zuma ally.

Tight security
Mpumalanga police spokesperson Selvy Mohlala said: "There is no way we can release the numbers publicly. What I can tell you is security is tight for the ANC event."

The ANC's head of organising and campaigns, Gauteng Premier Nomvula Mokonyane, said: "We expect maximum discipline. Every bus bringing people to the stadium will have co-ordinators and marshals. We don't expect anything to go wrong. When the stadium is filled by ANC members alone, nothing will happen. Our members know that their leaders are doing their jobs."

She said the party is expecting more than 85 000 supporters at Saturday's event.

ANC spokesperson Keith Khoza said registering people who attended party events is nothing new. He said the ANC wants to account for every person at its events.

"You have people travelling long distances. In cases of accidents, we should be able to know who was at the stadium. Branches will normally tell us how many people are coming to our events."

Non-members
He downplayed the booing of Zuma at the FNB Stadium, suggesting that those who booed him were not ANC members.

"That the president was booed was not a phenomenon. It was an incident and it was not from ANC members," said Khoza. He said the party had successfully dealt with similar situations during some of its centenary lectures in 2012.

NEC member Lindiwe Zulu echoed Khoza's sentiments, saying booing is not an issue for the party at its own events because anonymity is not really possible. "People know each other, definitely," she said.

"And people are coming here in their formations; they are coming in [their] provinces and regions, and seating arrangements in the ANC is always [done] in that way.

"We're not going to have people running around checking who is booing … we don't have time for that."

She said the topic had not come up at the party's NEC meeting on Monday and Tuesday, as members were not expecting booing and were not concerned about the matter.

Religion and politics
She likened the party to a church. "Can you go to church and someone starts insulting the priest, and then no one knows who it is?"

Zulu said the party has not progressed very far in disciplining those who booed at Mandela's memorial. "Disciplinary processes of the ANC don't take two minutes; it's a process," she said.

"We are not in the process of checking the booing right now. Right now we are ensuring that our January 8 event goes very well, and our election campaigning goes very well."

ANC Free State chairperson Ace Magashule said he does not expect anyone from his province to boo Zuma. "This time, we are bringing the youth [to the ANC manifesto launch]. We decided to mobilise those who are not normally at ANC events."