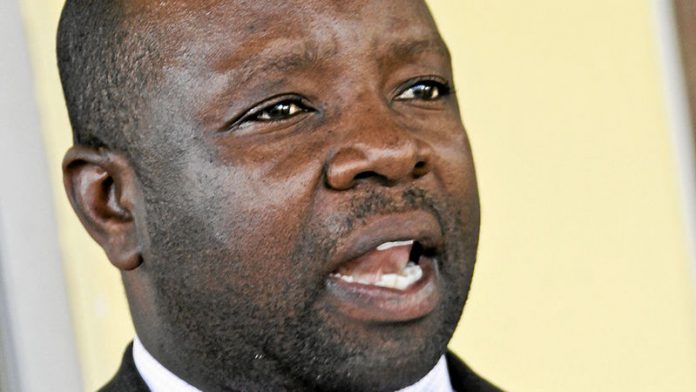 Munyaradzi Kereke, a former adviser to Gideon Gono during his tenure as the governor of the Reserve Bank of Zimbabwe (RBZ), has upped the ante in his fight with his former boss by supplying the Constitutional Court with documentary evidence that he says proves that Gono siphoned off millions from the bank during his 10-year tenure.

Kereke turned to the legal system to force the Zimbabwe Anti-Corruption Commission (ZACC) to investigate Gono after it ignored his requests for them to do so. Gono denies all of Kereke's allegations.

In an answering affidavit to opposing affidavits by the ZACC chairman and Gono, Kereke has also claimed that former Finance Minister Tendai Biti colluded with Gono in siphoning off the funds.

The ZACC and Gono are cited as the first and second respondents. In his affidavit lodged on Wednesday, Kereke told the Constitutional Court he is also in the process of approaching the court to force Biti to recuse himself from the case as he is both a suspect and a witness in some of the allegations and should be jointly charged with the former governor.

Biti is serving as Gono's legal counsel in the case. Both Gono and Biti were not available for comment.

Kereke said some of the funds were siphoned off under the guise of funding a "sensitive national institution", which he does not mention, but he said he is willing to provide such evidence in camera.

Some of the money, Kereke said, was siphoned off under the guise of funding the Zimbabwe National Army and Zimbabwe Republic Police.

Missing IMF funds
Kereke says an audit by BDO Kudenga in 2009 picked up that $49 234 770 in IMF special drawing rights (SDR) was withdrawn from the RBZ account without trace or documentation.

Kereke attached an audit report to the RBZ oversight committee dated December 31 2009 in which the audit firm concluded: "There was a transaction amounting to SDR ZW$31 520 350 ($49 234 770) during the year for which supporting documentation could not be availed."

The auditors said there was a risk of misappropriation of funds and urged the central bank "to investigate the transaction and obtain the supporting documentation."

Kereke alleges that Gono was the ultimate signatory to the account and that Biti had withdrawn the funds without the knowledge of the RBZ.

The former adviser alleges that on September 29 2010 Biti moved $19 450 000 from the Commercial Bank of Zimbabwe account in which he had deposited the money to Interfin Bank "under the guise that this money was going to support industry".

"This was never the case and government lost this money with the full complicity of the second respondent," said Kereke.

Artificial debts
Kereke alleges that Gono created artificial debts for the RBZ and these debts have since been taken over by the government.

The minister of finance, Patrick Chinamasa, announced during the 2014 national budget presentation last month that the government was taking over the RBZ's $1 385-billion debt.

Kereke, however, says the actual debt is $1 131- billion, meaning there was a shortfall of more than $200-million.

He said he would also raise the matter in Parliament so that the state is not prejudiced. Kereke is also an MP for Bikita West constituency.

He said it would be improper for Biti to represent Gono as he had been part of the decision for the government to take over the RBZ's debts. He attached correspondence between Biti and Gono as evidence.

Foreign currency
Kereke also alleges that Gono siphoned off public funds by buying foreign currency on the black market during the hyper-inflationary period and then allegedly used the money for his personal use. In his affidavit he says he would tell auditors the money was used to fund a "sensitive national institution".

He said KPMG and BDO Kudenga auditors had picked up that more than $37 535 300 was used in this way and attached the audit reports.

"From discussions with management, it is not clear what these funds were being used for, but were just provided on request. Also we were not availed with evidence at the time that these were properly authorised by the bank's structures."

KPMG noted that there was a risk that officials could request funds that were not authorised and the bank could disburse funds that ended up being abused. The auditors also said it was difficult to classify the amounts disbursed given that the money was given out as cash.

A BDO Kudenga audit said the audit firm could not verify with receipts the funds paid through a Mr Chiremba's office "due to issues of sensitivity".

"We need an assurance from the governor in writing that everything was above board and indeed the indicated beneficiaries actually got the cash."

Kereke said neither the sensitive national institutions nor other government departments received the cash and said this can be proved by asking Gono to produce receipts in camera and issuing a subpoena to the alleged sensitive institution to either confirm or deny ever receiving those funds.

Travel claims
Kereke also alleges that Gono made fraudulent travel claims and attached a KPMG audit report to buttress his point. A partner-audited sections management report dated December 31 2009 says that executive travel and accommodation were paid based on statements from Vantage Travel without supporting documents from service providers.

"All flight and accommodation invoices were being sent by the service providers directly to Vantage Travel, which in turn would bill the bank for the same … Total expenditure processed through this account during the year under review amounted to $741 649. 02," wrote KPMG.

KPMG said, without supporting documents, management was not able to confirm the accuracy or completeness of the statement received from the travel agent.

The memo reads: "The details are kept in the governor's office. This request is extremely urgent."

He also attached another memo dated July 22 2009 in which Naicker wrote to another bank employee instructing him to transfer R1 865 869 to the same travel agent.

More payments
Kereke also attached an audit report by BDO Kudenga to support allegations that a company called Trade Access, which he said dealt directly with Gono, was overpaid $1 779 000 for generators he says they never produced.

An audit report for the year ended December 31 2008 reveals the bank made payments under the agricultural mechanisation programme but the quantities received did not match the quantities ordered.

The audit revealed that there was a potential for fraud and financial loss to the bank. The audit said there was a risk the bank could pay for services it never received.

BDO Kudenga recommended that the bank should reconcile with the supplier regarding the order and the generators received. The RBZ's management pledged to investigate but Kereke said no such investigation was made.

Shares fraud
Kereke alleges that Gono may have disposed of more than 50-million shares purchased from National Discount House under a special projects account that he personally handled.

He attached a BDO Kudenda report for the year ended December 2008 in which the auditors said they were only given share certificates for 3 051 309 shares instead of the bank's shareholding of 53 580 984 shares.

Kereke also provides documentary evidence that RBZ could have been defrauded of about $3.8-million when the central bank supplied basic commodities to vulnerable people during food shortages in Zimbabwe.

He also said there was prejudice to the state regarding a $20-million fertiliser contract the bank entered into with Intshona Agricultural Products Pvt Limited.

Kereke says he provided proof of the alleged fraud to the ZACC, which investigated the matter but stopped after being allegedly bribed by Gono. He alleges Gono bought houses for some of the ZACC officials.

"While I am not a medical expert and while I am not contending that [the] applicant is insane, I genuinely believe that he has legitimate psychological and psychotic issues that need professional examination and help."

He said Kereke was trying to jeopardise his pending nomination as a Zanu-PF senator to Parliament.

The RBZ was regularly audited by firms KPMG, Deloitte and Touche and BDO Kudenga and that the bank was clean, he said.