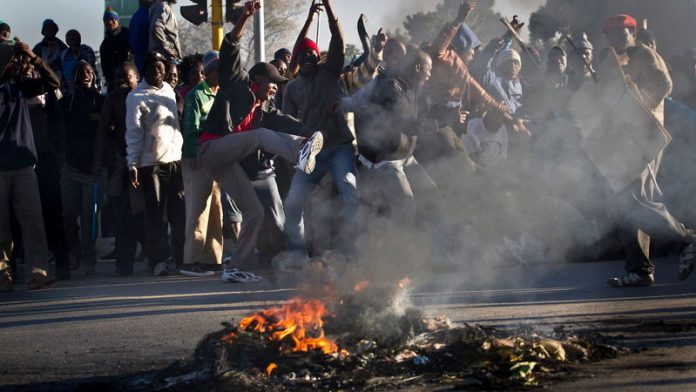 Police confirmed that two people were killed and another two injured in a stand-off between protesters and police near Brits in the North West, eNCA reported on Monday.

Two protesters were shot dead and two were wounded during a service delivery protest, said Colonel Sabata Mokgobone. Police were called to monitor protesters after they barricaded a road with burning tyres.

Leon Basson, a Democratic Alliance (DA) councillor in the Madibeng municipality told the Mail & Guardian that the protest involved members from Brits and Mothotlung communities.

He said the communities were connected by the same broken water pipe and had been without water for a week. They were en route to the municipal offices when "something went wrong … and the police opened fire".

The municipality's purification pump and standby pump were both broken, he said.

Video
Basson arrived at the scene after the shooting. While he did not witness the protest, he said he was informed that a video of the incident was available, and more information would be made available at a community meeting scheduled for Monday night.

He was told that two people were killed, allegedly by the police, while three others were injured. By Monday afternoon the protesters had dispersed while the situation in Mothotlung remained "tense", said Basson.

Meanwhile, the DA in the North West has called for an independent investigation into the the two protestors' deaths in Brits.

"Violence can never be condoned at a protest action, by either side," North West DA leader Chris Hattingh said in a statement on Monday.

Hattingh said the party was shocked and outraged at the incident.

The Madibeng municipality was not immediately available for comment. – Additional reporting by Sapa