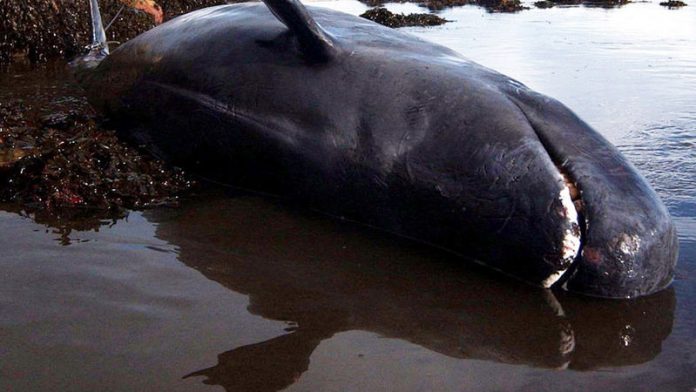 At least 13 pilot whales were beached on Tuesday on a remote New Zealand coastline and conservation officials were desperately battling to prevent another 50 from reaching the shore.

It is the second mass stranding in a week at the remote Farewell Spit, at the top of the South Island, which has become notorious as a whale graveyard.

Department of conservation officials said they were alerted to the latest stranding late on Tuesday morning and were using a boat to try to shepherd the whales still afloat out to sea.

Volunteers were protecting the stranded whales from the sun until an attempt to refloat them at the next high tide.

"We plan to attempt to refloat the stranded whales in the incoming tide tonight," conservation ranger Gregg Knapp said.

"We are hoping we can get them afloat and further out to sea before dark when it would become unsafe for people to work in the sea trying to refloat the whales."

Last week, a pod of 39 died after a mass stranding in the same Farewell Spit area, about 150km from the tourist city of Nelson.

Shell’s seismic survey on the Wild Coast will be destructive, scientist says