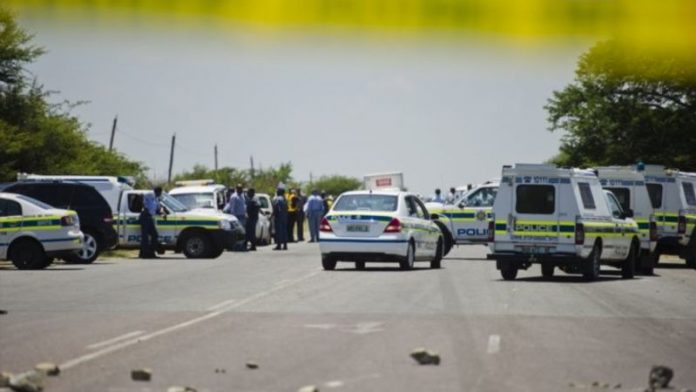 Eyewitnesses say the police were unprovoked and threw tear gas and shot bullets into a peaceful march at Mothotlung, near Brits in the North West on Monday. Marchers were shot at while protesting because their water supply had been cut off for a week.

Marchers also say they were given no warnings before the police intervened, in contravention of current crowd control policies.

Police in the North West told the Mail & Guardian that they had to "disperse" the crowd after stones were thrown at the police, and hawkers' shops were "looted". But the police could not clarify whether Monday's operation was a dispersal operation or a crowd management scenario that went wrong.

They also could not say what time they arrived at the scene on Monday, how many officers were deployed, nor what their orders were (to disperse or manage the crowd).

"That is operational information which we cannot give out. But as police we cannot be violent … The crowd started looting hawkers' stalls and throwing stones and we had to disperse them," said North West police spokesperson Lieutenant Colonel Sabata Mokgwabone.

No provocation
Not so, according to one of the marchers, Chris Sebea. He said the police used force arbitrarily, without any provocation, and without any warning.

"The police started circling us, and then they shot at us. Those who died or who were injured were innocent."

Indeed, a march on Sunday to Mothotlung councillor Solly Davids's house was peaceful, even on the police's version of events. No one charged and no one was attacked, although some community members were not satisfied with Davids's explanation and wanted to march again on Monday morning, according to Mokgwabone.

It is unclear why Monday's protest had a different result.

Police records show that while the North West has a high rate of so-called "service delivery protests", between 2009 and the end of 2012 only five were held in Mothotlung, and the police regarded all of these as "peaceful".

However, Police Minister Nathi Mthethwa painted the community as violent in his address on Tuesday.

"We want to reiterate the point that the public have constitutional rights to protest and raise whatever issues they may be discontent with. These very rights to not imply that people must be violent, destroy property, attack police and intimidate others. However, as we have seen on many occasions, many protests have been accompanied by serious provocation, intimidation, public violence and even elements of criminality," he said.

Mthethwa was quick to defend the police and reiterate that questions cannot be asked about their behaviour until investigations by the Independent Police Investigative Directorate (IPID) are complete.

Standing order 262 (PDF) is the police's policy on crowd policing and crowd dispersal.

It says the police must make an assessment of the potential threat involved during a gathering, immediately after being notified that the gathering will take place. They must take into account the party's history of violence in this regard.

It further says: "The use of force must be avoided at all costs and members deployed for the operation must display the highest degree of tolerance … During any operation ongoing negotiations must take place between officers and conveners or other leadership elements."

Priority
If negotiations break down, the order says police must put defensive measures in place as a priority, and warn participants that action will be taken against them if the police cannot defend themselves.

The next step the police must take involves bringing forward the section of the "platoon" that will be involved in "offensive" measures, in a further effort to avoid violence.

"Give a second warning before the commencement of the offensive measures, giving innocent bystanders the opportunity to leave the area," says the standing order.

Eyewitnesses say none of these steps were taken, and that no warning was given before the police shot at them.

The police protocol does make provisions for the use of force to be used if it is unavoidable. If force is used under these circumstances, it must meet several requirements: the purpose of this type of offensive action must be to "de-escalate the conflict with minimum force to accompany the goal".

Crucially, the degree of force must be proportional to the seriousness of the situation and the threat posed; it must be reasonable; and it must be stopped once the objective is achieved.

Force may only be used in "extreme" circumstances, if less effective measures have failed. Protesters at Mothotlung say they were fired at with rubber bullets and tear gas, simultaneously, although they were not sure whether live ammunition was used.

No evidence
As yet, there is no evidence to suggest that the police satisfied any of these requirements before opening fire.

According to experts, standing order 262 is outdated, and the police pulled out of a 2011 attempt to develop a clearer policy on the use of force.

The Council for the Advancement of the South African Constitution (Casac) called on Mthethwa to urgently clarify the police's position on the use of ammunition.

He said calls for the same from the Human Rights Commission have previously been ignored.

Casac chairperson Sipho Pityana said: "Indeed it appears that a policy of maximum force is prevalent within the [South African Police Service], a view that Casac outlined in its written submission to the Farlam commission of inquiry. The obfuscation of SAPS officials testifying before the Farlam commission strengthens the perception that the police are not prepared to accept responsibility for their actions and to be formally held accountable."

"We are concerned that more than a year after the Human Rights Commission published its report on the killing of Andries Tatane, its recommendations appear to have been ignored by the SAPS … The minister of police must urgently clarify the position of the SAPS with regard to the circumstances when live ammunition may be used, and what measures have been put in place to ensure that the constitutional rights of the public are respected by the SAPS."

Tatane died on April 13 2011, after police used rubber bullets and batons to subdue him during a service delivery protest in Ficksburg. The cops involved were acquitted of his murder.

​No action had been taken against any police officers by Tuesday afternoon.