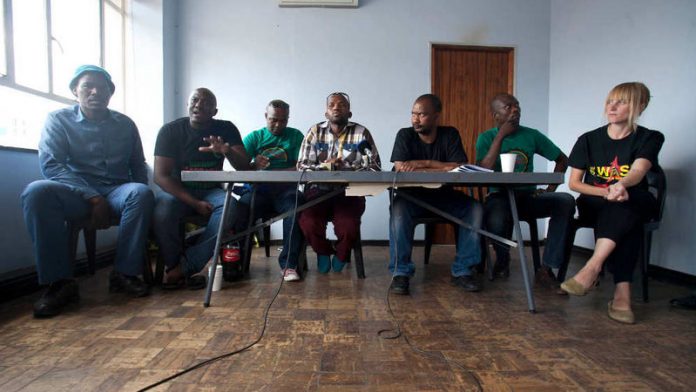 Five Association of Mineworkers and Construction Union (Amcu) shop stewards have challenged union president Joseph Mathunjwa to a live debate following statements made against them and others at an Amcu mass rally at Olympic Stadium in Rustenburg on Sunday.

According to the men, three from Amplats and two from Impala, Mathunjwa accused them of deserting Amcu, forming a rival union, and corruption related to the retrenchment of Amplats workers.

According one of the workers, Gaddafi Mdoda, Mathunjwa "attacked us deliberately in front of the masses by pouring allegations on us that can't be proven".

Mdoda said this led to the assault of Godfrey Lindani – who had to be rescued by the police – and threats against their lives. The men claimed they laid charges of defamation against Mathunjwa as a result of the statements.

Amcu national treasurer Jimmy Gama said they were not aware of the charges.

According to Mdoda, among the accusations levelled against them were:

"We saw this coming because every person who questions Mathunjwa is targeted," said Mdoda, who was wearing an Amcu T-shirt commemorating the Marikana massacre.

"This started when we questioned the firing of the regional organiser Albert Phanyana late last year. He is also being accused of forming the new union with us."

Negotiating table
Mdoda said if Mathunjwa did not come to the negotiating table to resolve these issues, the Amcu T-shirts would be coming off. Gama said he considered the likes of Tyobeka, Mdoda, Lindani and others to be former members as they were recruiting for a new workers union – something which they had apparently admitted to.

"If they're recruiting for a new union and their subscriptions are still being deducted to Amcu, that means it is only for the time being," said Gama.

Tyobeka said the shopstewards had written three letters to Mathunjwa requesting a meeting but had received no response. Maqanda, from Impala, said people were resigning from Amcu in numbers and seeking the solace of worker committees who helped to recruit for Amcu during last year's strike wave.

The workers have also questioned the union's readiness to embark on a strike in three of the biggest platinum producers in Rustenburg, namely Impala, Lonmin and Amplats, as well as the planned action in the gold sector. Maqanda said: "We want the strike but we don't want the strike when there is no actual consensus, while we are accusing each other of eating money because people can actually die in the process."

Mametlew Sebei, of the Workers and Socialist Party (Wasp), said that at this point the biggest threat to Amcu was itself, as the union had failed to build structures and establish offices outside of the mine because the mine-based offices become inaccessible during strikes.

He said that while this was the biggest and most pivotal protected strike since Marikana, Wasp had raised concerns about the union's level of preparation and organisation.

"Strategy, when it comes to a strike, needs to be canvassed among the rank and file, the levels of disunity in this case are problematic."

Meanwhile the union’s registration is once again in jeopardy, this time over the union’s finances and the legitimacy of its leadership
Read more
National

Strikes over poor working conditions have intensified over the past four years, the recently-released Industrial Action Report for 2018 reveals.
Read more
National

Not a year into buying Lonmin, Sibanye is accused of mistreating the mineworkers who were injured eight years ago during the Marikana massacre. But the platinum giant says it is a miscommunication. Athandiwe Saba and Paul Botes visit Marikana to find out the truth
Read more
Business