Mandela: A nationalist and a Marxist 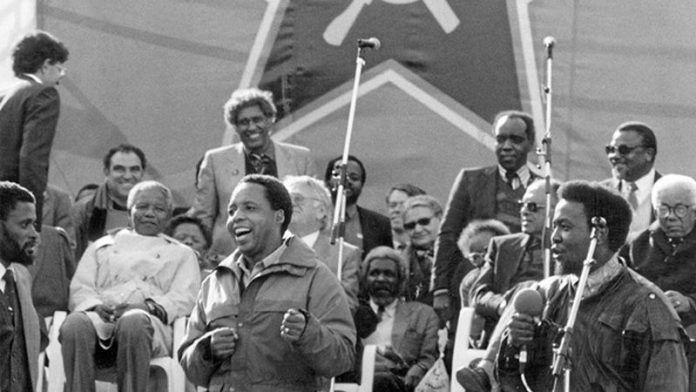 Hugh Macmillan is not free from what he terms a "Cold War" mentality, when he describes the rigorous research of Stephen Ellis on the relations between the ANC and the SACP as "McCarthyite".

That term of abuse – first used in 1950 – really does take us back to the time of Stalin, and it does no credit to Macmillan.

"Was Mandela a communist? He denied on several occasions that he was ever a member of the SACP. Why should we not believe him?" Macmillan asks. "Mandela may have been co-opted on to the central committee in his capacity as commander of Umkhonto weSizwe …

"People are frequently co-opted on to the committee of one organisation to represent another, but co-option does not necessarily imply membership." This is an extraordinary comment, coming from a senior historian of South African political history.

Whether from study of the writings of Vladimir Tismaneanu, Leszek Kolakowski or any other major scholar of communism, it should be an embarrassment for Macmillan to write of a communist party – and especially an illegal party such as the SACP, preparing insurrection against such a powerful state as apartheid South Africa – as though it was just any old … "organisation".

Please, Hugh Macmillan, the "organisation" that initiated the formation of Umkhonto weSizwe (MK) after the Sharpeville massacre in 1960 was not just a church committee, or a local football club, or even the board of a significant business corporation.

It is simply weird to consider the SACP outside of the strict criteria by which Lenin formed the Bolshevik Party, and of the subsequent Soviet model that was never once questioned by the Communist Party from its original formation in 1921 through to the downfall of the Soviet Union.

To assert that the SACP was some kind of liberal deviant from the standard organisational form of a communist party is absurd.

I write this on the basis of having stood trial and served in prison as a member of the SACP alongside three members of the central committee (Bram Fischer, Eli Weinberg and Ivan Schermbrucker), and carried out underground journalism under the direction of two others (Ruth First and Hilda Bernstein).

This was confirmed by the SACP itself on the day after Madiba died, when it stated: "At his arrest in August 1962, Nelson Mandela was not only a member of the then underground South African Communist Party, but was also a member of our party's central committee."

Research of top-rate international quality on this subject by Stephen Ellis and Professor Irina Filatova published between 2011 and 2013 had also confirmed Bernstein's remark.

To claim that co-option to the most senior level of the SACP did not entail membership is a nonsense.

The harsh conditions of underground struggle in the early 1960s meant that co-option to the central committee was a regular occurrence. Successive waves of arrests and escapes out of the country meant that vacant posts had to be filled quickly and securely.

The really interesting question now is the nature of Mandela's commitment to Marxism as a philosophical and political theory.

The degree to which Mandela can be considered to have been a Marxist, as distinct from a very senior member of the SACP, requires study in terms of political theory and philosophical categories, in the usual way.

My own interpretation is that Mandela was a nationalist first and foremost who decided on pragmatic and strategic grounds in 1960 that it was correct for him to join the SACP at central committee level. In his memoir smuggled out of Robben Island, he writes: "I was to embrace dialectical and historical materialism as my philosophy", but he then describes the dialectical method as "a mighty weapon which puts me in a strong position to realise all my aspirations as a nationalist and as a member of the human race".

No Marxist of Marx's or Lenin's or even Stalin's kind ever wrote "all my aspirations as a nationalist", not even Mao. This is a far more fruitful way to explore the complexities of Madiba's political thinking than the dead end of whether he had ever been a member of the Communist Party. That question is now settled.

Paul Trewhela is a former member of the South African Communist Party, a political prisoner and the author of Inside Quatro: Uncovering the Exile History of the ANC and Swapo, published by Jacana.

Myths and dangers of the ‘great man theory’ for the ANC