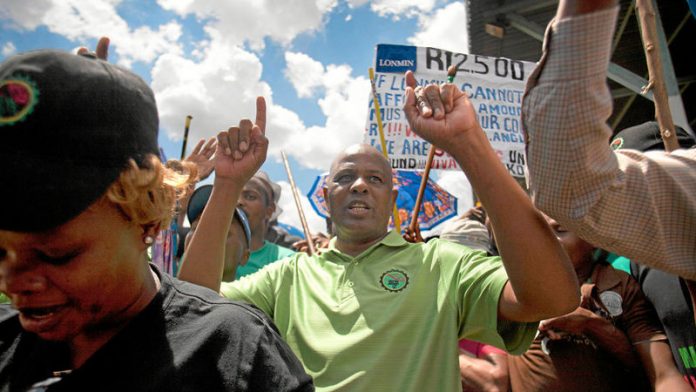 He had agreed to meet me in the parking lot of a shopping centre in Rustenburg.

"I stayed in hospital for six months before going back to the workers’ committee," he said.

"The police were trying to stop the strike, but we were told by [Asso­ciation of Mineworkers and Construction Union president Joseph] Mathunjwa to carry on with it. That strike wasn’t only about money but about bringing Amcu into the mine. We made sure people joined the union by force."

His take on events seems to fit in with the accusations flying back and forth between Mathunjwa and a group of disgruntled Amcu shop stewards from the Implats and Amplats mines. They also come against the backdrop of the union’s strike at three of the platinum belt’s biggest producers: Amplats, Implats and Lonmin.

Betrayal
The strike, which began on Thursday and whose central demand is a R12 500 entry-level wage, will halt the production of an estimated 70% of South Africa’s platinum.

At an Amcu rally held at the Olympiad Centre Stadium in Rustenburg on Sunday, Mathunjwa read out a list of a handful of Amcu members who he said betrayed the union by starting a breakaway faction.

This led to an assault on an Amplats worker, Godfrey Lindani, a 2012 strike leader who had to be rescued by the police from the clutches of angry colleagues.

The spat continued well into this week, highlighting deepening fissures in the union and casting doubt on the motives for the strike and the levels of discontent surrounding it. Some workers have said that Mathunjwa feels indebted to the Lonmin workers and is using the other two mines to help to achieve the wage demand.

Thirty-four striking miners were shot dead by police at Lonmin’s mine near Marikana in 2012, which resulted in a large surge in Amcu’s membership.

There is also talk that some workers in the platinum belt were wooed into clandestinely accepting wage increases last year, which makes their participation in the strike questionable.

Face-to-face debate
I met Maqanda on Tuesday, after a rally for those who disagreed with the strike had failed to take off.

He was joined by fellow mineworkers George Tyobeka, Julius Mralathi, Gaddafi Mdoda and Lovers Mkhwa, who have been openly critical of the strike, citing a lack of consensus and a proper strategy.

Although the men, seated in a grey SUV driven by Tyobeka, claimed they were still members of the union, they repeatedly said they wanted Mathunjwa to participate in a face-to-face debate – "that man has no answers", they said. They also wanted him to retract his statements about their "betrayal" publicly.

At a press conference in Johan­nesburg this week, hosted by the Workers and Socialist Party, Mdoda said Mathunjwa had accused them of receiving cars and money from Amplats as a reward for aiding recent retrenchments.

He said Mathunjwa had also accused them of accepting about R16-million from the tripartite alliance to establish a new formation and weaken Amcu.

Mdoda said they and Amplats miner Thebe Maswabi, the alleged convener of the new group, had been accused of recruiting members for a breakaway union to be known as the Workers’ Association Union (WAU).

Mathunjwa did not respond to repeated calls this week but Amcu’s national treasurer, Jimmy Gama, said it had been confirmed that the men named had been drawing members away from Amcu.

"If their subscriptions are still being deducted to Amcu, it’s only for the time being," he said by phone this week.

"We respect the right of association and disassociation, if they feel they are not happy. But if they disassociate themselves from Amcu, they mustn’t claim defamation. We can also go the defamation route because they have been going around claiming that Amcu is a corrupt union."

The corruption allegations levelled against Amcu relate to the union’s "top 10" at Impala, an interim committee that has stayed on although it was never elected.

Workers say the group rides roughshod over tenders related to catering and burial services at the mine and has also collected R100 from each of the workers under the pretext of providing them with legal services.

Gama described these allegations as "wild" claims that are without basis. He also said the men who have supposedly broken away from Amcu represent a minority faction.

On Tuesday, a rally planned by the discontented shop stewards, for mineworkers with misgivings about the strike, was cancelled when it emerged that the Olympiad Park Stadium had been double-booked. A National Union of Mineworkers (NUM) event had apparently been planned for the same day. But both "rallies" were nonevents, with more police and traffic officials than Amcu and NUM members combined.

Talk among people who claim to have knowledge of union machinations in the platinum belt is that the WAU is being bankrolled by "anti-working class forces" and is a possible ploy by Luthuli House to weaken Amcu.

Mathunjwa’s rant on Sunday included the accusation that those he had named had "wined and dined with [President Jacob] Zuma" and had been funded to derail Amcu.

Maswabi, the only one who has openly admitted the existence of the WAU, said by phone this week that the project has been shelved until further notice.

He said Mathunjwa had been making wild claims about the people who were funding them "but the question is: Who is sponsoring him?"

The NUM’s Frans Baleni said that his union is not in any way involved in the breakaway formation, but that frustrated workers had been returning to the NUM.

"Others say: ‘We can’t come directly to NUM, because we believe we will be killed; we’d rather make a detour.’ But you can’t trust people like that, because once they establish the union and have positions of power, who knows if they will relinquish them," Baleni said.

Devan Pillay, a sociologist based at the University of the Witwatersrand, said Amcu had opened itself up to a challenge by not properly organising from the ground up, as any union should.

"It is some of the same strike organisers from 2012 that are now disaffected," he said.

"The way Amcu is organised leaves no room for people with disagreements to be heard, so this may be the start of continuous fragmentation.

"Amcu, having failed in properly developing structures, has every interest in labelling people, so we should be careful with labelling and suspicions," Pillay said.