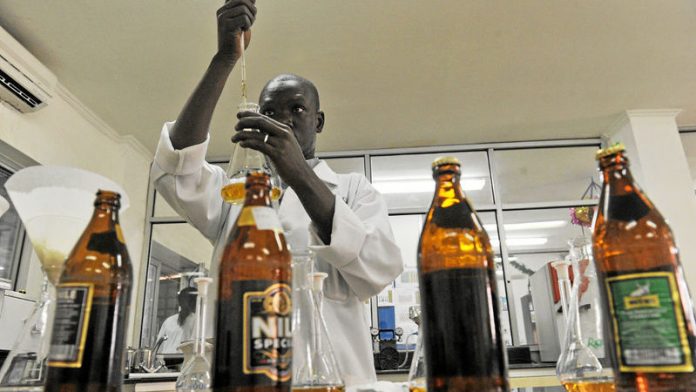 When the brewery shuts down, that's when you really need to start worrying. Any Africa hack will tell you that from eastern Democratic Republic of the Congo to Sierra Leone, even when war is at its worst, breweries continue to operate.

The crisis in South Sudan that started on December 15 has compelled embassies and nongovernmental organisations to evacuate staff and travel warnings have been issued for foreigners to leave the country immediately. According to the United Nations, more than 500?000 people have been forced to flee their homes and thousands have been killed because of the fighting.

But the South African- and United Kingdom-based SABMiller seems destined to follow in the footsteps of brave African producers that make sure villages across Africa get ?their beer, regardless of the circumstances. It's not going to be easy, however.

Established in 2009 and expanded during the euphoria of independence for South Sudan in 2011, the brewery remains the only manufacturer in the country's fledgling capital Juba, according to its spokesperson, Nigel Fairbrass.

When violence broke out at the end of last year, 53 SABMiller expatriates were evacuated to South Africa, the UK and Uganda and the brewery is now operating at only half its capacity.

"It is difficult to say when people will be able to return. The situation is very fluid," Fairbrass said from London when asked for comment this week.

Sales had been halted in the worst-affected towns such as Bor, he said.

The SAB experience reflects something of the disillusionment of those who invested on a massive scale in the country in the past three years, many of them South Africans.

Companies such as MTN and Standard Bank opened up shop on the back of the huge involvement by civil society and the South African government in the period just after independence.

South Africa at the time led the African Union (AU) reconstruction efforts in the country with university exchanges and the training of diplomats and the South Sudan Police Service. Former president Thabo Mbeki, who was a great supporter of the South Sudan project, is still heavily involved in Sudan and South Sudan as head of the AU's High Level Implementation Panel.

Violence that had been simmering in the country for months erupted into a civil war after President Salva Kirr accused his former vice-president, Riek Machar, of staging a coup. The violence has been described as largely ethnically driven between the Nuer, supporting Machar, and Kirr's Dinka tribe.

Despite the devastation, Standard Bank also said it continued to operate.

"We are obviously concerned about the current situation in the country and are monitoring events very closely," said Chris Newson, chief executive of Standard Bank Africa. "Our primary concern remains the safety of our staff, customers and their families, and we continue to be open for business with strong support coming from our Kenyan operation."

South Sudan expert Paula Roque said the conflict was a severe blow to development and business in the country, which took off only in 2011.

"It wasn't even a matter of rebuilding institutions, infrastructure and support structures for development, but rather starting from scratch, with entire sectors of the economy and service delivery needing to be organised and developed," she said.

Roque said that, although huge quantities of aid money flowed into the country after independence, those funds would now have to be used to look after the displaced and the humanitarian needs of those affected by the fighting.

Asked whether investors and the international community underestimated the underlying fault lines in the ruling Sudan People's Liberation Movement (SPLM), she said it was a "calculated risk" because the country had managed to sustain itself during the six-year-long peace transition (under the 2005 Comprehensive Peace Agreement), had a large UN peacekeeping presence and was monitored closely by implementation partners and donors.

"Investment and post-conflict reconstruction was the next step," said Roque, former senior researcher at the Institute for Security Studies in Pretoria and currently a PhD candidate on South Sudan at Oxford University.

"However, investors, like diplomats and the international community at large, seriously underestimated what political reform needed to be undertaken to allow for the SPLM to become a resilient vehicle to guide the country through nation and state building."

She said that, even though development projects had been halted, donors would not abandon the fledgling government.

"Too much effort has been put into stabilising the country and making sure that it is steered in the right direction to disengage completely now.

"This conflict has seriously damaged the credibility of the leadership in Juba and this may affect how the international community engages. There is also the geopolitical consideration that two unstable Sudans could plunge the region into unending instability."

Liesl Louw-Vaudran
Liesl Louw-Vaudran is an independent journalist and Africa expert. She lived in Senegal for many years and has reported from over 20 African countries. She is a regular commentator on African issues in the local and international media. From 2002 to 2008 she was the Africa Editor at Media24 newspapers in South Africa and still contributes to newspapers such as the Mail&Guardian in Johannesburg. Liesl also works as a consultant for the Institute for Security Studies, notably as editor of the African Union Peace and Security Council Report.
Facebook
Twitter
WhatsApp
Linkedin
Email
Telegram