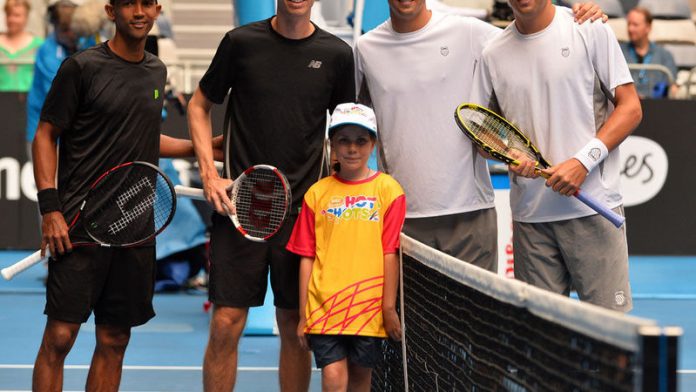 Klaasen and Butorac, unseeded, won through to the finals of the first Grand Slam of the year when the outplayed No. 8 seeds Daniel Nestor (Canada) and Nenad Zimonjic (Serbia) 6-2 6-4.

This was after Sports and Recreation Minister Fikile Mbalula made a surprise phone call to Klaasen on Thursday to wish him well for the semifinals match.

In a match that lasted only 64 minutes in the Rod Laver Arena, Klaasen and Butorac were the in form team from the start. They played a clinical match and proved how to combine and play as a team throughout. They got the basics right; good solid serving, effective returning and crisp volley placements to beat a team who combined had a total of 133 titles between them including 11 Grand Slam titles.

This is the first Grand Slam final for both Klaasen and Butorac and it was Klaasen's first Grand Slam semifinal appearance. Butorac reached the doubles semifinal in Melbourne in 2011 so came onto court with some added confidence and advice for his partner.

"I've been to the semifinals before but it is great to take a step further," said Butorac after victory.

"It's been a dream run for Raven and I so far and we having a great time on court."

Klaasen was delighted with his win.

Klaasen and Butorac now have beaten four seeded teams en route to the finals including a memorable 7-6 (9) 6-4 victory in round three against top seeds and world number ones, Bob and Mike Bryan, the sensational twin brothers from the USA. In the final on Saturday, Klaasen and Butorac will play the winner of the semifinal being played on Thursday – either No 14 seeded pair Lukasz Kubot and Robert Lindstedt (Swe), or the No 13 seeded duo of Michael Llodra (Fra) and Nicolas Mahut (Fra).

Klaasen and Butorac got the early break in the third game of the opening set when they put pressure on the fragile Zimonjic serve.

Two games later they broke Nestor to lead 4-1 and then held out to win the opener 6-2. Dressed in black, Klaasen and Butorac made 16 winners and only 2 unforced errors in the first set. Nestor and Zimonjic could only take five points against serve in the opener.

Showing high energy levels and good momentum, Klaasen and Butorac broke Nestor again in the fifth game of the second set when Klaasen, like a black panther on the hunt, crossed and put away a volley winner.

The South African/American team kept their composure and held serve to win the second set 6-4 and deservedly earn themselves a spot in the final. – Sapa