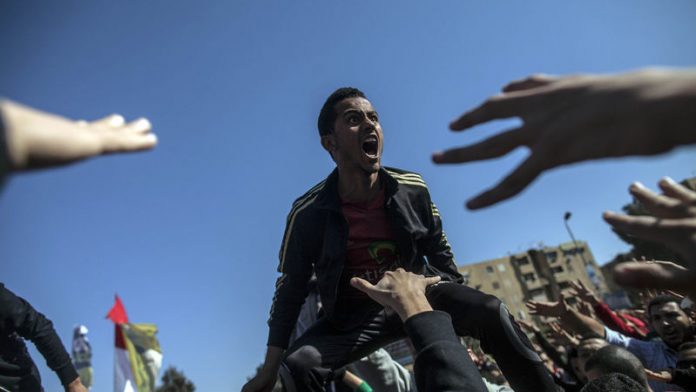 The divisions underscored the bitter polarisation since the 2011 revolt in which Egyptians of all political stripes united to demand the end of Mubarak's three-decade rule, galvanising the Arab Spring.

At least seven people were killed nationwide when police and supporters of the military-installed government clashed with Islamist backers of former president Mohamed Morsi, who was deposed in July after a single turbulent year in power.

Egypt was already on edge after four bombs exploded in Cairo on Friday, including a massive blast outside police headquarters. The attacks, which were claimed by a Sinai-based extremist group, killed six people.

Hours before Saturday's rallies, a small bomb outside a police training centre in north Cairo wounded one person, the ministry said.

Elsewhere, a car bombing at a police base in the canal city of Suez wounded at least 16 people, the ministry added.

Targeting police
An al-Qaeda-inspired group – Ansar Beit al-Maqdis, or Partisans of Jerusalem – claimed responsibility for Friday's bombings, all of them targeting police, and urged ordinary Egyptian "Muslims" to stay away from police buildings.

Police were deployed across Cairo as supporters of Morsi launched small counter-demonstrations to the commemorations called by the authorities, which were concentrated in Tahrir, epicentre of the 2011 revolt.

Police fired tear gas and birdshot to disperse one protest outside a Cairo mosque, an Agence France-Presse correspondent reported.

Five were killed in clashes in greater Cairo and two in the province of Minya to the south, the health ministry said, after 15 people were killed nationwide in similar clashes on Friday.

One of the dead in Cairo was a member of the April 6 movement, which spearheaded the uprising against Mubarak and had also opposed Morsi, a member of the group told AFP.

Police, who have killed hundreds of Islamist protesters in street clashes since Morsi's overthrow, have vowed to halt all such demonstrations.

They have encouraged Egyptians to turn out in support of the government and some politicians called for rallies to back Sisi, the general who overthrew Morsi and whose popularity has skyrocketed among Egyptians craving stability after three years of turmoil.

The military said it was investigating the cause of Saturday's crash in a region that has seen escalating militant attacks targeting the military and security forces.

Mubarak was forced to step down on February 11 2011 after 18 days of demonstrations that left some 850 people dead, ending his three decade rule of the Arab world's most populous country.

The military took power until Morsi's election in June 2012 but then toppled him a year later, in July, after millions took to the streets demanding his resignation, accusing him of betraying the "revolution" that toppled Mubarak.

In Tahrir on Saturday, tanks guarded the entrances to the square as demonstrators waved Egyptian flags and carried posters of Sisi.

"The people demand the execution of the Brotherhood," demonstrators chanted, as several took their pictures with police officers, soldiers and tanks.

Bloody crackdown
Government and military officials have hinted for days that the turnout at Saturday's pro-government rallies could be a bellwether for a run by Sisi in a presidential election promised for later this year.

Sisi is widely seen as a strongman who can restore order and fight militancy, which the interim government blames on Morsi's Muslim Brotherhood.

The Brotherhood, which renounced violence decades ago and won a series of elections following Mubarak's overthrow, condemned Friday's bomb blasts, as they have previous attacks on the police and army.

But following a previous attack on a police building in December, also claimed by Ansar Beit al-Maqdis, the authorities declared the Brotherhood a "terrorist organisation," making even expressions of verbal support punishable by heavy prison sentences.

Security forces have waged a bloody crackdown since Morsi's overthrow that has seen at least 1 000 people killed and thousands of Islamists arrested, including virtually the entire top Brotherhood leadership. Morsi has also been jailed.

Rights group Amnesty International said there had been "state violence on an unprecedented scale over the last seven months". – Sapa-AFP