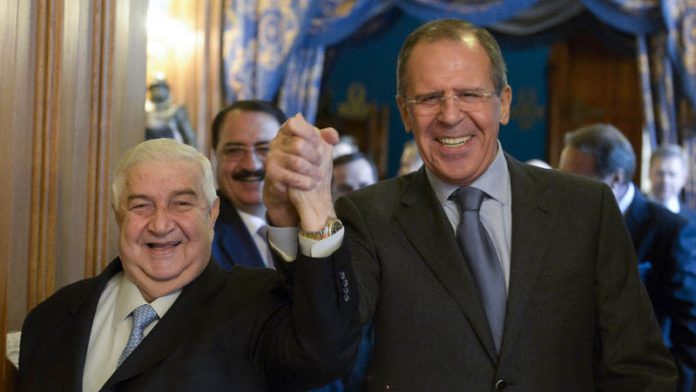 The United States on Monday demanded that Syria allow aid into the "starving" city of Homs, as talks aimed at ending three years of civil war hit more trouble over the future of President Bashar al-Assad.

The Syrian government said women and children could leave the besieged city and that rebels should hand over the names of the men who would remain, but a US state department spokesperson said an evacuation was not an alternative to immediate aid.

"We firmly believe that the Syrian regime must approve the convoys to deliver badly needed humanitarian assistance into the Old City of Homs now," said spokesperson Edgar Vasquez.

"The situation is desperate and the people are starving." He said the people of Homs must not be forced to leave their homes and split up their families before receiving food and other aid.

The UN mediator said he hoped Monday's talks in Geneva could tackle the central issue that divides the two sides – Syria's political future and that of Assad – but both sides immediately adopted entrenched positions.

Syria's government delegation presented a document for negotiation which did not mention a transition of power, Syrian television said.

The government's "declaration of basic principles" said Syrians would choose a political system without "imposed formulas" from abroad, an apparent reference to Western and regional demands that Assad step down.

The opposition, which wants Assad to quit as part of arrangements for a transitional government, immediately rejected the proposal.

"The declaration is outside the framework of Geneva, which centres on creating a transitional governing body. It fails to address the core issue," the opposition's chief negotiator, Hadi al Bahra, told Reuters.

Syrian Deputy Foreign Minister Faisal Mekdad said he would meet UN mediators following the opposition's rejection of the government's proposal. "We are here to discuss terrorism, not a transfer of power," he said, using the government's blanket term for the revolt that grew out of peaceful protests in 2011.

Strategic location
Homs, occupying a strategic location in the centre of the country, has been a key battleground. Assad's forces retook many of the surrounding areas last year, leaving rebels under siege in the city centre, along with thousands of civilians.

Mekdad told a news conference on Sunday the government would let women and children leave the city centre if rebels gave them safe passage.

UN mediator Lakhdar Brahimi said he understood they would be free to quit Homs immediately. Western diplomats said the Syrian government should move quickly to allow aid in or face a possible United Nations Security Council resolution, with Russia and China being urged to reverse their opposition to such a move.

"The ball is still in the regime's court. We understand that a report has gone back to Damascus seeking instructions," one diplomat said.

In Homs itself, opposition activists said rebels demanded a complete end to the blockade, not just a limited ceasefire.

An online video showed demonstrators with Islamist flags denouncing the Geneva talks as "treachery". It highlighted one of the difficulties of the Geneva talks – the opposition delegation only represents some of the rebel factions on the ground.

Powerful Islamist fighters allied to al-Qaeda are not represented at all.

Brahimi acknowledged the slow start to proceedings, which began with a formal international conference on Wednesday. "This is a political negotiation … Our negotiation is not the main place where humanitarian issues are discussed.

"But I think we all felt … that you cannot start a negotiation about Syria without having some discussion about the very, very bad humanitarian situation that exists," he said.

Prisoners
Brahimi said opposition delegates, who have asked for the release of nearly 50 000 detainees, had agreed to a government request to try to provide a list of those held by armed rebel groups – though many of these groups, fighting among themselves, do not recognise the negotiators' authority.

Mekdad said the government had examined an opposition list of 47 000 people believed to have been arrested by Assad's forces and found most had either never been held or were now free. He also denied that any children were being held.

Underlining the difficulty of implementing even local agreements on the ground, a UN agency trying to deliver aid to a besieged rebel area of Damascus said state checkpoints had hampered its work, despite assurances from the government that it would allow the distributions. – Reuters