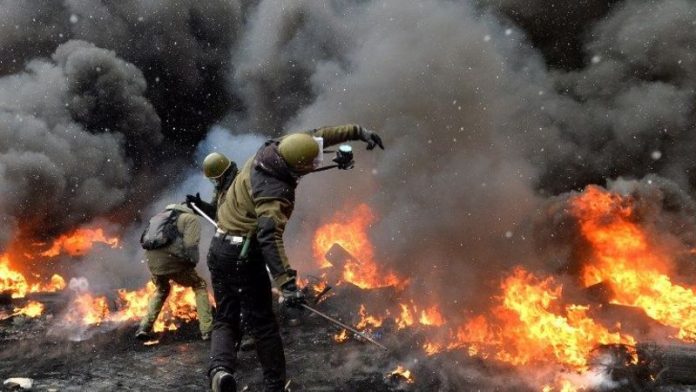 Ukraine's justice minister has threatened to call for a state of emergency unless protesters leave the ministry building they occupied during the night.

The seizure of the building early on Monday underlined how anti-government demonstrators are increasingly willing to take dramatic action as they push for the president's resignation and other demands. Protesters now occupy four sizeable buildings in central Kiev, including the city hall.

Justic Minister Elena Lukash said early on Monday she would ask the national security council to impose a state of emergency if the protesters did not leave the building. She did not specify a deadline for leaving.

Imposing a state of emergency would be likely to further anger protesters, who on Sunday mourned Mikhailo Zhyznevsky, one of at least three victims of clashes between police and protesters last week. Thousands marched behind the coffin carrying the body of Zhyznevsky, a Belarusian who lived in Ukraine. He died of gunshot wounds.

The sombre procession came as the three political leaders who have become the de facto leaders of the protests pondered a surprise offer of concessions extended to them on Saturday by the president, Viktor Yanukovych. As the tense stand-off between protest barricades and riot police continued in Kiev, and unrest spread to the rest of the country, the president offered a wide range of concessions during negotiations with the leaders.

Negotiations
The opposition leaders have reacted cautiously to the proposals, rejecting them but saying they are open to further negotiations. The mood on Independence Square is that nothing short of snap presidential elections will be enough to disperse the crowds from central Kiev and calm the tension. Political leaders fear that if they do accept any other deal, they will lose the protest mandate and harm their own political chances.

Yevgeniya, a 68-year-old from Kiev who was on Independence Square, said: "We know what this president is like. Power sharing won't work. It will be a trap. He has to go. Nothing else will do."

She said the violent clashes that broke out last week worried her, but were a sign of desperation: "They are young lads and of course they have hot heads. But it's the president's fault that it has come to this. It took people dying for him to listen to us."

In recent days, the problems for Yanukovych have intensified as the protest movement has spread from Kiev to more than a dozen regional cities, with crowds storming regional administration buildings and in some cases building barricades around them. On Sunday this new phenomenon spread to a number of cities in the east of the country, traditionally the president's stronghold. – guardian.co.uk © Guardian News and Media 2014