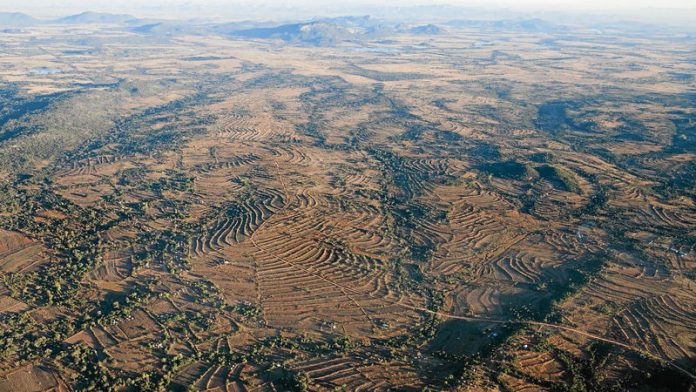 The failure by the 83-year-old state-run Grain Marketing Board (GMB) to pay producers for their grain in recent years has short-circuited the ability of small-scale farmers to generate cash flow to fund agricultural inputs for the following season – a problem recognised by President Robert Mugabe's ruling Zanu-PF party.

The Zimbabwe Vulnerability Assessment Committee, with a membership drawn from the government, the UN World Food Programme and other partners, estimates that 2.2-million people, or a quarter of the rural population, require food assistance during the 2014 "lean season" – the few months before the harvest in March.

Small-scale farmers are the backbone of the country's food security and provide about 70% of its staple crop, maize, according to agricultural analysts and government estimates.

Denford Gwara (48), a small-scale farmer who used to produce wheat and maize on 40 hectares of land in Mazowe, Mashonaland Central province, told IRIN the GMB owed him $9 000 for produce he had delivered in the past two harvests.

"I have visited GMB on numerous occasions but they keep telling me that government has not given them money to pay me. Last year, they offered to pay off part of the debt with fertilizer and maize seed, but only gave me a few bags, which were too little for me to make any meaningful farming," he said.

As a result, he has had to reduce the area of land he tills to only five hectares, and had to sell his old truck to raise money for inputs.

"I know of many farmers in this area who are crying because their ability to farm has been badly affected by GMB's inability to pay them. Many people used to admire me for the many tonnes of wheat and maize I used to produce, but I can hardly keep my children in school now," he said.

The GMB's primary role is to ensure national food security by promoting crop production – mainly cereals – as well as the procurement, free distribution and sales of harvested grains, and managing the country's strategic grain reserves. It also has a commercial department that processes and sells agricultural products such as oil seeds, rice, groundnuts, coffee and popcorn.

At a recent media briefing in the capital, Harare, Minister of Agriculture Joseph Made said, "At the moment, most farmers are using limited financial resources. They need the money that GMB owes them. Government cannot expect farmers to produce when it is failing to pay them for their produce."

Made acknowledged that the GMB owed farmers more than $6-million. He said his ministry was "battling with treasury" and hoped the finance ministry would "assist, so that farmers have the money they need to finance their operations".

The GMB's general manager, Albert Mandizha, dismissed the complaints of small-scale farmers in 2013, claiming the organisation had paid 98% of all monies owed to them. "I am ashamed of Zimbabwean farmers. You are an embarrassment because you have forced us to import grain," he said.

Subsequently, GMB spokesperson Muriel Zimunya told IRIN in written responses to questions about delayed payments that the board needed to "incentivise farmers by paying promptly".

Even before the land reform programme in 2000, when about 4 500 white-owned farms – accounting for about 39% of the country's land – was redistributed to an estimated 245 000 black farmers, small-scale farmers were a central pillar in the nation's food security.

After independence from Britain in 1980, price controls on maize increased the trend by white commercial farmers to resort to cash crops like tobacco, paprika, cut flowers and cotton, and growing yellow maize for stock feed, entrenching cereal production as largely the preserve of communal black farmers.

In the aftermath of the land reform programme, large-scale agro-businesses collapsed, as did the access of small-scale farmers to cheaper agricultural inputs facilitated by the large-scale demands of commercial farmers. The imposition of sanctions for human rights abuses further squeezed an already fragile economy.

A 2012 report on Zimbabwe's agricultural reconstruction, jointly commissioned by the Development Bank of Southern Africa (DBSA) and the French Agency for Development (AFD) listed deteriorating infrastructure for the marketing and movement of produce, and the limited access of farmers to finance, among the constraints to productivity.

It noted that shortages of fuel and power, in addition to poor training and limited agricultural extension services, were also hampering food production.

Eddie Cross, a farmer, agricultural consultant and member of the opposition Movement for Democratic Change (MDC) party, told IRIN the failure by GMB to pay farmers timeously was "a serious issue that requires urgent government intervention".

"In the old days, farmers would get their money within a week after delivering produce. The farmers would then start planning for the next farming season and know how much to set aside for personal consumption. They would be able to buy inputs on time and before prices shot up, unlike now," Cross said.

He estimated the number of small-scale farmers in Zimbabwe – those on communal land as well as those resettled through land reform – at about 700 000, noting that about half of them had been "severely affected" by non-payment or delayed payment from the GMB.

"It is confusing that the government is prepared to annually hunt for money to import food, when it should be prioritising raising money to allocate to GMB for farmers' payments as a way to ensure that production improves," he said.

"While a significant number of farmers [are] now preferring to either hold onto their produce or sell to private buyers, thousands still surrender their crops to GMB because they keep getting promises that this time around, their money will be paid promptly," Cross said.

Hyperinflation's hangover
The Zimbabwe Commercial Farmers' Union (ZCFU) said the GMB started struggling to make timely payments to farmers in 2009, when the government adopted a multi-currency system and abandoned the local Zimbabwe dollar to escape hyperinflation that had affected the economy from the early 2000s.

"GMB still owes farmers money dating back to that period [2009] and, currently, tens of thousands of farmers are yet to get their cash for delivering maize and other crops to the parastatal, and this is a national disaster," Wonder Chabikwa, the ZCFU president, told IRIN.

"The failure by GMB to make timely payments has affected national production. Smallholder farmers form the bulk of those affected, but those farming on a commercial basis are also victims.

"If the farmers are not paid on time, where do they get the money to buy inputs and equipment for use in the next farming season? What it means is that they reduce their hectarage, or completely fail to till their land. Those that can, would have borrowed money to farm, and their property is attached by banks and other lenders when they are not paid," Chabikwa said.

"Granted, drought and the delayed distribution of inputs are also behind poor agricultural production – particularly that of maize – over the years," he said. "But one untold story is that GMB's inability to pay farmers is a major factor that has affected their capacity to prepare and produce meaningful yields, leading to recurrent food insecurity." – IRIN