Adebayor gets his kicking boots back 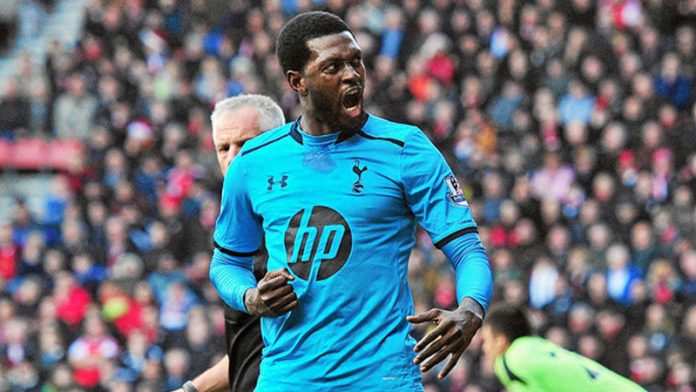 Emmanuel Adebayor's residence in Ghana had some illustrious guests in June last year. Samuel Eto'o, Michael Ballack, Jay-Jay Okocha, Michael Essien, Florent Malouda and Djibril Cissé were among those who made the place their hangout. It is fair to say that good times were had. Either they went out or the party came to them.

There was a daily feature at 5am. Adebayor would be going through the Insanity fitness programme he followed with his personal trainer. Insanity is an extreme workout from the United States and the name does it justice.

One of Adebayor's non-footballing guests joked that the five-minute warm-down almost killed him.

Adebayor was focused. The Tottenham Hotspur striker did not drink and he held it down on the party front. He swam lengths of the pool in the afternoons like a demon. His plan was not merely to be ready for the beginning of pre-season training but also to report in peak condition.

He felt as though he had something to prove after a disappointing season in which he had scored only eight goals for Tottenham and had his attitude questioned. There was the red card in the derby at his former club Arsenal and the pantomime relating to his late return from the Africa Cup of Nations with Togo. He also struggled with injuries.

Adebayor would hear Eto'o, chipping away in his ear, calling him "little man".

"Hey little man, you want to see some trophies. I've got three Champions Leagues, two Africa Cup of Nations … " the Cameroon and Chelsea striker would say. All good fun but no competitor likes to be on the receiving end.

Adebayor was on a mission to shut people up. Then he had his world turned upside down.

Tragedy strikes
To appreciate the reasons for Adebayor's patch of six goals in eight games, which he couldn't add to in the 5-1 drubbing by another one of his former clubs, Manchester City, at White Hart Lane on Wednesday night, it is necessary to wind the clock back to the English summer, when the adrenaline and the anticipation were suddenly lanced by tragedy.

On his arrival in Hong Kong for the Barclays Asia Trophy towards the end of July, Adebayor learnt of the death of his elder brother, Peter. One day, Peter was seemingly healthy and happy; the next he was gone.

Adebayor had previously buried his father. He had buried members of the Togo national team after the fatal attack on their bus before the 2010 Africa Cup of Nations. Now it was Peter.

Adebayor was upset and angry. He played against Sunderland in the opening game of the pre-season tournament but his head and his heart were not in it. He argued with André Villas-Boas in Hong Kong, in front of the squad, after the then manager made a comment about Michael Dawson being his best defender. Adebayor disagreed. It was something and nothing, but it shone a light on the pair's fractious relationship. Villas-Boas perceived a threat to his authority.

Adebayor was granted extended compassionate leave – he made two trips to Africa to arrange Peter's funeral – but, when he returned to Tottenham in September, he was told, not by Villas-Boas but by one of the club's physios, that he would have to train with the youth team.

Dropped
Villas-Boas's reasoning was that Adebayor had dropped behind the other first-teamers in terms of fitness and he would be better off working on a specially tailored programme away from them. Scientifically, it may have been the correct decision but, in human terms, it was not.

Adebayor resolved to compartmentalise his professional problems. When he was asked to apologise to the squad for any disrespect he might have shown to smooth his way back into first-team training, he did so. He made sure that he was early for training. He worked hard.

The old Adebayor would have downed tools and sought a move. But the 29-year-old is more mature these days; his Christian faith is stronger.

Villas-Boas continued to overlook him, apart from when he gave him a run in the second half of the disastrous 6-0 defeat at City on November 24. By the time that the team lost 5-0 at home to Liverpool on December 15, the chairperson, Daniel Levy, had added Adebayor's treatment by the manager to the list of complaints that he had against the Portuguese. Levy pays Adebayor handsomely. He does not do so for him to sit in the stands.

When Villas-Boas was sacked his replacement, Tim Sherwood, reinstated Adebayor for the Capital One Cup quarter-final at home to West Ham United. The striker played as if on an Insanity work-out. He could give vent to months of frustration but he channelled it and, when the big chance came, he crashed a stunning volley in off the underside of the crossbar.

No half measures
On his first start in seven months, the quality was practically insulting and it reinforced a narrative that has long stalked Adebayor – with him, there are simply no half measures.

Sherwood describes him as a "warrior" and "one of the top players" in England.

"He is cleverer than people think," Sherwood adds. "Adebayor realises and he learns from his mistakes. He is a total professional and he is really focused game to game."

Adebayor likes Sherwood, just as he did Harry Redknapp, under whom he excelled in 2011-2012, when he was on loan from City. One of the first things that Sherwood said to Adebayor was that he believed in him and he has played him up front with a strike partner.

Because of his height, there is the temptation to stereotype Adebayor as a No 9, as a big target man, but he is more of a No 10, who likes to drop off and work with another forward. Villas-Boas never really got to grips with Adebayor, either as a man or a player, and the Togolese struggled as his lone striker last season.

It has been a long road, heavy on sharp turns, but at last Adebayor can step on the gas. – © Guardian News & Media 2014