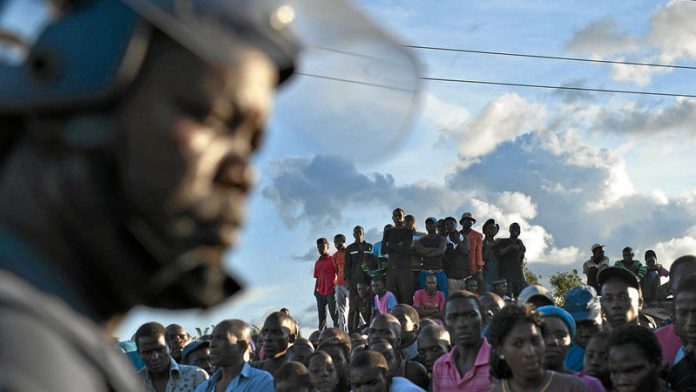 Early on Thursday morning, the house, shop and three cars of a businessman in Kubjana, 30km north of Tzaneen, were set on fire by an angry crowd from surrounding villages. But by the time his property went up in flames, he was already in a place of safety arranged for him by the police.

The night before, three children aged between three and five years old were discovered on the back seat of one of his cars. One of them was dead. According to Limpopo police spokesperson, Ronel Otto, at about five o'clock on Wednesday afternoon, the man discovered the children and phoned the police.

Later on Thursday, the residents of Kubjana – not far from Relela where police shot and killed three people in recent running battles – blocked off access roads as police used tear gas and fired rubber bullets to disperse them. Four policemen were injured in the skirmishes, Otto said.

At Kubjana's main entrance, a barricade was erected, anchored to a large tractor tyre from which plumes of black smoke poured into the air. From the side roads, youths high on adrenaline, swore and threw rocks at vehicles.

A postmortem is being held to establish the cause of the child's death, which brings the week's toll of fatalities in the villages just north of Tzaneen to five.

First death
The first death took place on Friday last week when a Relela woman's hand was chopped off. It is believed to have been a ritual killing associated with the acquisition of wealth.

A cellphone photograph widely circulated among those living in the villages shows the body of Kgomotso Rakgolane (20) on a gravel road near Relela. She is wearing a pink and white T-shirt, and a cellphone and house keys have been placed on her white underwear. Her left arm appears to be tied and slung across her chest. A pool of blood is visible.

National police commissioner Riah Phiyega told the media on Wednesday that Rakgolane's body was discovered last Friday and one of her hands was missing.

But Rakgolane's death generated more outrage than others. People feel the situation has reached the point where "there is no justice any more because often police take bribes and killers walk free".

Suspect killed
On Saturday, three men were taken in for questioning and then released, Phiyega said, standing next to the damaged Relela satellite police station. The community then went to the men's homes and two were burnt down. She said 1 500 "violent people" were on their way to burn down the third house when the police intervened. They were allegedly stoned by the protesters and, in the process of defending themselves, Tshepo Baloyi (15) was killed with live ammunition.

Phiyega glossed over the incident and did not deal with the widely reported version that Baloyi was returning home from running an errand for his mother.

On Tuesday, the community marched on the satellite police station in Relela, demanding that the police find Rakgolane's right hand and arrest those responsible for killing Baloyi. The police claim that the building was stoned and about 20 policemen were trapped inside.

Phiyega said 2 050 rounds of rubber bullets and 50 stun grenades were used by police and they arrested nine people involved in the attack.

But, fearing for their lives, she said police had used live rounds, which are "believed to lead to the death of two people".

Olivia Selowa, the sister of Mohale Selowa, one of those killed by the police, said she had last spoken to her brother over the phone a few hours before his death.

"At around 7pm, I heard from an aunt of mine that he was dead," she said. "I don't know how many shots were fired at him but I know he suffered a gunshot wound to the chest.

On Thursday, the nine protesters, including a nine-month pregnant woman, who were arrested on Tuesday, were denied bail.