A peek through the world of science fiction 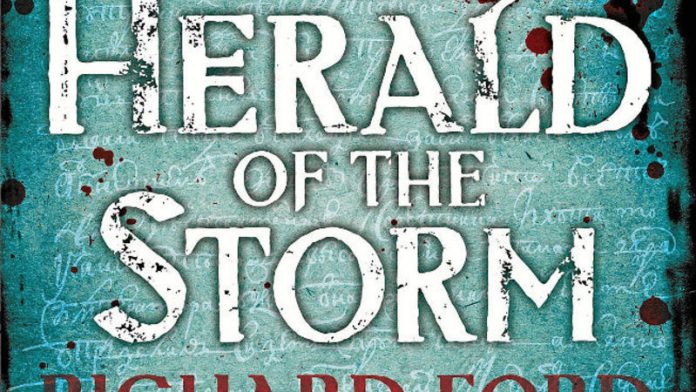 HERALD OF THE STORM (Steelhaven: book one) by Richard Ford (Headline)
The back cover shout cannot avoid the familiar words: "A terrible dark magic that has long been buried once again begins to rise." And so here we are, back in the territory where bitter mercenaries reveal soft centres as they fall for feisty princesses and everybody in the feudal port city of Steelhaven talks in Joe Abercrombie-style modern dialogue. The gang's all here: to quote the cover again: "An unbalanced veteran, a disillusioned assassin, a hapless apprentice, a drunken swindler, a desperate thief." And, to be fair, Ford does an excellent job of stringing overfamiliar tropes together to create a decent adventure; terse wit and taut action are his strengths. You'll only be bored if you're expecting any surprises.

LEXICON BY Max Barry (Mulholland/Hodder)
Reviewers seem nervous about employing the word "fantasy" to describe Max Barry's latest speculative outing, but that's exactly what the author of 2003's smartly satirical Jennifer Government has created in Lexicon, his fifth book. Within the trappings of a sci-fi conspiracy thriller – the book opens as a man is tortured, having been abducted in an airport – Barry interrogates what magic might retain to function in the modern world. His answer is its language: compelling words, sounds and syllables descended from the spells of ancient sorcerers and shamans. The meticulously constructed magic system is given Barry's customary twist: its power can be magnified using modern psychological profiling techniques – a device that offers lots of space for satirising modern advertising and mass communications. But when the modern magicians (called Poets) fall out, the world shimmers on the edge of catastrophe. Compelling characters – especially street-hustler-turned-uber-Poet Emily Ruff – and tight plotting make Lexicon a gripping read. But it is also a deeply romantic tale, in which one of the most compelling words turns out to be "love". A Space Merchants for the 21st century and every bit as intriguing as that masterwork was.

THE ADJACENT by Christopher Priest (Gollancz)
Distinguished science fiction veteran Christopher Priest turns to the world of alternate universes in this, his 16th novel. The underlying science is "adjacency": a technique for apparently annihilating objects, people, whole districts, by moving them into the spaces between the spaces implied by quantum physics. We encounter characters who may or may not represent versions of the same entity: near-future photographer Tibor Tarent, World War I stage magician Tommy Trent, World War II Polish pilot Tomasz and British engineer Torrance, and illusionist Tomak Tallant. Tallant lives in Priest's familiar fantasy landscape, the Dream Archipelago, among a people called the Prachoits. The Dream Archipelago might be the place to which adjacency shifts things; its sprawling, chaotic shanty town is called Adjacent and no one knows how its inhabitants arrived. But – as in Lavie Tidhar's Osama – space and time leak, creating disturbing encounters across dimensions and distorted relationships between near-equivalents. Drift with this, and Priest's kaleidoscope of universes is as absorbing as an opium dream. There are, though, a few sticking points. The characters are cardboard, so that even the grand cross-dimensional romance threading through the narrative fails to convince. Everybody – male, female, young, old, Polish, English or Prachoit – speaks in the same voice: that of an elderly Englishman who sounds like Priest. For no apparent plot reason, near-future England has become the Islamic Republic of Great Britain, a vehicle for casual (and possibly not even intentional) Islamophobia where every burka becomes "a shroud". It's a book of profound, magical possibilities that ultimately disappoints.

TUF VOYAGING by George RR Martin (Gollancz)
The success of Game of Thrones has set publishers feverishly digging through the George RR Martin archive for stuff they can re-publish to cash in on the name. Tuf Voyaging first appeared as a series of space-opera novellas in the early to mid-1980s, tied together by the character of eccentric, vegetarian, cat-loving trader Haviland Tuf. Here, they're collected into a single volume, starting with the tale of how Tuf acquired the last seedship surviving from the Ecological Engineering Corps of Earth's long-defunct space empire. Martin always was an accomplished storyteller, and the stories have survived three decades relatively well, give or take some passages of whimsy and some absolutely thumping sledgehammer moralising. It's fun, but not a patch on Game of Thrones.