Platinum rides on the weak rand

With more than 70 000 workers on strike at the country's three largest platinum mines — Anglo American Platinum, Impala Platinum and Lonmin — the industry is losing about R154-million a day.

But the weak currency and reduced supply mean that rand platinum prices are at a five-year high, and some of the mining houses are seeing higher profits and share prices as a result.

Members of the Association of Mineworkers and Construction Union (Amcu), now the dominant union on the platinum belt, began striking last Thursday in an effort to force mining houses to agree to an entry-level salary of R12 500.

The three major mines are losing a combined 9 900 ounces of platinum a day as negotiations, brokered by the Commission for Conciliation, Mediation and Arbitration (CCMA), continue.

But the weak rand has shored up some of the losses of the mining houses, which sell their product in dollars but incur the bulk of their expenses in rands.

Prices go up
Rand platinum prices are about 35% higher than they were in August 2012, which is the last time the sector saw unrest on this scale, historically marked by the Marikana tragedy of August 16. Prices have gone up from about R11 500 an ounce in August to more than R15 600 on Wednesday afternoon.

"Given the state of the sector, the weak rand is a welcome boost," said Nic Norman-Smith, the chief investment officer of Lentus Asset Management. "Over the long term, the prospect for platinum is positive. Valuations [for the sector] are still very attractive."

The FTSE/JSE platinum and precious metals index is slightly higher than it was at the time of Marikana. In August 2012, the index hovered at between 48 and 50 points.

It peaked at 59.66 points at the beginning of February last year, then dived down to 35.51 at the end of June. But the index has rallied since then, closing at 54 the day after the strike began, and working its way incrementally downwards to 52 on Wednesday.

Investors who bought at the time of the Marikana incident and held on to their shares will have found the sector's performance almost flat since then.

But Norman-Smith warned that mining companies are working off a higher cost base now than in August 2012. "The cost bases have definitely risen since Marikana," he said. "That obviously hurts profitability."

Share prices volatile
The share prices of the major producers have been volatile, with some gains and a few drops since the strike began. Amplats, the biggest of the producers, has seen its shares gain 0.8% in the past week.

Last week it announced that it expected a profit from its recently ended financial year, after suffering losses the year before.

Earnings per share excluding one-time items will be between R4.80 and R5.90 for the 12 months ended in December 31, compared with a loss of R5.62 the year before, the company said in a statement.

The increase "is primarily due to higher sales volumes and a favourable rand-dollar exchange rate," it said. Over the past month, Amplats shares have rallied by 9.5%.

Lonmin has seen a similar gain, up by 0.7% since the strike began and 7.2% over the month. It hit a one-year high on January 23, at R58.59 a share. Its price-to-earnings ratio at 12pm on Wednesday was 20.16, less than half that of the platinum and precious metals index.

Implats has fared the worst of the big three, with shares dropping 4.3% over the past week and a loss of 1.9% over the month.

Still priced very attractively
The company's price-to-earnings ratio was 37.33 at midday on Wednesday, about 4.5 points lower than the ratio of the JSE/FTSE platinum and precious metals index of 42.18.

"Share prices have been quite volatile but they're off their lows," Norman-Smith said. "If you look at most fundamental matrices, they are still priced very attractively."

Although Norman-Smith said that platinum is "one of the few attractive opportunities [in the local resource market]", others say the long-term outlook for the sector is bleak.

"The real picture is that the South African platinum mines remain in dire straits — probably worse than the situation of a year ago," Business Day quoted Cadiz mining analyst Peter Major as saying.

"My view is to avoid platinum stocks. The government and the unions simply do not understand the real technical, financial and economic crunch facing the platinum mines."

It is believed that Amcu snubbed an offer of an 8% to 8.5% increase before downing tools. Government figureheads have become involved in the wage negotiations, indicating how pivotal smooth labour relations in the sector are to the economy.

Presidential warning
The day after the strike began, Labour Minister Mildred Oliphant and Mineral Resources Minister Susan Shabangu met with the unions, mining bosses and the CCMA. In September last year, President Jacob Zuma warned that an imminent strike in the gold sector could harm the economy and cause mine closures.

Addressing the public after unexpectedly increasing the repo rate to 5.5% on Wednesday, Reserve Bank governor Gill Marcus said that "the extent to which the strikes in the mining sector and resulting decline in exports are likely to impede the current account … will depend on the duration of the strikes and the extent to which lost output can be compensated for by running down inventories." 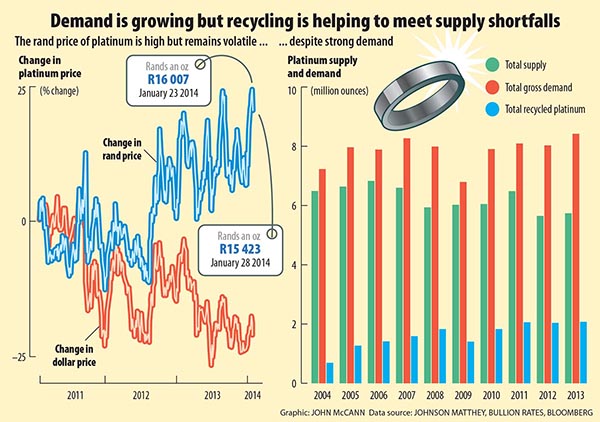