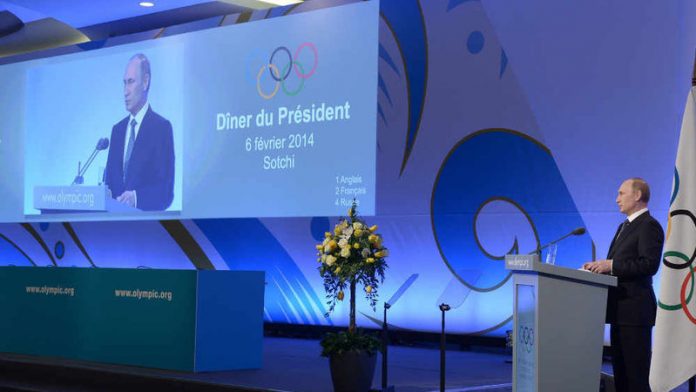 With the 2014 Winter Olympics beginning on February 7, Russia's President Vladimir Putin has high hopes that a successful event will enhance the international reputation of Russia. As a project of the utmost personal importance for Putin, an estimated $51-billion has been spent making these Olympics easily the most expensive in history, and more than three times as costly as the London 2012 summer Games.

Ironically, it is partly because of this lavish spending (which has spawned allegations of corruption and cronyism) that Sochi is unlikely to have the positive public relations impact for Russia that Beijing 2008 and London 2012 did for China and London respectively.  Indeed, there is a risk that Sochi could become the most controversial Olympics ever.

To be sure, other winter and summer Games have also had significant tensions, and some have even been boycotted, such as the last Olympics in Russia (1980 in Moscow), following the Soviet invasion of Afghanistan.  While there will be no such major boycotts this time around, the Sochi Games are nonetheless raising headlines mainly for the wrong reasons, ranging from concerns about the damage to the environment from construction of key infrastructure; the threat of terrorism; and protest at Russia's new homosexuality law.

On the gay rights issue, some athletes have also criticised the International Olympic Committee and key sponsors for not pressing this more publicly with Putin. However, for the president, this legislation is part of a wider, populist political agenda in Russia of defending what he views as traditional family values and opposing gay marriage.

But he has promised these positions will not influence Russia's administration of the Olympics and has attempted to defuse the homosexual rights issue with a twin track strategy. Firstly, he clumsily indicated that gays are welcome in Sochi provided that they "leave children in peace" (implicitly equating homosexuality with paedophilia).

He has been more sure-footed, however, with a carefully timed series of amnesties and pardons for high-profile imprisoned figures, including the former Yukos head Mikhail Khodorkovsky, the Pussy Riot band members; and numerous Greenpeace activists charged for hooliganism after an Arctic oil drilling protest. These moves are tactically astute by Putin, as international protest at the continued imprisonment could have marred the games. Instead, the amnesties and pardons have, at least partially and temporarily, muted some of the president's human rights critics, both domestically and internationally.

Gay rights, human rights
Nonetheless, the gay rights issue will not go away, and this is likely to be evident to the estimated 3.5-billion watching the event on television. One reason for this is that US President Barack Obama and some other world leaders have already declined to attend Sochi, some of them partly for human rights reasons.

A second reason why this issue will not disappear is that gay rights campaigners, some of whom assert Sochi is reminiscent of the 1936 Games in Nazi Germany, which took place in an atmosphere of anti-Semitic backlash, will wear branded clothing highlighting Principle 6 from the Olympic charter.  Principle 6 articulates the Olympic movement's opposition to all forms of discrimination.

Massive spending
The Games have also come under financial-related criticism. Aside from allegations of corruption and cronyism, there is the almost farcical expenditure by the organisers on huge masses of artificial snow. A large number of snow-making devices have been brought in, plus an estimated half a million cubic metres of snow from last year has been "put on ice" for use during the Olympics.

Such extraordinary measures are necessary because Sochi is in fact a sprawling sub-tropical sea resort which, through massive reconstruction works, has been shaped into an Olympic site. While snow-related sporting events will be held at Krasnaya Polyana in the Caucasus mountains, the temperature of Sochi itself is typically mild in winter with warm to hot summers.

According to the 2010 Russian Census, Sochi City has a permanent population of around 350 000 and the infrastructure for it and surrounding areas have therefore needed to be massively revamped to handle the large number of athletes and visitors this month.

Terrorism
One other key source of controversy surrounds the potential for terrorist attacks, despite the massive security forces manning the Olympics sites. Putin has amassed numerous enemies, especially in the troubled North Caucasus.

Predictably, therefore, perhaps the principle threat of attack is seen to be from Islamist militants from the North Caucasus. Chechen rebel leader Doku Umarov has encouraged such speculation by encouraging his forces to focus on attacking Sochi.

Given the extraordinary security measures in place, Sochi may itself prove to be safe during the Olympics.  However, as the suicide bombings in Volgograd last October and December underline, the threat of terrorism remain clear and present in Russia, and another city (or cities) could be targeted in forthcoming days.

For all of these reasons, it is unlikely that the Sochi Games will provide Russia's reputation with a major international "bounce". The fortunes of "Brand Russia" have been on the wane in many international surveys in recent years, and this seems unlikely to change significantly in 2014.

Election ambitions
While international indifference to Sochi may prove embarrassing for Putin, it will not mean his abject failure with this highly personal project. On the contrary, should the Olympics prove a success, it could prove a key moment in his attempts to consolidate domestic support in Russia. Putin is acutely aware that his potential re-election in 2018, should he choose to stand again, is not necessarily the foregone conclusion it was in previous ballots.

In this context, holding an Olympics that is well regarded within Russia itself could prove a pivotal point in a long re-election campaign that could see Putin remain in power until 2024.  If this were to happen, he would have achieved the truly remarkable feat of being prime minister or president for more than two decades, a longer period at the top of the political system than all the former Soviet Union’s supreme leaders, except Joseph Stalin.

Andrew Hammond was formerly a geopolitics analyst at Oxford Analytica and a special adviser in the Tony Blair government.