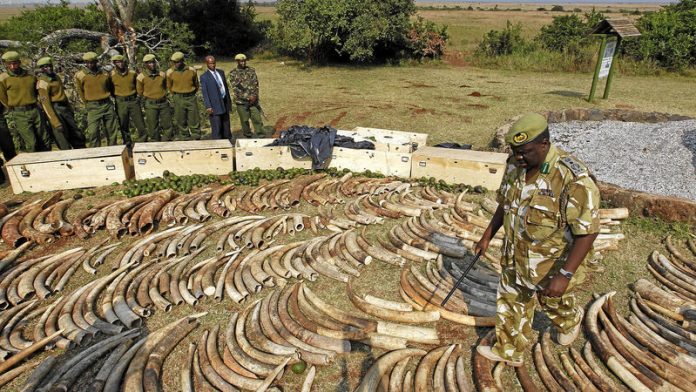 A Chinese suspected ivory smuggler has been arrested in Kenya and extradited – the first time that China has helped arrested a wildlife crime suspect overseas, according to the country's official news agency Xinhua.

Kenyan authorities arrested the man, surnamed Xue, in Nairobi on January 17, Xinhua reported. He was extradited the next day.

China's burgeoning middle class is considered a driving force behind the international trade in wildlife contraband, estimated to be worth £11.6-billion per year. The country accounts for 70% of global demand for ivory.

Yet Chinese authorities are showing signs of taking the problem seriously. Last month, authorities in the southern city Guangzhou crushed more than six tonnes of confiscated ivory. China recently confirmed it would send a delegation to a major international conference on the trade in London on Thursday.

Xinhua reported that the Nairobi bust was part of a month-long, international anti-wildlife trafficking operation codenamed Cobra II, which involved 28 countries and ended late last month. China "put more than 100 000 staff on the operation, and uncovered over 200 cases involving more than 250 suspects", the newswire said.

Suspects
Two other suspects – Xue's girlfriend, a woman surnamed Li, and a man surnamed Zheng – were detained while trying to enter China in the days following Xue's arrest, Xinhua reported.

"China currently is making around two ivory seizures a day on average, and these tend to be people just carrying rather small amounts into the country," said Richard Thomas, a spokesperson for the wildlife trade-monitoring organisation Traffic International. "What's really interesting and significant about this report is that there appears to be a definite move to go after those who are orchestrating these movements."

He added: "I think this is such a massive issue, and clearly the markets in China are so vast, that it's going to take an awful lot of work. But this is a positive development, and it shows that they're backing up their rhetoric."

Zheng was allegedly caught smuggling ivory at an airport in north-east China in November 2013. Customs staff said they stopped him after an X-ray scanner showed that his suitcase was densely packed with spherical bags. Zheng told the inspectors that the bags contained nuts – gifts for his children – and opened one to prove his point; yet inspectors said some bags buried deep in the suitcase were significantly heavier and contained more than 1 200 ivory beads, weighing 8.77kg.

Zheng was detained, and ultimately led police to Xue, the group's suspected ringleader, in Nairobi.

Chinese authorities allege that Xue and Zheng paid people between £500 and £1 000 per trip to smuggle ivory contraband into China. "China's general customs administration and the ministry of public security sent a team to Kenya to work with local police to capture Xue," said the report. "Though suspects have been arrested, the case is still under investigation." – guardian.co.uk © Guardian News and Media 2014

Our oceans provide us with oxygen, food, recreation, transport and energy; humans should return the favour
Read more
Advertising
Continue to the category
Coronavirus