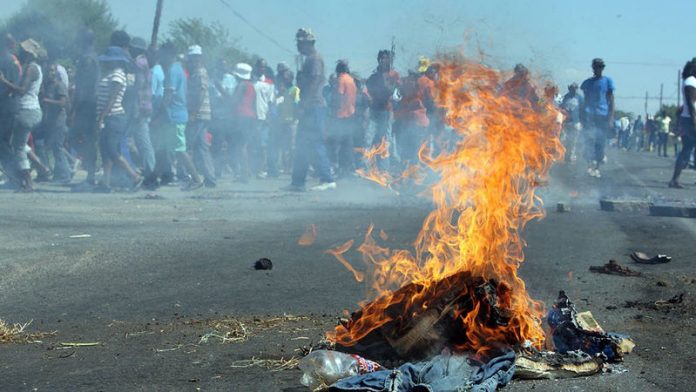 There's been a sharp rise in the number of people killed in service delivery protests, according to research conducted by the Social Change Research Unit of the University of Johannesburg.​

A total of 43 protesters were reportedly killed by police between 2004 and 2014, said researcher Carin Runciman on Wednesday at a presentation of the research findings. This does not include the 37 miners killed during the strike at Marikana in 2012 but does include seven people that have been killed this year alone.

The unit has been compiling a database of community protests since 2004 from media reports and other sources, including the South African Local Government Association.

The number of service delivery protests annually in South Africa has been increasing since 2004 and, since 2009, more of them have turned violent, said Runciman.

But these statistics do not tell the whole story, said another researcher Trevor Ngwane.

The unit also conducted 250 interviews around the country to find out more about the communities that take to the streets.

Exhausted
Most community protests are peaceful, Ngwane said. When protests get disruptive it often means that peaceful means, such as imbizos, local councils, and even the president's hotline and the public protector, have been exhausted.

"Often when people start hitting the streets they should have a banner saying 'all protocol observed'," said Ngwane.

"Such characterisations of these protests serve to de-legitimate the grievances and agency of ordinary working-class people," Runciman wrote in a research paper.

Although some protests may be linked to political factionalism, the people are not stupid and are not duped into participating, said Runciman.

There also appears to be no clear relationship between elections and protests, said Runciman. Community protests leapt from 162 in 2008 to 314 in 2009 — although most of the protests happened after the April elections.

This could be explained by people feeling that they now had "their man" (Jacob Zuma) in office, therefore they wanted to press their demands, she said.

High unemployment levels
From the interviews, the researchers found that anger and frustration lie at the heart of these protests. The high level of unemployment among young people is a big factor.

Unlike workers who can go on strike, these people have very few choices about how to express their grievances, said Ngwane. The levels of frustration can be so high that they are willing to lose something for their cause.

The number of protests since the beginning of this year is not exceptional, but the number of killings of protesters is significant, said Professor Peter Alexander, the research chair in social change at UJ.

Authorities need to change the way they interact with communities and listen to them sympathetically, not bureaucratically, he said.

"Repression is not the answer. It merely intensifies people's bitterness and alienation."

The rising levels of protests are a warning that the problems of poor people need to be addressed. "There is a ticking time bomb in South Africa," he said.