Capturing the ‘extraordinary spirit’ of Madiba 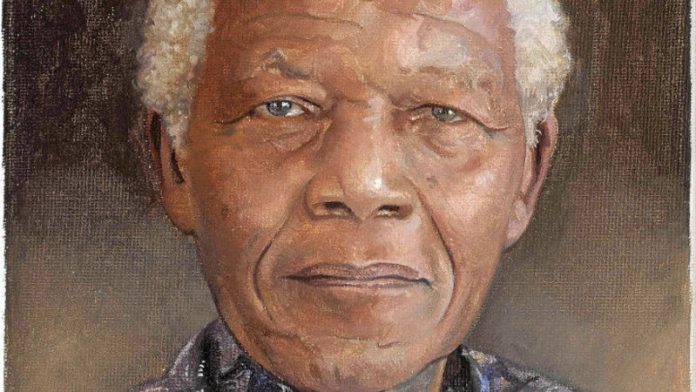 As Nelson Mandela is cherished and remembered with ever more grandiose statues better suited to the sensibilities of North Korean politics than his leadership style of aristocratic persuasion, a far more humane and appropriate portrait of democratic South Africa's founding father is about to be auctioned off to raise funds for Cida University.

The oil portrait is a study of Mandela by renowned artist Richard Stone, who has painted numerous notable portraits of the rich and famous — divas, politicians, titans of industry, and many royals. His full-body portrait of Queen Elizabeth II was unveiled at the National Portrait Gallery, London, in 1992.

Mandela's long life spanned a period when photography in the hands of legions of mediocre artists commissioned by time-pressed subjects largely destroyed the art of portraiture.

For capturing likeness accurately, "photographs are very useful," says Stone, but sitting with the subject and getting to know them is his preferred and the most rewarding method.

His six sittings with Mandela took place in 2008 and the finished portrait was auctioned on Madiba's 90th birthday in London. The life-size canvas portrait sold for £500 000 and currently hangs in New York.

But it is the study, completed within the first three days of meeting Mandela and painted a metre away from his person, that is to be auctioned on February 25 in Cape Town by South African auction house Stephan Welz and Co.

"It had been a long-held ambition of mine to paint a portrait of him," says Stone. He was among many clamouring for the opportunity.

"The agreement was that I was not going to be paid … I would have paid to do it!" Stone laughs.

"The challenge was not only to capture a good likeness, but also to fulfil a public expectation to record something of his extraordinary spirit. It was not easy," says Stone.

"When the public view a painting of someone famous by an artist it often does not match the image in mind."

Indeed, one famous example was Graham Sutherland's portrait of Winston Churchill, which was met with gasps when unveiled. Churchill, without missing a beat, turned the situation to great cheer by declaring: "The portrait is a remarkable example of modern art." Lady Churchill promptly had it incinerated.

"The burden on the artist is thus incredible," says Stone. "I have to present not only a likeness of a man, but the spirit of the man. If anything the spirit of Nelson Mandela is greater than the sum of any portrait."

But Mandela characteristically smoothed the way. He didn't merely sit for Stone, but also played host to him, arranging for his driver to take the artist to Soweto.

"He wanted me to get a feel for the country, to really understand South Africa," says Stone.

"We talked of the people we had in common, and especially our mutual friendship with Archbishop Tutu [whom Stone painted]." Stone was also completing a new portrait of Margaret Thatcher and Mandela asked him to convey his best wishes to the former British prime minister.

"Artists do not [normally] share their studies," says Stone. "In normal circumstances I would not reveal something like this; it is part of my private thinking as an artist. It shows my thoughts drawn and painted at the very moment Mr Mandela was sitting in front of me."

"Ideas often get diluted in the process of picture building where the subject is not sitting in front of you. The study … shows the extraordinary bond with a subject and it's an intense situation as there are no other distractions. And I was there just to focus on Mr Mandela. With someone as famous [as him], the idea is intimidating because people will have their own ideas of his life."

Stone has produced a lively portrait that captures not only Madiba's dignity but also that twinkle in the eye familiar to all of us who met him.