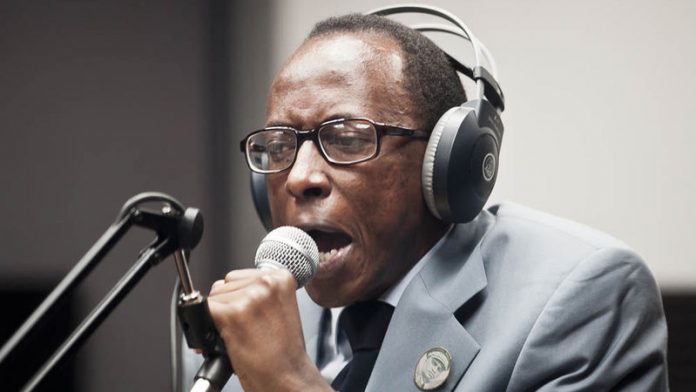 "We have art in order not to die of the truth," Friedrich Nietzsche once said. The theatre piece Hate Radio, which opened at the Wits Theatre last week is probably the kind of art Nietzsche? was envisioning at the time.

Recreated from 1 200 pages of radio broadcast transcripts from Rwanda's Radio-Television Libre des Mille Collines (RTLM), the piece presents a radio broadcast, littered with conspiratory propaganda and despicable racism in the build up to the Genocide in 1994.

It is a ruthless emotional assault, full of harrowing tales of survivors and the human face of hatred.

The reality of the Rwandan genocide in all its brutality is pure horror in Hate Radio; the only thing that saves the audience from completely coming apart at the seams is the knowledge that what you are watching is art.

That almost 20 years separates you as an audience member and the horrific days of the genocide being portrayed on stage.

Jens Dietrich, who is credited as dramaturgy and conceptual management for Hate Radio, says co-conspirator Milo Rau first suggested the idea of the RTLM radio station in a bar in Romania.

"It's like a lens to focus on a theme, and the theme here is racism, and how entertaining racism can be and how dangerous this kind of entertainment is."

"We want to show that new racism, that is a problem in Europe, uses this strategy of entertaining people, by making fun."

Dietrich explains that RTLM was a youth radio station; that the presenters were smoking pot in the studio, making jokes, playing a mix of western pop and rock music and Congolese zouk.

"Even the Tutsi's were laughing at the jokes on RTLM," he says.

Diogene Ntarindwa plays the RTLM presenter Kantano Habimana, but in 1994 he was a 17-year-old fighting in the Tutsi rebel army the Front Patriotique Rwandais, marching on Kigali. "He had a great sense of humour and this was his greatest weapon, says Ntarindwa of his character.

"I was in Rwanda as a young soldier and we were aware of the station and their propaganda," he said. "We were in the field listening to their jokes and the most popular figure was my character Kantano."

"Often someone would say, 'put on the radio, lets have some jokes from Kantano', even though he was the enemy."

"More than once we found ourselves laughing," says Ntarindwa, a comment that is hard to fathom after having seen a Hate Radio performance.

"We were not among the people fleeing or being killed, we were fighting against the government, the genocide was another context to us," Ntarindwa explains.

Calls for 'total extermination'
At RTLM, Habimana was joined by Italian-Belgian Georges Ruggiu and the then Rwandan government propagandist Valerie Bemeriki.

The scene in the studio in Hate Radio is a condensed highlights reel, or horror reel, of the RTLM propaganda at work.

As the presenters celebrate the work of the Interahamwe death squads and hand out information that resulted in what some speculate could be as many as 50 000 murders, in a humorous yet hate-filled manner, it's hard to stomach.

Songs are played with lyrics like "I hate Tutsis, our future is that they are few", while Nirvana's Rape Me is reappropriated to disturbing effect.

Calls for "total extermination" are made with a laugh and smile.

Then there are the interspersed tales of survivors of this hatred.

Contempt spills
Cut to a young girl scarred by the picture of her mother lying naked, murdered in front on her along with her sisters and brothers or the young boy who had to play dead in order to survive a mass killing in a school after being abandoned by the United Nations peacekeepers.

He would eventually sneak away from under a pile of bodies so thick, that it was a struggle to get loose.

"I can feel the bodies," one audience member said after the show.

"You know we didn't give the genocide much thought in South Africa in 1994, we were going through our own thing."

But South Africa in 2014 is a country where contempt spills out onto the streets in the form of violence with alarming regularity, where hatred is still sung in song, where women and children are routinely abused.

South Africa is a country where homophobia is on the rise, xenophobic violence is never far from view, where racism rears its head on the sports field, on the shop floor, in the boardroom and in the comments sections of most mainstream media websites.

Slaughter and mutilation
We should be paying attention to art like Hate Radio more than ever.

The Rwandan genocide acts like a prism for every human to see the absolute worst of humanity.

For in the slaughter and mutilation of the Tutsi's in Rwanda, lies the face of hatred, the face of persecution and oppression.

Whether a war on a people is due to race, class, gender, religion or sexual orientation, we can all see these persecutions there in this historical recreation.

And I guess that's the point, we have art in order not to die of the truth.