They work just as hard at being stylish as they do at transporting Uganda's masses cheaply and efficiently. According to some local reports, there could be as many as 800 000 bodaboda (motorbike taxi drivers) in the country's capital Kampala alone.

On the streets, it's all about being sharply dressed or, in their own words, "being smart". Thanks to Uganda's booming matumba ("used things") industry, these guys are certainly that – must-have wardrobe items include huge sunglasses, statement gloves and funky shirts, many of them from high-end designers (although many of the drivers don't know this).

It's not uncommon to see drivers zooming around town sporting aviator shades, sans helmet, although a nongovernmental road safety organisation, the Uganda Helmet Vaccine Initiative, is working hard to reverse this.

"The boda style, it's brilliant," says Ugandan designer GloRia WavaMunno. "I love seeing how they put their clothes together and have fun with it."

'Border to border' transportation
The country's motorbike couriers, indisputably more hip than their Rwandan and Tanzanian counterparts, emerged from the eastern district of Busia in the 1960s and 1970s. People and merchandise would be transported across the border to Kenya on bicycles, their owners shouting "bodaboda" ("border to border" in Swahili) to customers. The bicycles – people later upgraded to motorbikes – reached most of Uganda's major towns by the 1980s, according to the country's New Vision newspaper.

In the same decade Uganda began to embrace second-hand clothes imports, which is today a multibillion-rand industry. According to the United States International Trade Commission, about 1 442 tonnes of used clothing worth R14.3-million was shipped from the US alone to Uganda between January and October 2012. More comes from the United Kingdom, Australia and other countries.

Although Ugandan designers argue that the imports threaten the local industry, they concede that, if it wasn't for this sector, Ugandans, including the ubiquitous bodaboda drivers, wouldn't have access to affordable clothes.

Although Uganda's 2009 National Textiles Policy proposes phasing out the importation of second-hand clothes by 2015, this is unlikely to happen. And the bodaboda drivers are also not going away anytime soon. The country, therefore, will remain a fashion hot spot well into the future.

Boda style
George Manda (25) usually only buys about two shirts a year and picked up his prized Dolce & Gabbana floral number from a Kampala roadside "boutique" after bargaining it down to 25 000 shillings (about R112), the equivalent of a day's wages.

"I like the colours," says Manda, who owns at least seven shirts. "I like being smart. I like it when people praise me. If I'm smart then I get more business."

As a former barber, Henry Muwonge (25) knows about the importance of looking good. Having turned to bodaboda driving four years ago to make more money, he boasts he's the best-dressed driver out of the 18 riders at his "stage", where boda-bodas wait for customers. 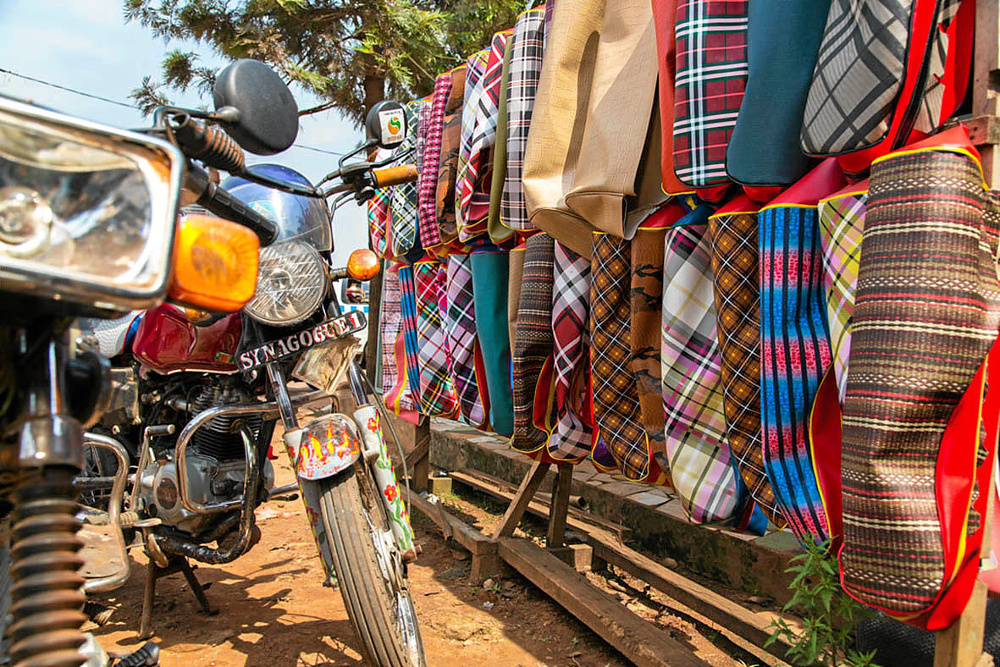 He bought his gold hat at a Kampala shopping mall and the rest of his outfit for 30 000 shillings. "I go shopping normally every few months on the weekends," he says. "I'd like to go every weekend but I have [a] shortage of income."

He may spend his days navigating dusty, pot-holed roads, but Ismail Ssemanda (29) isn't afraid to wear his only suit most of the working week.

"I like to be smart so much," the conservative, married father-of-three says. He bought his suit in "town" for 120 000 shillings more than a year ago.

"When you're smart you look nice for customers. If I'm smart, people come to my stage and say: ‘Take me here, take me there'."

He was previously a private taxi driver and has been a bodaboda driver for only two months. He also has three shirts and two pairs of trousers in his wardrobe.

"When you work in any job you have to be smart, [and] respect the job," Ssemanda says.

"Some ladies don't believe I'm a woman riding a boda when they stop me," Awero says. "Many women fear riding bodas."

She is supported by Tugende, a for-profit organisation that provides loans to recommended drivers to buy bikes on hire-purchase.

Her most frequently worn clothes are cowboy boots and a white shirt, which means she's forever doing washing. "Every afternoon I have to go home and wash it because you get so dirty driving bodas," she says.

When at home with her two sons Naume wears dresses and skirts.

Brian Rubega (22) bought his Hard Rock Café shirt at Owino, Uganda's biggest market and one of Africa's largest, for 5 000 shillings.

"That word Dubai, we know it as a business place," says Rubega, who has never been outside Uganda. "People go there and buy clothes from there. When they tell you about Dubai you feel like you wanna go."

In the past, Rubega, who has been driving bodabodas part-time and washing them for the rest of the time for a year, has bought Nike trainers at Owino for 30 000 shillings. And, unlike other riders, he says you can be safety-conscious and still cool. "If you're wearing a helmet then you're obviously smart and customers would prefer you too because then they know you're serious," he says.

In his leather cowboy hat, which he bought at a Kampala arcade for 30 000 shillings, Topher Katongole (27) hopes he looks like his favourite singers – Jamaican reggae artist Beenie Man and Ugandan performer Bobi Wine."I want to look like the celebrities because I want to get another job and become rich. But this job gives me some money in the meantime," he says.

His preferred outfit is a suit. "I like to look like a gentleman," says Katongole, who has just spent 5 000 shillings on a new, bold red tie. " [And] I like being in a job where I can wear different clothes."