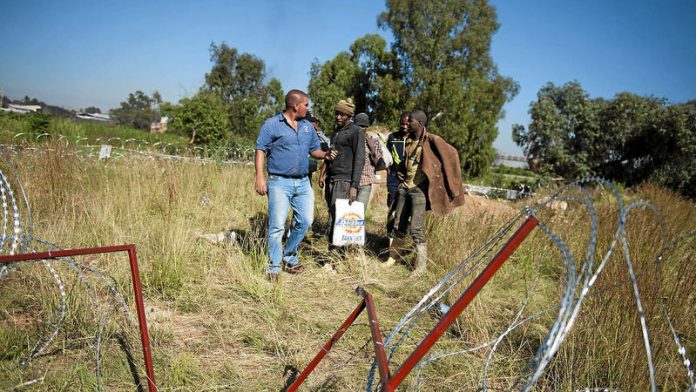 It's a human rights landmine: a standoff between armed illegal miners, many of them foreign, trapped underground in disused mine shafts but too scared to surface and face arrest; police patrolling above, eager to clamp down on the offenders; and a gold mining company that wants to save face and promises to seal the entrance in two weeks' time, regardless of who may or may not be below.

At around 3pm on Monday, officials made their way behind two layers of fierce barbed wire guarding a small, concreted hole in a grubby vacant field in Benoni.

They threw sheets of typed paper down the hole, following the trail of a steel chain ladder into the darkness below.

The papers contained a message translated into English, Afrikaans, isi Xhosa, a mixture of Northern and Southern Sotho, and Setswana.

"This notice is to inform anyone that may be utilising this holing to proceed underground that your conduct is illegal and that you must leave the underground workings immediately. Anyone found … carrying on illegal mining activities underground will be arrested. THIS HOLING WILL BE SEALED ON MONDAY 3 MARCH 2014," it said.

The notice was issued by New Kleinfontein Goldmine, the owners of the mine shaft. Its ultimatum was clear: illegal miners had two weeks to get out or be sealed in, at least at this exit.

Illegal miners rescued
Over the previous two days, more than 20 illegal miners at the abandoned GoldOne shaft on Johannesburg's East Rand surfaced and were rescued.

The operation came about after a pedestrian passing through the field heard shouts for help and alerted the authorities.

Upon surfacing, each miner has been checked for health and then immediately bundled into a police van and driven to a nearby holding cell.

The remaining miners wised up. They were ostensibly trapped, but refused to surface because they faced certain arrest.

"The rescue has been suspended due to the miners not wanting to come to the surface," Russel Meiring, spokesperson for emergency response organisation ER24, told the Mail & Guardian. "We have provided a ladder for the miners to get out."

Food supplies were sent down the shaft on Saturday. But it was unknown whether food was running low, how long the miners had been there, or how many miners remained trapped underground, with some estimates varying between 10 people and the rescued miners' claims of about 200.

Sealing the hole
The notice states in no uncertain terms, however, that the now-guarded hole will be sealed in two weeks time.

"We get concrete trucks and pour concrete down the hole and then cover it with rubble," he said.

It would be impossible for the company to determine whether there are any miners still underground in two weeks' time. A maze of underground tunnels exist, and about 200 illegal miners are estimated to be spread out across the greater East Rand area.

Miners often go underground for weeks at a time and emergency personnel have ruled out going down themselves because of the risk involved.

If checking whether all miners have vacated the shaft before sealing it is out of the question, is GoldOne's decision to block up the entrance permissible by law?

Definitely illegal
"It definitely can't be legal," said Nomzamo Zondo, an attorney for the Socio-Economic Rights Institute of South Africa. "If they can already foresee that people will be underground, it actually becomes criminal."

A second lawyer echoed her words. "It can't be legal to close an entrance that will effectively force people to stay underground," said the attorney, who asked not to be named. "My gut feel and my opinion is no."

But if the miners had other options for escape, it would change the legal implications, said Zondo.

And, according to GoldOne management, the miners will have access to alternate exits.

"There are over 300 shafts and goodness knows how many additional hundreds of holings," said Stuart.

"We have proof that miners could easily exit at some other point. The miners themselves have told us that they have [alternatives]."

Underground tunnels interconnected
But an emergency services representative from the area refuted this.

"It is true that the tunnels underground are all interconnected," he said. "But over the years the water level has risen. This prevents them from getting to other exits."

Fierce turf wars that are allegedly waged between opposing mining gangs are also said to keep miners away from other thoroughfares and openings.

"If another group finds you underground they make you work for them at gunpoint, like a slave. So we go underground armed," one illegal miner told the BBC.

He spoke at the opening of another illegal mine about 2km from the Kleinfontein site.

Two dead bodies were found there on Wednesday morning, believed to have been fatally wounded by falling rocks in an unrelated incident.

Facing a moral dilemma
According to Stuart, one of the last three miners to emerge at Kleinfontein by Wednesday afternoon said he had decided to surface "because he had seen the notice".

He came up at least three days after getting stuck and more than 24 hours after most of the others.

It begs the question of why he would have surfaced at the guarded site if he did indeed have other exits available to him.

"First and foremost we have the responsibility to ensure there's no further harm to human life. People passing through the field — mountain bikers, curious children — could fall in. It is our responsibility to make sure the hole is closed."

But, said Stuart, the company would not have taken the decision if it was the only exit available to miners.

Previously mined land
"We'd have a very serious moral issue doing that. We'd rather post security at the hole for eternity instead."

Previously mined land is often deemed unusable for other commercial ventures such as development for residences, because of instability caused by the under-mining.

Mine houses retain the land as assets or sell them to smaller mining groups that hope to find new, untapped deposits on the premises.

GoldOne said it had counted almost 200 holings when it had acquired the prospecting rights for the land in Benoni.

"We're closing them on a weekly basis," said Stuart. But "rabbit holes" carving new passages to the existing tunnels kept on popping up.

"Of course it's going to happen: the people are poor, they are desperate," said a policeman waiting outside the barbed wire.

The offenders are most often from Lesotho or Zimbabwe, he said: marginalised, often illegal immigrants on the fringes of society.

"But you can never say doing something illegal is all right."