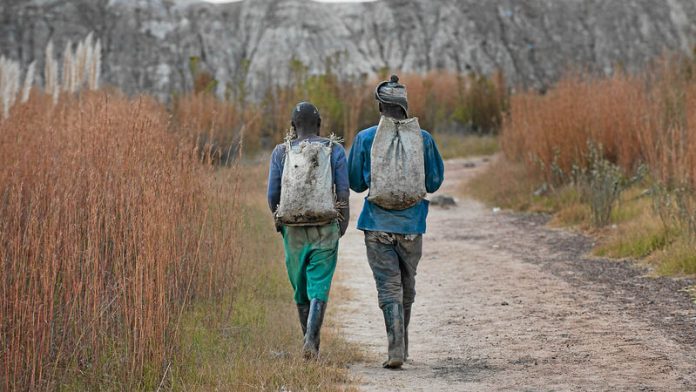 A major tragedy is looming in disused mines if government does not take decisive action to curb thriving illegal mining, the National Union of Mineworkers (NUM) said on Saturday.

"We have been urging the ministers of police and mines to improve on their intelligence side," said NUM general secretary Frans Baleni in Johannesburg.

"These [illegal miners] are just troopers, the network is really big. There is going to be a big disaster one day, we will not be talking about the death of nine people."

He said government needed to be proactive and eliminate the top people in these networks.

"The illegal miners smoke and do all sorts of things like burning [processing] the gold underground."

Baleni said it was highly dangerous to have open flames underground because of the presence of methane.

Brazen operations
He said the syndicates have become brazen, well organised and armed.

"They now include a number of players from the region. It's a well-organised syndicate. People like geologists are recruited and they operate in a particular command structure, when one crosses them they give a death sentence.

"They are even threatening women working underground now. Sex underground is very expensive – about R3 000 for a session.

Police cannot go underground because their insurance does not cover them there," said Baleni.

He said some union leaders had received death threats for speaking against the illegal mining syndicates.

The NEC urged mining companies to set aside funds for the rehabilitation and closure of abandoned mine shafts.

This followed the rescue operation to remove illegal miners from the abandoned Gold One mine shaft in Benoni, on the East Rand.

The miners were found when Ekurhuleni metro police on patrol heard screaming from the abandoned mine.

A rival group had thrown boulders down the open mine shaft, trapping them underground, according to paramedics at the time.

The mineral resources department, through the council of geoscience, sealed 130 holes and shafts, and mines operating in the area sealed 51.

Regarding the May 7 elections, Baleni said the NEC reaffirmed its support for the ANC. But he said the ANC should deploy ethical individuals.

Call for integrity
"We are appealing to the ANC to deploy leaders who are people of integrity.

"The ANC must not take support for granted, to an extent that it fails to provide service, he said.

"The ANC must respect South Africans who support it."

The NUM hit out at metalworkers' union Numsa for "attacking and making threats" against trade union federation Cosatu.

"They are suffering from what is called auto-immunity disorder," said Baleni.

He accused the National Union of Metalworkers of South Africa (Numsa) and its allies of working for the benefit of capital.

"A weakened Cosatu will only benefit capital. Numsa has never rolled out a programme of action against employers but now it has a programme to fight against Cosatu," said Baleni. – Sapa