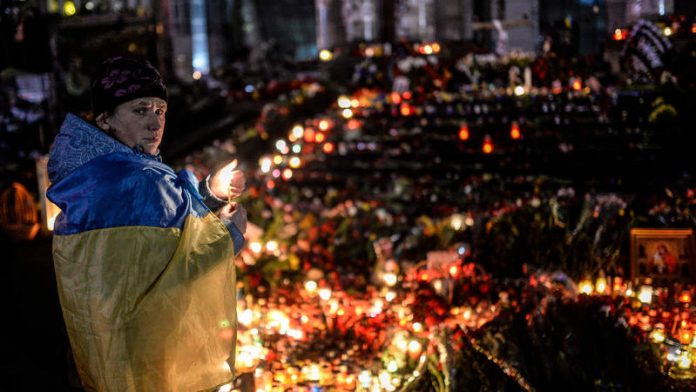 Ousted Ukrainian President Viktor Yanukovich was on the run on Monday, possibly somewhere in southern Ukraine, hunted by police for "mass murder" linked to the revolt against his rule in which scores have been killed.

Yanukovich (63) now accompanied only by his chief aide and a handful of security guards, was known to have been in the pro-Russian Crimea at midnight on Sunday after zig-zagging furtively around eastern Ukraine in a bid to find a safe haven.

But he and his entourage had now driven off to an unknown destination having shut down their communications systems, Ukraine's interim interior minister said, in a move to avoid being tracked. "An official case for the mass murder of peaceful citizens has been opened," the minister, Arsen Avakov, wrote on Facebook.

"Yanukovich and other people responsible for this have been declared wanted."

It was an ignominious political end for Yanukovich who has been publicly deserted by some of his closest erstwhile allies, stripped of his luxury residence outside Kiev and has had to witness the return of his arch-rival Yulia Tymoshenko.

Andriy Klyuev, a minor oligarch who was Yanukovich's head of administration, appeared to be the only person left standing by Yanukovich's side. He was still with his boss, Avakov said.

More than 80 people were shot dead in the capital Kiev last week, most of them anti-government protesters, in a bloody climax to a three-month, largely peaceful, campaign against Yanukovich's policies, known as the "Euro-Maidan".

Dumped now by his closest allies and backers after violence that shocked the world, Yanukovich fled Kiev by helicopter on Friday – the day when the "Euro-maidan" told opposition leaders they rejected a deal they had done with him and demanded he immediately stepped down.

Defiant message
Avakov said he flew to Kharkiv, 500km to the east where he stayed overnight in a state residence and recorded a defiant video message denouncing Ukraine's new leaders as "bandits".

He said he still regarded himself as the country's legitimate president and would try to defend his allies against unjust persecution.

On Saturday he then flew on by helicopter to Donetsk, his political stronghold 300km to the south-east, where he tried to fly out on a private plane, possibly to Russia or other ex-Soviet republics such as Belarus or Azerbaijan.

After border guards denied take-off, he was driven to Crimea, his entourage taking care not to flag his movements with highway police outriders, Avakov said. Once on the Crimean peninsula – where part of Russia's Black Sea fleet is anchored and where the Euro-Maidan movement enjoys little sympathy – he shunned state residences, again to avoid detection.

But having learned later in the day that his official duties had been handed over to one of Tymoshenko's closest aides, he aimed to go to Belbek airport – but changed his mind when he learned Avakov and the new head of state security service were waiting for him.

'In or out?'
Thereafter, he assembled his staff, giving his state-designated bodyguards the option to leave him if they wished. Some did so, taking with them their state-registered weapons to hand over to Crimean authorities, Avakov said.

He later drove off to an unknown destination with his remaining bodyguards and Klyuev. Klyuev (49), a former head of the National Security Council and a former first deputy prime minister, is one of the country's most influential figures, with a highly successful business in electrical equipment which had made him a fortune valued by Forbes at more than $200-million.

He figured prominently in overtures in November to the European Union when Yanukovich was still weighing whether to sign a trade deal with the European Union or plump for financial aid from Russia. Yanukovich in the end chose the latter course, sparking street protests and bloody clashes with police which ultimately led to his ignominious flight across Ukraine.

Many protesters have blamed Klyuev for initial police violence against a group of "Euro-Maidan" students on December 1, which gave a huge surge to a protest movement then in its infancy.

In the past 24 hours, the whole parliamentary faction of Yanukovich's Party of Regions has made a sudden volte-face denouncing Yanukovich for giving "criminal orders" leading to bloodshed.

And Volodymyr Rybak, former speaker and a one-time ally, publicly derided his former boss for spreading false stories alleging he, Rybak, had been beaten and shot at by protesters. These are "absurd inventions", Rybak said. – Reuters