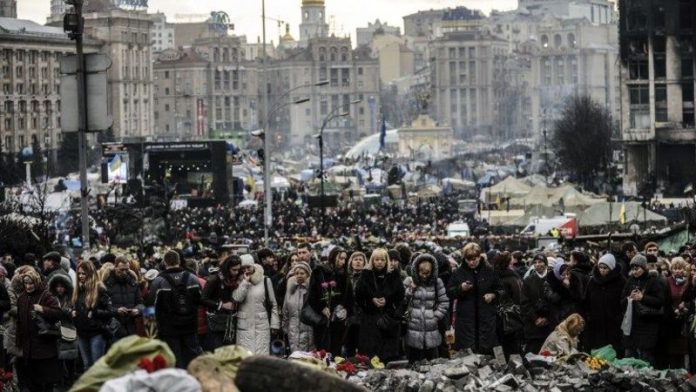 President Vladimir Putin's high alert order for Russian combat troops on Wednesday is the Kremlin's most powerful gesture yet after days of sabre rattling since its ally Viktor Yanukovich was toppled as president in Kiev.

Thousands of ethnic Russians, who form the majority in Ukraine's Crimea region, demonstrated for independence for the peninsula that hosts part of Moscow's Black Sea Fleet.

They scuffled with rival demonstrators, mainly from the Tatar minority, who support the new authorities in Kiev.

With the political turmoil hammering Ukraine's economy, the hryvnia currency tumbled 4% on Wednesday, with ripples spreading to Russia where the rouble fell to five-year lows and bank shares took a hit.

Ukraine's central bank, which has been rapidly spending its hard currency to protect the hryvnia, said it had abandoned a managed exchange rate in favour of a flexible currency.

Moscow denounced what it described as the rise of "nationalist and neo-fascist sentiment" in Ukraine's mainly Ukrainian-speaking western areas, where it said Russian speakers were being deprived of rights.

Safety
It has repeatedly expressed concern for the safety of Russian citizens in Ukraine.

"In accordance with an order from the president of the Russian Federation, forces of the Western Military District were put on alert at 2pm (10am GMT) today [Wednesday]," Interfax news agency quoted Russian Defence Minister Sergei Shoigu as saying, announcing a drill.

The western district borders on Ukraine.

Shoigu also said Russia was "carefully watching what is happening in Crimea" and taking "measures to guarantee the safety of facilities, infrastructure and arsenals of the Black Sea Fleet", in remarks reported by state news agency RIA.

In the latest of a series of increasingly strident statements, Russia's foreign ministry said Ukrainian extremists were "imposing their will", and a Ukrainian church affiliated with the Moscow-based Russian Orthodox Church had faced threats.

Western governments have repeatedly urged Moscow not to intervene.

"We would urge all parties to allow the Ukrainian people to settle their internal differences and then to determine their own future without external interference."

Since Yanukovich's downfall on Saturday, all eyes have been on Putin, who ordered an invasion of neighbouring Georgia in 2008 to protect two self-declared independent regions with many ethnic Russians and others holding Russian passports.

Moscow recognised the regions as independent states, effectively seizing control of the territory from its neighbour.

Any military action in Ukraine, a country of 46-million people that has close ties with European powers and the United States, would be far more serious – the closest the West and Russia have come to outright confrontation since the Cold War.

New Cabinet
Ukraine's new leadership plans to name its new cabinet on Wednesday, paving the way for urgent International Monetary Fund (IMF) talks to stave off financial meltdown now that Russia is all but certain to cut off a $15-billion financial lifeline it offered Yanukovich as the prize for turning his back on ties with the EU in November.

The IMF has said it is prepared to send a team of negotiators to Kiev, but a government must first be formed there and request the aid.

US Deputy Secretary of State William Burns, visiting Kiev, said American financial experts were already in the country looking for ways to help.

Yanukovich fled his luxurious palace on the outskirts of Kiev on Friday night after days of violence in which scores of his countrymen were killed, including demonstrators shot dead by police snipers from rooftops. 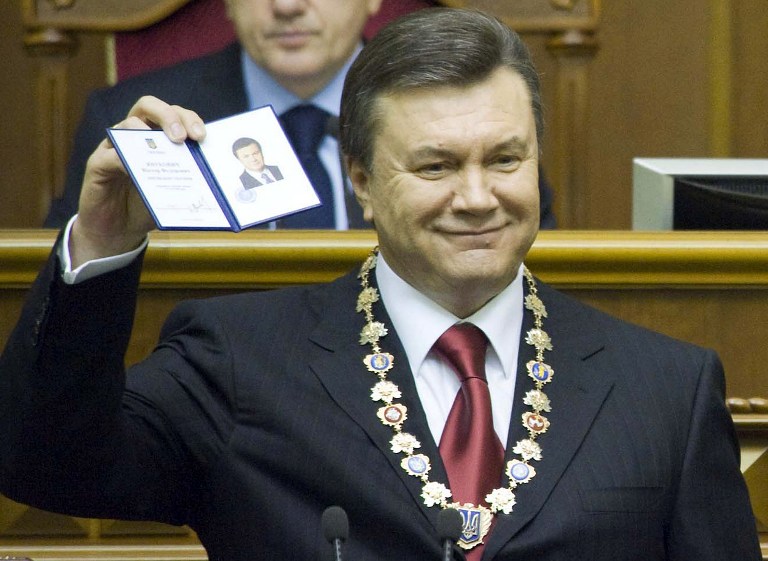 A street leading to Independence Square where many were killed has been renamed "Avenue of the Glory of the Heavenly Hundred" for those slain. It is now covered with heaps of flowers and candles. Pictures of the dead are nailed to trees.

Ukraine has suffered an identity crisis throughout two decades of independence from the Soviet Union.

With borders drawn by Bolshevik commissars, it is split between a largely Ukrainian-speaking west, including areas annexed by the Soviets from Austria and Poland, and eastern provinces where Russian is spoken, mainly Russian territory since the middle ages.

Although most ethnic Ukrainians in the east speak Russian as a first language, the only area where ethnic Russians predominate is the Crimea, which has frequently seen separatist tension at times of mistrust between Moscow and Kiev.

In the regional capital Simferopol, pro-Russian crowds, some of them cossacks in silk and lambswool hats, shouted "Crimea is Russian!" Mainly ethnic Tatar demonstrators backing the new authorities rallied under a pale blue flag shouting "Ukraine! Ukraine!" The regional parliament was due to debate the crisis later on Wednesday.

Crimea was administered as part of Russia within the Soviet Union until 1954 when it was transferred to Ukraine.

However, even in Yanukovich's eastern home region of Donetsk, there was little sign of support for the fugitive leader.

His portrait had been taken down at the Donetsk headquarters of his former ruling Party of the Regions, where its leader in the provincial parliament Nikolay Zagoruyko said Yanukovich was to blame for the killings while he was president.

"Of course he is guilty," he said without hesitation. "He was the president. The guilt for what happened lies with Yanukovich."

Currency dive
The new authorities must salvage the economy of a country near bankruptcy and heavily dependent on Russian gas.

Traders in Kiev said the central bank was absent from the hryvnia market, allowing the currency to fall, passing 10 to the dollar, a fresh record low.

Central bank governor Stepan Kubiv said the bank would not intervene to prop up the currency in coming days.

The hryvnia has lost nearly a fifth of its value since the New Year, more than any other major emerging currency.

The further it falls, the harder for Kiev to repay its dollar debt.

The cost of a contract to insure Ukraine's debt for five years rose to more than 10% per year on Wednesday, meaning traders believe a default is likelier than not.

Oleskander Turchinov, the Parliament speaker who assumed the presidential duties after the assembly removed Yanukovich from power on Saturday, took the helm of the armed forces.

He is expected to pick a cabinet to be announced late on Wednesday to crowds in Independence Square, crucible of the revolt.

Turchinov is an ally of opposition leader Yulia Tymoshenko, who was freed from jail moments before Parliament removed Yanukovich. 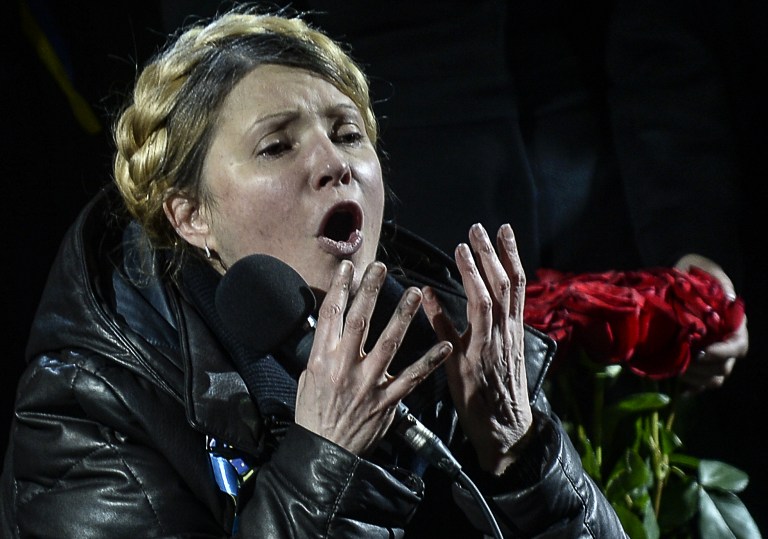 Tymoshenko, a former prime minister, has said she does not want to return to the job, which could go to economist Arseny Yatsenyuk, who ran her party while she was jailed.

Retired heavyweight boxing champion Vitaly Klitschko, who has said he will run for president, may also be given a post.

Yanukovich compound
Ukrainians were shocked by the lavish palace that Yanukovich abandoned, stocked with a private zoo, exotic birds, a floating restaurant built like a pirate ship and a private golf course.

Yanukovich's precise whereabouts are not known, although the government says it believes he is hiding in Crimea.

Parliament has voted to request he be tried at the International Criminal Court in the Hague over the deaths on the square.

On Wednesday the new authorities disbanded the Berkut "Golden Eagle" riot police units blamed by the public for posting sharpshooters on rooftops who killed protesters.

The US treasury warned banks to be on the look-out for potentially suspicious transfers of assets by Yanukovich or members of his circle.

It said on Wednesday it had reduced purchases in February, in part because of a mild winter. – Reuters