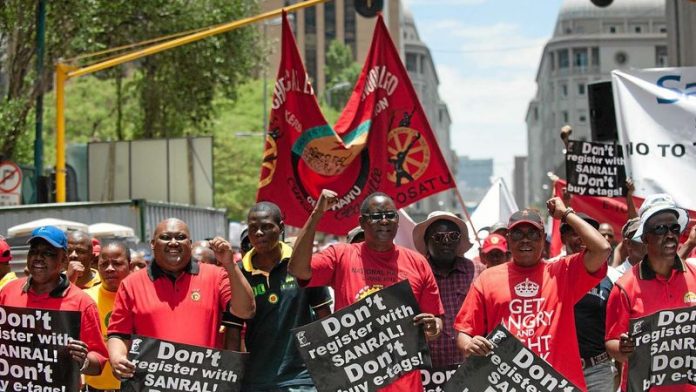 Labour federation Cosatu cautiously welcomed the budget speech despite emphasis on the implementation of the tax incentive or the youth wage subsidy.

In contrast, Cosatu's largest affiliate National Union of Metalworkers of South Africa (Numsa) has reiterated its rejection of the employment tax incentive scheme.

In his budget speech, Finance Minister Pravin Gordhan said the government has started implementing the tax incentive from February and the scheme has already recorded 56 000 beneficiaries. He said the government would go ahead with the establishment of special economic zones, industrial incentives and would support agriculture and labour incentive sectors.

Scores of Numsa members demonstrated outside Parliament earlier on Wednesday to protest against the implementation of the youth wage subsidy. The union has argued that the introduction of the tax incentive scheme would lead to displacement of older and unsubsidised workers and that it would create a multi-tiered labour market where workers in the same establishment and who are doing the same job would have different wages, benefits and overall employment conditions.

However, a Cosatu statement released by its spokesperson Patrick Craven was silent on the controversial tax incentive scheme. Cosatu praised Gordhan's decision to increase the budget despite the constraints the government faced due to the slow domestic and global economic growth.

"We particularly welcome an increase in the infrastructure budget by R847-billion over a period of three years. This will go a long way in catalysing economic growth and job creation," said Craven.

Cosatu's position on the budget this week was a departure from its hostile approach towards the Treasury, particularly Gordhan, whom it previously described as a shopsteward of neo-liberalism in South Africa. Ideological differences within Cosatu have divided the federation down the middle with a group aligned to its president pushing for a softer stance on government, while a group aligned to its suspended general secretary Zwelinzima Vavi wants the federation to remain militant.

Less critical
While Cosatu did raise some concerns in some areas, such as Gordhan's failure to announce steps to implement the legislated minimum wage, road infrastructure and fuel levy, the federation's statement this time around was less critical compared to previous years.

"We congratulate government for its successful removal of one-million invalid beneficiaries from the social grant system and call for stern action to recover money received illegally."

Craven said Cosatu was also happy with the setting up of a tax committee to review the tax system. The federation further welcomed the increased spending in education and health and it repeated its support for the establishment of the Chief Procurement Office to ensure that government gets value for money and to address the problem of government employees who do business with the state.

The federation also welcomed the proposals for the extension of unemployment benefits from 238 to 365 days. Cosatu was disappointed by Gordhan's failure to announce measures within the fiscal policy to implement the ANC resolution on land reform and restitution and the commitment in the State of the Nation Address to move away from the willing-buyer/willing-seller principle to a just and equitable principle.

"We however welcome increased support to the subsistence and smallholder farmers," said Craven.