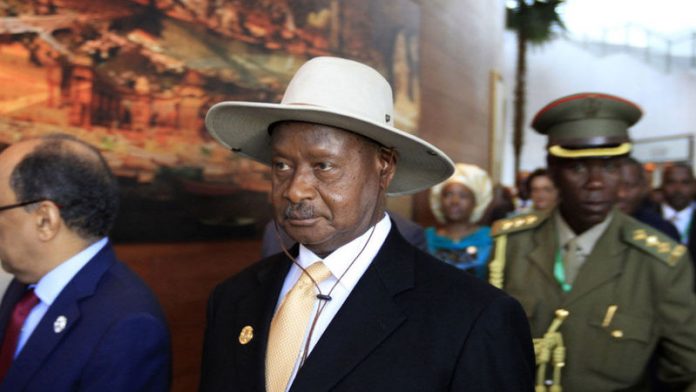 The gains that had made Uganda's shilling the second-best performing African currency this year are evaporating after President Yoweri Museveni imposed harsher penalties against homosexuals.

The shilling slumped 2.5% against the dollar since Museveni signed the bill on Tuesday, the biggest decline among all currencies after Ukraine's hryvnia and Haiti's gourde. That's a reversal of the first seven weeks of the year, when the shilling rallied 3.1%, the most on the continent after the 6.8% surge in Somalia's currency.

The crackdown on homosexuality has caused a backlash against Uganda, a $20-billion economy that exports more coffee than any other African nation. Denmark and Norway have pulled or redirected aid while Sweden said it's reconsidering its program and Virgin Group’s Richard Branson called for a business boycott in an interview with CNN. Standard & Poor's cut Uganda's credit rating one level last month to B, five below investment grade, on concern its budget deficit is swelling and after donors including the World Bank and UK suspended support in 2012 because of corruption.

"Aid inflows definitely matter for the balance of payments in Uganda to a higher extent than in Nigeria and many other African countries," Mark Bohlund, a London-based sub-Saharan Africa economist at IHS Global Insight, said by phone. "The homosexuality bill definitely makes it more difficult to get this suspended budget support reinstated. I was fairly optimistic they would be able to do it in the current fiscal year, but now I think that is out of the question."

Twin deficits
The currency fell 2.1% on Wednesday, the biggest one-day slide since March 2012, to 2 512 per dollar. That was the worst decline among 24 sub-Saharan African currencies monitored by Bloomberg. It traded 0.9% lower at 2 535 per dollar by 10.06am in Kampala.

The shilling's slump may not be related to the signing of the law, but rather the result of other economic issues, Tamale Mirundi, the president's press secretary, said by phone from Kampala, the capital. As for the law, he said, investors and other countries "cannot force us to take what we don’t want."

Uganda, which relies on aid for about 20% of its annual budget, may post a deficit equal to 7.1% of gross domestic product in the fiscal year through June, up from an estimated 4.1% gap the previous year, the International Monetary Fund said in a report dated December 30.

The country's current-account deficit, the broadest measure of foreign trade, may widen to 13.4% of Gross Domestic Product in the fiscal year through June from an estimated 9.9% a year earlier, the IMF said.

Barclays, Woolworths
The deficits will put more pressure on the currency, sending it to an average exchange-rate of 2 680 per dollar this year, Jacques Nel, an economist at NKC Independent Economists in Paarl, South Africa, said by phone on Wednesday. "In the long run, foreign-direct investment could be withdrawn, which will have a bigger impact than the donor aid," Nel said. The law "creates increased risk that companies may no longer invest in the country or invest less," he said.

Lenders including London-based Barclays and Johannesburg-based Standard Bank Group said in response to emailed questions that they are reviewing the legislation. Woolworths, a South African food and clothing retailer, said in an emailed response that its stores in Uganda "remain open to talent of all races, cultures, beliefs and sexual orientation."

"I don’t want to spend money in Uganda," Branson said in an interview with CNN on February 25, without saying whether he has business interests in the country. "I would rather spend money in countries that treat their people decently."

Life sentence
The law, which carries a life prison sentence for some homosexual acts, was enacted after Museveni said scientists in the country found no genetic link to being gay. In Nigeria, where gay sex has been illegal since before independence from the UK in 1960, President Goodluck Jonathan last month signed a law that imposes a 14-year jail sentence for same-sex couples.

Homosexuality is a crime in 38 of 54 sub-Saharan Africa nations, according to Amnesty International.

Stephen Kaboyo, managing director at Kampala-based Alpha Capital Partners, said the outcry over the law won't hurt the Ugandan government's finances or the shilling. "The impact will not be significant because from this year the government has had a strategy of reducing budget support from donors and depending more on domestic revenue mobilisation," Kaboyo said in a telephone interview on Wednesday. "I don't think the shilling will go out of the current trading range."

'Don’t care'
Uganda’s local-currency bonds fells on Wednesday, sending yields on its debt due 2028 up 0.15 percentage point to 15%, according to Standard Chartered data compiled by Bloomberg. The Bank of Uganda sold 70-billion shillings of 15-year notes on Wednesday at a yield of 15.25%, in line with the debut issuance of the securities in December.

Swedish Finance Minister Anders Borg said on a visit to Kampala on February 25 that the country is considering changes to its aid program in Uganda. Denmark announced two days ago it has withdrawn 50-million kroner ($9.2-million) in aid to the government and it's shifting funds to non-governmental organisations. Norway is also halting aid worth 50-million kroner ($8.3-million) over the anti-gay law, Foreign Minister Borge Brende said on Wednesday.

Uganda, classified by the World Bank as one of the world’s poorest nations, last year agreed to refund 38.3-billion shillings to donors. "These African governments don't care if they lose aid, FDI [Foreign Direct Investment] or investments over these laws,” Sebastian Spio-Garbrah, the managing director of New York-based DaMina Advisors, said in an emailed response. "These governments are simply responding to the cultural and religious biases of their electorate."– Bloomberg