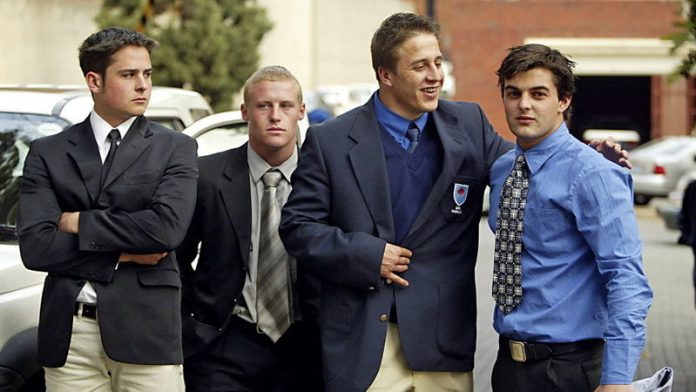 The parole of two of the Waterkloof Four was revoked by the parole board on Friday, the correctional services department said.

The Correctional Supervision and Parole Board decided that Frikkie du Preez and Christoff Becker would only be due for further consideration for parole after spending another year in jail, spokesperson Manelisi Wolela said.

"This confirms the zero tolerance stance of government, and the department … towards ill-discipline among inmates, parolees, and officials," he said.

On February 16, the two were re-arrested after footage of them allegedly drinking alcohol and using a cellphone in jail emerged.

The video, reportedly taken on a cellphone, was posted on YouTube.

It shows Du Preez and Becker allegedly drinking alcohol, and using a cellphone in a jail cell in Pretoria's Kgosi Mampuru prison.

Crime
Earlier this month, Bekker, Du Preez, Gert van Schalkwyk, and Reinach Tiedt were released after being jailed for beating a homeless man to death in Pretoria in 2001.

Wolela said an investigation into the role played by correctional officials in the matter was almost complete.

"This noble profession of corrections has no place for criminals and ill-disciplined officials. The department will root out criminal behaviour among those who taint our standing and reputation in society."

He called on citizens to help expose corruption by contacting the department's anti-corruption hotline. – Sapa