Numsa prepares to launch political party in near future 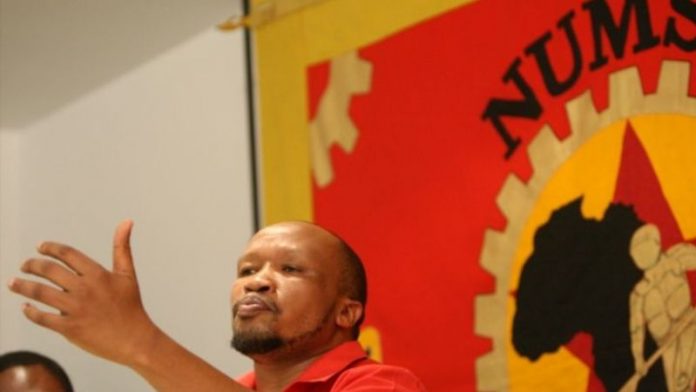 The National Union of Metalworkers of South Africa (Numsa) said on Sunday that it will, in time, launch a political party.

The party, to be called the United Front and Movement for Socialism, would be aimed at uniting the working class and mobilising around issues affecting workers.

Numsa spokesperson Castro Ngobese said the organisation had not yet formed a political party, but would do so at the appropriate time. Contesting the 2014 elections however was off the table.

He said work was underway to mobilise the working class in all its formations, for the radical implementation of the Freedom Charter, the ANC's document of goals and aspirations for the country, and against neoliberalism.

Jim said the leadership of the national liberation movement as a whole had failed to lead a consistent radical democratic process to resolve national, gender, and class questions post-1994 – the year of South Africa's first democratically elected government.

He said the leadership was predominantly drawn from the black and African capitalist class, which "kowtows" to the dictates of white monopoly capitalist and imperialist interests.

"It is half-hearted and extremely inconsistent in the pursuit of a radical democratic programme and has completely abandoned the Freedom Charter," he said.

'Contest the elections'
Jim said it was those circumstances, combined with the worsening situation of the South African working class as a whole post-1994, which has made Numsa rethink and revisit its relationship with the ANC and its alliance.

"We need to organise ourselves as a class, which is why we need a movement that will contest the elections at the appropriate time," said Jim.

In order to reach out far and wide, Numsa would convene provincial and national consultative meetings to share the content of its resolutions on the United Front and Movement for Socialism.

He said during Numsa's January Marxist-Leninist Political School, meetings were held with the leaders of some of the social movements and community structures, to begin the process of mapping out how they could work together.

With more than 340 000 members, Numsa is the biggest trade union in the country.

Abandon capitalism
Earlier on Sunday, Numsa called for capitalism to be abandoned saying it had failed South Africans.

"We at Numsa have no illusion that only a total destruction of capitalism and all it represents, can save the earth and give birth to a new civilisation," Jim told reporters in Johannesburg.

"The South African capitalist state did not emerge as a result of an internal popular anti-feudal revolution."

He said capitalism had depended heavily on imperialist centres.

Jim said 20 years after the democratic transition, the colonial status of the black majority had remained in place.

Out of the 26-million South Africans who live in abject poverty, 25-million were Africans and this was proof enough that capitalism had failed, he said.

"All economic policies since 1994 have been incapable of defeating colonialism of a special type and the effects of apartheid capitalism, which condemned the South African black working class to a life of misery and hardship," said Jim. – Sapa