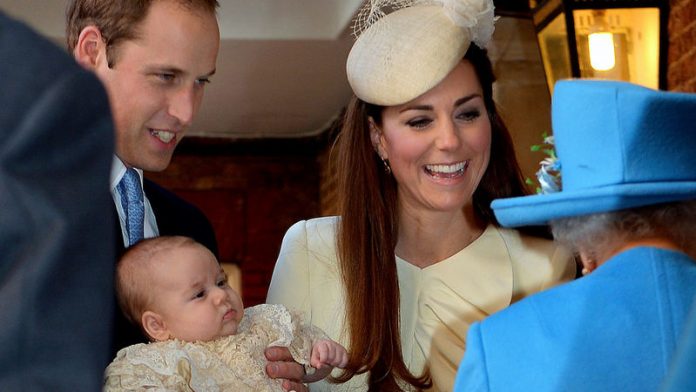 Prince George has, according to his father, a good pair of lungs, and he will be travelling long haul by scheduled flight. So the youngest British royal's first official overseas tour at the tender age of nine months may prove challenging – and not just for his parents, the Duke and Duchess of Cambridge.

Details of the couple's three-week tour of New Zealand and Australia, announced on Sunday, show that they have adopted a "hub and spoke" approach tailored to accommodating travelling with their son.

While George will be based with a nanny in Wellington, Sydney and Canberra, his parents will make a series of day trips, spending just two nights away from him. The tour runs from April 7 to 25, starting in Wellington on New Zealand's North Island and ending in Australia's capital city of Canberra.

George's adventure echoes that of his father, who visited Australia at the same age with the Prince and Princess of Wales 30 years ago, and was a pioneer in this regard. Prince Charles was regularly left at home with the nanny from the age of one while Princess Elizabeth, as the Queen then was, joined her husband in Malta when Prince Philip was stationed with the Royal Navy. And baby Elizabeth did not see her parents for half a year when they undertook an antipodean tour on behalf of George V when she was nine months old.

"Taking a nine-month-old on a royal tour is not a first, but it has not happened in this royal family's context for many, many years, so there has been much to think about – as any new parents travelling long-distance will recognise," said Miguel Head, the duke's private secretary.

Permission granted
The Queen granted permission for the second and third in line to the throne to travel together, as protocol usually dictates separate flights for those in immediate direct line of succession.

The royal party will fly out from and back to London on scheduled flights, with internal flights provided by the royal air forces of the host countries. In addition to security, the party will comprise two private secretaries, three press officers, a tour secretary, a personal assistant, a hairdresser, an orderly and a nanny.

William (31) and Kate (32) decided to take George "because it is a long way to go and a long time – three and a half weeks including travel", said Head.

Quite how much of the prince the public will see – apart from him getting on and off planes – has yet to be decided. It is hoped he will be on show for at least one engagement in each country, including possibly at a coffee morning for new mothers, fathers and their babies at Government House, Wellington, organised by the Plunket organisation, which provides healthcare and support to new parents.

Head said a decision on George's appearances would be taken at the time, but his parents were "content enough to know that he will be with them in both countries for those three weeks".

Sporting events
For the duke and duchess, said to be "very outdoorsy, sporty people", the tour will offer them a chance to race each other around Auckland harbour in state-of-the art Team New Zealand Americas Cup racing yachts and experience an adrenalin-pumping canyon ride in a 50mph Shotover jet in Queenstown.

The sporting theme continues with a visit to a festival of "rippa rugby", a non-contact version of the sport for youngsters, in Dunedin and meeting New Zealand Olympians at a new velodrome in the town of Cambridge.

The couple will meet those affected by the 2011 earthquake in Christchurch, South Island, which claimed 185 lives, and by the recent bushfires that tore through communities in the Blue Mountains outside Sydney, Australia.

There will be the opportunity for them to walk around the base of Uluru, formerly known as Ayers Rock, in Australia's Northern Territory and sample the viniculture in the Otago region of New Zealand.

They will also see the bilby enclosure at Taronga Zoo, Sydney, dedicated to the threatened desert-dwelling marsupial and named after Prince George on his birth in July.

Youthful endeavours
Among engagements focusing on young people, they will drop in to a music studio and watch a skateboarding display in the Elizabeth suburb of Adelaide. The duchess, patron of East Anglia's Children's Hospices, is said to be particularly interested in visiting hospices in both countries.

As is usual on such tours, there will be tree plantings, wreath layings and official receptions, with William giving several short speeches. The couple will pay tribute to armed forces personnel in both countries and take part in Anzac commemorations in Canberra, which mark the sacrifice of Australian and New Zealand soldiers in the Gallipoli campaign during the First World War and in other conflicts since.

It will be the duchess's first visit to either country. During the tour, the couple will have three private days without engagements.

"There is no hiding the enthusiasm for this visit by both the duke and the duchess – the duke because he has been before, and the duchess because she has never been to either country but has wanted to do so as long as she can remember," Head said.

"The duke has no doubt that his wife will fall in love with New Zealand and Australia every bit as much as he did some years ago." – guardian.co.uk © Guardian News and Media 2014

Prince George: Some good news amid the chaos