Ukraine: What will happen now? 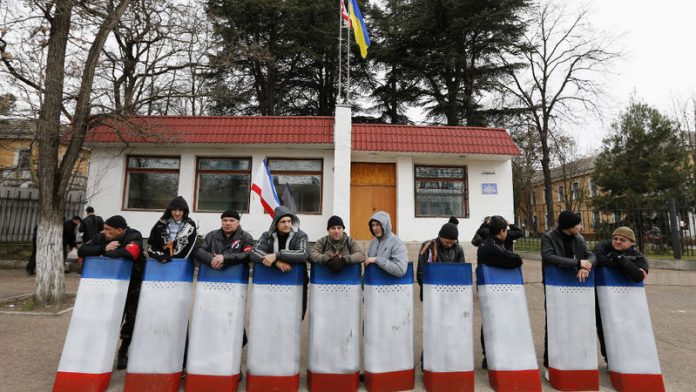 In his 14 years in power after a career as a KGB officer grieving the loss of the Soviet empire, Vladimir Putin has launched three wars against Russia's neighbours and territories formerly under the Kremlin's domination.

As a newly appointed prime minister in 1999, before becoming president on New Year's Day 2000, he launched his career with a war in Chechnya, brutally suppressing an armed insurrection against Moscow's rule in the north Caucasus and razing the provincial capital, Grozny.

In 2008, he ordered a blitzkrieg against Georgia, partitioning the country in five days. He remains in control of 20% of Russia's Black Sea neighbour: the territories of South Ossetia and Abkhazia.

The Russian military also controls a slice of Moldova known as Transnistria in a frozen conflict dating from the collapse of the Soviet Union.

In the Crimea and the Ukraine, however, in the event of full-scale war, Putin has opted for a game-changer with the potential to be Europe's worst security nightmare since the revolutions of 1989 and the bloodiest since Slobodan Miloševi?'s attempts to wrest control of former Yugoslavia resulted in four lost wars, more than 100 000 dead, and spawned seven new countries in the Balkans.

Ukraine is a pivotal country on the European Union's (EU's) eastern and Russia's south-western borders. Territorially it is bigger than France. Its population is greater than Poland or Spain at 46-million. It has fighting forces and is well armed. Ukraine was the Soviet Union's arms-manufacturing base, it remains in the top league of global arms exporters. And although its military is no match for Russia's, its fighting forces will be able to inflict a lot of damage if forced to defend their country.

The Georgia scenario
The most benign outcome is that Putin envisages a Georgia-style incursion, a brief week of creating new facts on the ground, limiting the campaign to taking control of the Crimean peninsula with its majority ethnic Russian population, and then negotiating and dictating terms from a position of strength to the weak and inexperienced new leadership in Kiev.

Putin made no public comments after last weekend's revolution in Kiev that saw the flight of President Viktor Yanukovych to Russia until his Crimea operation, well-planned and activated without a shot being fired, was effectively over.

The military operation was accompanied by political moves – the regional Parliament and political leadership calling for Russian help, declaring loyalty to Moscow, disowning the new administration in Kiev and ordering a referendum on Crimea's status by the end of the month.

If that is the aim, it is virtually mission accomplished. The goals were achieved even before Nato ambassadors could gather in Brussels on Sunday or EU foreign ministers could assemble to ponder their options on Monday.

But there are plenty of signs that controlling or even annexing Crimea may not sate the Russian appetite in Ukraine.

A more ambitious and much more dangerous scenario is also entirely conceivable.

The Yugoslavia scenario
If the Crimean seizure has been easy and bloodless, it is because of the heavy Russian military assets there, the support of much of the local population and because the Ukrainian forces there were caught off-guard by the speed of the takeover, and also because they are under orders not to fight back (yet), for fear of provoking a significant and bloody escalation.

All the signs are that Putin, with his proprietorial approach to large stretches of the former Soviet Union, will refuse to accept the legitimacy of a Ukrainian state that has turned west to secure its future, cutting the umbilical cord that the Kremlin thinks makes it Russia's baby.

The aim, as Ukraine's acting president speculated on Sunday, may be to wreck Ukraine economically; to disable its functioning as a genuinely independent state.

That aim would encourage Putin to expand his influence from Crimea into eastern Ukraine, dismissing Kiev's authority, broadly cutting the country in two, Kiev and the West versus the East and the South.

That raises the prospect of civil war. Already, in the initial skirmishing, the tactics and the methodology that made Serbia's Miloševi? so ascendant in the Yugoslav wars of 1991 to 1995 and Kosovo in 1998/99 (although he lost them all in the end) are evident.

Parallel state structures
There is the establishing and no doubt arming of local loyal militias, the emergence of new pro-Russian leaders handpicked by the Russian security services, the use of quick referendums to lend a "democratic" veneer to pre-ordained decisions taken in Moscow, the funding of loyalist forces, the staging of "provocations" that are then amplified by outrage and the clamour for retaliation in the Kremlin-controlled media, the creation of parallel state structures, say, in Kharkov in the East – Ukraine's second city and its capital during the Russian civil war because it was "red" and Kiev was "white".

There are also the ethnic, confessional and cultural divisions that sunder Ukraine, between the Catholic and nationalist west and the Orthodox and often pro-Russian east, also recalling Yugoslavia.

These, however, are far from insuperable problems. There is nothing inevitable about an east-west clash, given benign and careful political leadership.

But if the state and its propaganda arm and television are resolved to magnify these underlying tensions into a casus belli, it is easily, as Miloševi? proved, accomplished.

If Putin opts to be the new Miloševi?, the west will be staring a new division of Europe in the face.

What can or will the West do?
There appears little appetite in the west for getting seriously embroiled beyond diplomacy. The responses have been slow and after the fact. The Ukrainian turmoil started in November with the Kiev protesters opposing a pro-Russia president to demand a European vocation.

The default EU position in these crises, from Robert Mugabe in Zimbabwe to Alexander Lukashenko next door to Ukraine in Belarus, is to impose sanctions and travel bans on leadership cliques. But there is too much at stake in Ukraine for that to have much impact.

But John Kerry, the US secretary of state, has upped the ante, warning of a sanctions package that would isolate Russia economically.

That is an intriguing suggestion because the Russian economy is entirely dependent on raw materials; on oil and gas exports.

Isolating Russia economically would entail quarantining, for example, the gas sector and the world's largest gas producer Gazprom. But Gazprom is Europe's biggest gas supplier. The US would be barely affected by such sanctions. Europe and Germany would be hammered. All of the Baltic, central and eastern Europe, including Ukraine itself, are utterly dependent on Gazprom, while Germany, Europe's biggest energy consumer, gets more than a third of its gas from Russia.

More likely is also Yugoslav-style western mediation, with "contact groups" of diplomats or UN envoys charged with running negotiations between the warring parties, monitoring ceasefires and dispatching observers under the UN or the Organisation for Security and Co-operation in Europe.

Ukraine will start to sound like Switzerland. There will be lots of talk of new arrangements entailing "federalisation" or "confederalisation", with the Russian aim to maximise its control over much of Ukraine while arguing it recognises its territorial integrity. – © Guardian News and Media 2014