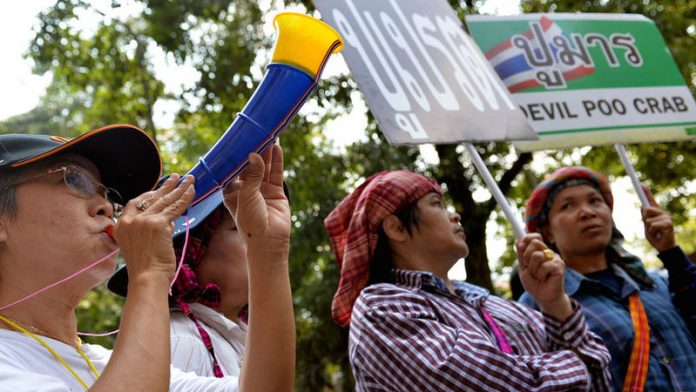 A state of emergency in Bangkok could be extended until anti-government protests end completely, Thailand's foreign minister said on Tuesday, adding that he feared more violence even though the protests had subsided.

Protests aimed at overthrowing Prime Minister Yingluck Shinawatra are in their fifth month, but at the weekend the remaining protesters closed down several big protest sites and moved to a central Bangkok park.

"If [Thai politician] Suthep [?Thaugsuban] continues with his protest and there are more violent incidents, including grenades thrown, shootings and acts of violence by provocateurs, the emergency law will have to stay until the situation improves," Foreign Minister Surapong Tovichakchaikul told reporters.

The protests are led by Suthep Thaugsuban, a former deputy prime minister in a government led by the Democrat Party, now the main opposition party.

"We will wait for security forces, the army and the Cabinet to decide before the emergency expires on March 22," Surapong said.

The government imposed the 60-day emergency in Bangkok on January 21 to prevent an escalation of the protests ahead of a general election on February 2, which nevertheless was disrupted.

The demonstrations are the latest chapter in a conflict that has gripped Thailand for eight years and broadly pits Bangkok's middle class, southern Thais, and the royalist establishment against mostly rural supporters of Yingluck and her brother, ousted former premier Thaksin Shinawatra.

Start of the protests
The protests began in November with attempts to occupy government buildings and spread in January when major roads in the capital were blocked. Those roads reopened on Monday after the protesters withdrew and regrouped in Lumpini Park.

The protesters have lost faith in elections, which parties of the populist Thaksin keep winning, and want to reform the political system to end the influence of the former telecoms tycoon who they accuse of being a corrupt crony capitalist.

Thaksin has lived abroad since 2008 to avoid a jail term for a graft conviction he says was politically motivated.

Labour Minister Chalerm Yoobumrung, who is in charge of enforcing the state of emergency, said the protests were unlikely to end soon and the demonstrators were banking on intervention by courts widely seen as hostile to Yingluck to bring down her government.

"The protests will go on for a while because Suthep has not reached his target … but I don't believe he can reach his goal so demonstrators are waiting for some sort of intervention by independent organisations," Chalerm told reporters.

Ready to mobilise
Yingluck faces several legal challenges, the most immediate threat coming from charges of negligence relating to a disastrous rice subsidy scheme that has run out of funds, prompting unpaid farmers to demonstrate in Bangkok.

She has been given until March 14 by the National Anti-Corruption Commission to defend herself. It will then decide whether there is a case to pursue and, if it goes ahead, she may be forced to step down.

Under emergency rule, public gatherings of more than five people are banned and security forces have the right to detain suspects for more than 30 days without charge, but a court ruling last month limited the state's powers to disperse protesters.

Representatives from business organisations including the Stock Exchange of Thailand and the Tourism Council of Thailand have urged the government to reconsider the emergency law, saying it had affected tourism and other sectors.

The violence is the worst since 2010 when Suthep, at the time a deputy prime minister, sent in troops to end demonstrations by pro-Thaksin "red shirt" activists.

Suthep faces murder charges related to his role in that crackdown, when more than 90 people were killed.

Thaksin's supporters, largely based in the north and north-east, have threatened to defend Yingluck if she is removed from power, adding to fears of civil strife.

'The elite have killed'
Thanawut Wichaidit, a spokesperson for the Red Shirts's United Front for Democracy against Dictatorship, said the group had practised over the weekend how to mobilise people in the north-east to get down to Bangkok.

"We rehearsed how to move large groups from one city to another to warn anti-government forces not to do anything that destroys democracy. The elite have killed red shirts like pigs and dogs in the past and we'll make sure they never do that again," he said. – Reuters