Training for the Absa Cape Epic is no easy ride 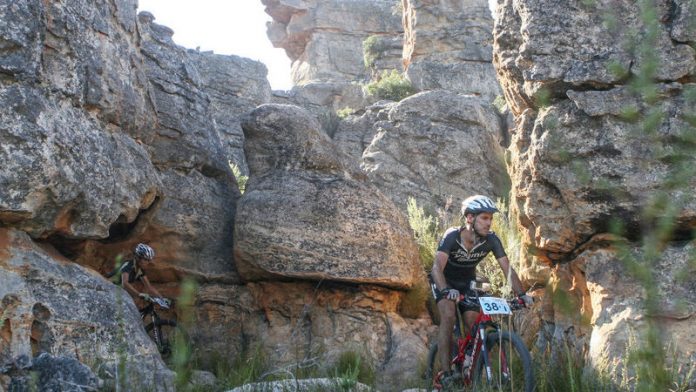 On Saturday morning at 6.30am, a stream of cyclists flowed over Chapman's Peak, including children, geriatrics, people with rusted old bikes, carbon frames worth more than most cars, tandem bikes, a man lying on a recumbent bike pedalling with his arms, a foot-long string of mucus and sweat swinging from the tip of a nose.

A pro-looking rider wore a perfectly matched kit of pink, baby blue, black and white, with black socks that were not too long and not too short, stopping just the bulge of where his shaved calf muscle is supposed to start. He had mirrored eye shades (the glasses' arms pass over, not under, the helmet straps – strict fashion code). His expensive drinks glowed colourfully from his ride bottles.

He was passed by a sweat-drenched, hairy-legged man wearing his helmet backwards who forgot his water bottle at home.

The bikes took up both lanes, swerving, speeding, and stopping without warning. A surfer on the way to the beach leaned on his hooter in frustration and slowly manoeuvred his car through the crowd. On the Hout Bay end of the pass, stop-go roadworks constrained the flow. When the marshals nodded and the light turned green, there was a clatter of steel-cleated shoes on pedals as a few dozen bikers set off up the hill.

A group rode ahead of the wobbling mass, their legs turning at a confident, steady cadence. Most of them used light road bikes with narrow smooth tyres. But the group was led by two very skinny men on mountain bikes. Kookily, they wore matching outfits. Even though their knobbly off-road tyres fought and ground hard against the tar, the roadies in the group could barely keep up with them.

Saturday was a typical scene for February and March in Cape Town.

This coming Sunday about 35 000 people are planning to ride around the peninsula in the Cape Argus Pick n Pay Momentum Cycle Tour. Many of them have not crammed a saddle between their thighs since the 2013 tour. So they dusted off their bikes and sat on their saddles with a collective wince with just six weeks to spare. This was when Saturday mornings on Chappies became a carnival. One Saturday, the road was spotted with a few grizzled die-hards around pairs of mountain bikers, the next Saturday it was a sweating, huffing community.

And the mountain bike duos? They are a typical sight around the country this time of year. A few hundred of them emerge from about November.

They are not training for the Argus, although many will ride it. Their knobbly tyres will buzz in the roadies' ears like an aural rash – an irritating reminder for the latter that they didn't train as hard as planned (mountain bikes are supposed to be slow on tar).

The only reason the skinny pairs are riding over the tarred Chappies pass is that there is not enough rideable dirt trail on the peninsula to suit them. On a Saturday morning they will ride every gravel road and rocky single track that they can find between Signal Hill and Cape Point. The long stretches of blacktop – beautiful though Chappies may be – are just a necessary evil linking the dirt.

The pairs are preparing for the Absa Cape Epic at the end of this month. Teams of two compete in the race. So for eight days and about 700km, the teammates – who will have gotten to know each other a little too well over the preceding months – will nurse and push each other through some of the hardest mountain racing in the world.

The Epic is a gruelling thing to attempt, demanding months of obsession, rigorous training schedules laid out on calendars or spreadsheets for five to six days and 12 to 25 hours a week, depending on ambitions.

Thousands of rands are spent on broken parts, bike services, and attending preceding warm-up races. Beer intake is often, sadly, cut down, coupled with other horrible diet fads. Regular body weighing becomes a normal thing to do because a good power-to-weight ratio is critical.

My Epic partner Rory van Zyl and I are caught up in this obsession. He is at a stage where most of his friends are getting married, and goes by bike to countryside weddings or bachelors' parties.

It was my birthday last Thursday, and instead of lazily waking to a loving embrace, coffee, croissants and text messages from friends like I should have, my alarm beeped long before anyone else awoke, and I reached for my tired lycra and headed out into the dawn.

After this Sunday, most bikes will go back into storage and cars will again be able to drive freely on the city's mountain passes. But for three weeks after that, until the Cape Epic starts on March 23, the pairs will keep on riding as if the Argus had never happened.

Then, for a time, even the pairs will stay home to spend some time with their loved ones, leaving just the grizzled veterans to brave the winter.