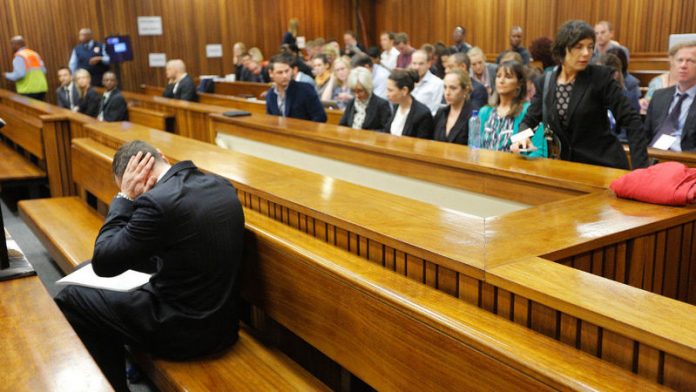 In some cases it takes a little longer, and in others it comes a little sooner. Eventually, though, seemingly in any tribunal, inquest or court, normality starts to reassert itself, as if the spell of formality simply can not hold. Even in forums considering the foulest, most terrible things people can do to one another, there are light-hearted moments, idle chatter, and the course of ordinary life.

In the second court day of Oscar Pistorius's trial for the murder of Reeva Steenkamp, the first signs of such normality showed.

On Monday the tension was palpable, or at least it was so in hindsight once it began to ebb. The security staff was prepared for action, legal teams were sizing one another up, witnesses did not know what to expect, court officials were concerned about the newly introduced cameras, the media were watching every flutter of eyelash and drawing of breath, and friends and family of Pistorius and Steenkamp were rigid and guarded.

On Tuesday, however, the Pistorius family chatted in theirs seats, unmindful of journalists sitting just behind them. Court orderlies and staff joked as they waited between sessions, rather than watching the room in their charge like hawks. Things were running smoothly and attention drifted – as it irresistibly will when over a hundred people are locked in a windowless room.

It spread widely. Pistorius himself, who on Monday displayed all the body language of a block of concrete, was gripping the shoulder of his lawyer Kenny Oldwage before midday the following day and getting a firm press on his own shoulder. Armed police guarding the judge halted their previously ceaseless scanning of rooms and corridors to adjust clothes and inspect pocket lint. Journalists, who on Monday fearfully clung to contested seats in the court room, were cheerfully littering its floor by Tuesday.

With dropped guards came mistakes of carelessness. Broadcaster eNCA, in what it later described as a somewhat thoughtless move, displayed a file photograph of witness Michelle Burger over a live audio feed of her testimony – which brought proceedings to a halt and could result in an investigation into whether it constituted a breach of a court order. Pistorius, enjoined under threat of arrest to attend proceedings, was late to return after the lunch break, leaving an amused judge waiting while defence attorneys scurried to find him.

Both incidents managed to stave off, for a time at least, the steady rhythm to which any trial of significant duration must inevitably succumb.

Aggressive cross-examination
A slight relaxation of atmosphere can also have unexpected consequences, it seemed. Burger, the first witness for the state, stood up remarkably well under hours of sometimes vicious and nitpicking, but always aggressive, cross-examination by defence counsel Barry Roux over two days. Handed back to the sympathetic prosecutor Gerrie Nel for a few brief clarifications, she was reaching for a tissue and wiping away tears within minutes, suddenly (if only slightly and briefly), overcome with the emotion of hearing about the death, or perhaps the aftermath, of Steenkamp.

But in other instances the change in atmosphere brought a softening. In the midst of much discussion about screams, shouts, the relative loudness of gunshots versus a cricket bat hitting a door and lines of sight, it took a moment for most of the court to realise that Roux started to describe how Steenkamp would have been unable to scream after a bullet entered her brain. Pistorius – who in March 2013 sobbed uncontrollably on several occasions during bail proceedings – took several long moments to absorb what was being said before leaning forward and clasping his head. Only later did he seem to be wiping away a few tears.