US duplicity on Ukraine is ‘beyond absurdity’ 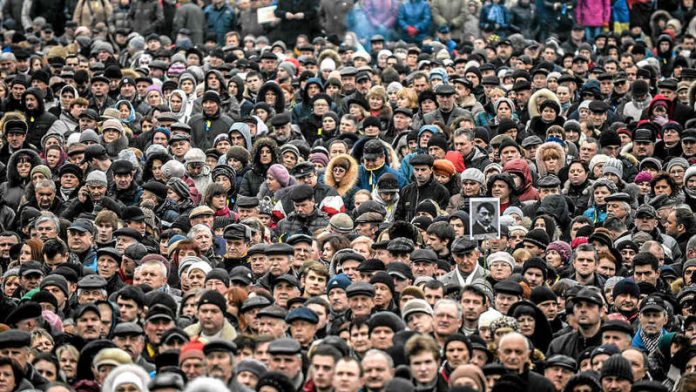 Diplomatic pronouncements are renowned for hypocrisy and double standards.

But Western denunciations of Russian intervention in Crimea have reached new depths of self-parody. The so-far bloodless incursion is an "incredible act of aggression", United States Secretary of State John Kerry declared. In the 21st century you just don't invade countries on a "completely trumped-up pretext", he insisted, as US allies agreed that it had been an unacceptable breach of international law.

That the US, which launched the greatest act of unprovoked aggression in modern history on trumped-up pretexts – against Iraq, the invasion of Afghanistan, bloody regime change in Libya, and the killing of thousands in drone attacks on Pakistan, Yemen and Somalia, all without UN authorisation – should make such claims is beyond absurdity.

It is not just that Western aggression and lawless killing is on another scale entirely from anything Russia appears to have contemplated, let alone carried out – removing any credible basis for the US and its allies to rail against Russian transgressions – but the Western powers have also played a central role in creating the Ukraine crisis in the first place.

The US and European powers openly sponsored the protests to oust the corrupt but elected Viktor Yanukovych government, which were triggered by controversy over an all-or-nothing Europen Union (EU) agreement that would have excluded economic association with Russia. In her notorious "fuck the EU" phone call leaked last month, US official Victoria Nuland was heard laying down the shape of a post-Yanukovych government, which was then turned into reality when he was overthrown after the escalation of violence a few weeks later.

The president had by then lost political authority, but his overnight impeachment was certainly constitutionally dubious. In his place a government of oligarchs, neoliberal Orange Revolution retreads and neofascists has been installed, one of whose first acts was to try to remove the official status of Russian, spoken by a majority in parts of the south and east, as moves were made to ban the communist party, which won 13% of the vote at the last election.

It has been claimed that the role of fascists in the demonstrations has been exaggerated by Russian propaganda to justify Vladimir Putin’s manoeuvres in Crimea. The reality is alarming enough to need no exaggeration. Activists report that the far right made up a third of the protesters, but they were decisive in violent confrontations with the police.

Fascist gangs now patrol the streets. But they are also in Kiev's corridors of power. The far-right Svoboda party, whose leader has denounced the "criminal activities" of "organised Jewry" and was condemned by the European Parliament for its "racist and anti-Semitic views", has five ministerial posts in the new government, including deputy prime minister and prosecutor general. The leader of the more extreme Right Sector, at the heart of the street violence, is now Ukraine's deputy national security chief.

Neo-Nazis in office is a first in post-war Europe. But this is the government now backed by the US and the EU. And in a contemptuous rebuff to the ordinary Ukrainians who protested against corruption and hoped for real change, the new administration has appointed two billionaire oligarchs to be the new governors of the eastern cities of Donetsk and Dnepropetrovsk. Meanwhile, the International Monetary Fund is preparing an austerity plan for the Ukrainian economy, which can only swell poverty and unemployment.

From a longer-term perspective, the crisis in Ukraine is a product of the disastrous Versailles-style break-up of the Soviet Union in the early 1990s. As in Yugoslavia, people who were content to be a national minority in an internal administrative unit of a multinational state – Russians in Soviet Ukraine, South Ossetians in Soviet Georgia – felt very differently when those units became states to which they felt little loyalty.

In the case of Crimea, which was only transferred to Ukraine by Nikita Khrushchev in the 1950s, that is clearly true for the Russian majority. And contrary to undertakings given at the time, the US and its allies have since relentlessly expanded the North Atlantic Treaty Organisation up to Russia's borders, incorporating nine former Warsaw Pact states and three former Soviet republics into what is in effect an anti-Russian military alliance in Europe. The European association agreement that provoked the Ukrainian crisis also included clauses to integrate Ukraine into the EU defence structure.

That Western military expansion was first stopped in 2008 when the US client state of Georgia attacked Russian forces in the contested territory of South Ossetia and was driven out. The short but bloody conflict signalled the end of George Bush's unipolar world, in which the American empire could enforce its will without challenge on every continent.

Given that background, it is hardly surprising that Russia has acted to stop the more strategically sensitive Ukraine from falling decisively into the West camp, especially given that Russia's only major warm-water naval base is in Crimea.

Clearly, Putin's justifications for intervention – "humanitarian" protection for Russians and an appeal by the deposed president – are legally and politically flaky, even if nothing like on the scale of "weapons of mass destruction". Nor does Putin’s conservative nationalism or oligarchic regime have much wider international appeal. But Russia's role as a limited counterweight to unilateral Western power certainly does. If the US, Britain, France and their allies have turned international lawlessness with a moral veneer into a permanent routine, others are bound to try the same game.

Fortunately, the only shots fired by the Russians have been over the heads of the Ukrainians. But the dangers of escalating foreign intervention are obvious. What is needed instead is a negotiated settlement for Ukraine, including a broad-based government in Kiev shorn of fascists; a federal Constitution that guarantees regional autonomy; economic aid that doesn’t pauperise the majority; and a chance for people in Crimea to choose their own future. Anything else risks spreading the conflict. – © Guardian News & Media 2014