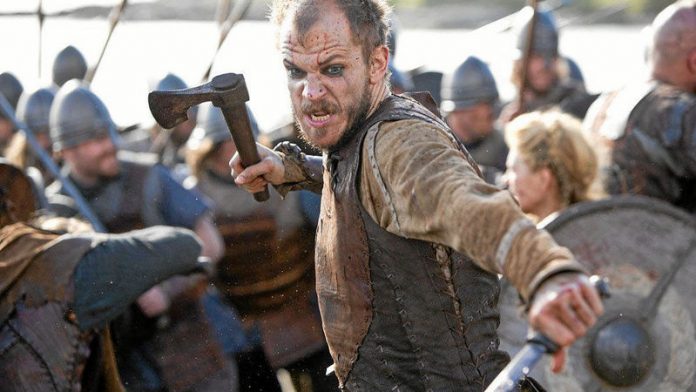 If there's one recurring theme in Vikings, the History Channel's latest foray into scripted television, it's this: the Vikings were truly awful human beings.

The Vikings are the ostensible protagonists of this series, but it's hard to cheer for people who steal, capture slaves, murder civilians and practice human sacrifice. In the second episode, they attack a monastery, in the hope of stealing treasure. They arrive to find that the monks have surrendered and the treasure is lying around in the open. At this point, they could easily take their spoils and go home — but they kill the monks too, for no apparent reason other than the sheer pleasure of exterminating human lives.

In theory, the series takes a neutral position on all of this. It says: this is the way that Vikings used to live. You might not like it, but we're not here to judge or take sides.

So, yes, Vikings wins points for historical accuracy. (I note with approval that there are no horned helmets in sight.) But, although "neutrality" is a fine editorial position if you're writing a history paper, it has some pitfalls if you're producing a TV series. Television audiences, after all, like having someone to root for. Even Game of Thrones, with all its complex shades of morality, has some straightforwardly sympathetic characters — even if the series does have a habit of killing them.

There are no sympathetic characters in Vikings. The main protagonist is Ragnar Lothbrok (Travis Fimmel), who is described in the show's promotional material as "the greatest hero of his age". Perhaps he was, but the character as depicted in this series is so insufferably smug that it's easy to see why his enemies hate him.

His main rival is the local earl, played by Gabriel Byrne. Lothbrok wants to sail west to attack England; the earl disagrees. A power struggle ensues between the two men, which takes up much of the first season. In some respects, Byrne's character is the more compelling of the two: whereas Lothbrok is flush with the confidence of youth, the earl has the air of an old man who knows he's on the losing side of history, but is trapped by circumstance and unable to change course.

Certainly, Vikings is not without its merits. There are many historical dramas that are content to treat the past as being essentially the same as the present, only with more exciting clothing and looser sexual morals. By contrast, Vikings does a commendable job of capturing the essential strangeness of its epoch. This isn't just a matter of how the characters behave but how they think: their motivations are simply not intelligible if you approach them with modern sensibilities in mind.

At its best, Vikings feels like a window into an alien land. It's an unpleasant world but it can be interesting to visit, at least for short periods of time. I'm just glad that I don't live there.

Can you spell ‘man bun’ in Futhark?