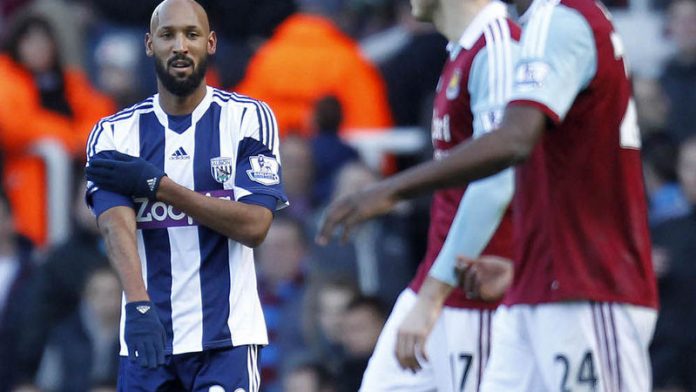 If the three men appointed to judge the matter of West Bromwich Albion footballer Nicolas Anelka (35) and the quenelle – a salute with one arm straightened and pointed downwards, the other held across the chest – had been given unlimited resources, they could have started their investigation with a visit to the Square Van Gogh.

This little recreation of an idealised rural France was built in the 1970s in La Plaine de Neauphle, a sector of Trappes, a banlieue, or suburb, south of Paris. It was there, in the Rue du Moulin de la Galette, named after one of Van Gogh's bucolic paintings, that Anelka grew up, amid a landscape full of cognitive dissonance.

Someone had a vision for La Plaine de Neauphle, which contains colour-coded apartment blocks named after France's great cultural figures: Stendhal, Gauguin, Cocteau, Daumier, Camus. But, as the town planners would have known, the inhabitants are almost all from France's former colonies: Algeria, Morocco, Tunisia, the Antilles, Vietnam.

When I visited there in 1999, looking for something that might explain the puzzling behaviour of a 19-year-old prodigy who was scoring for Arsenal, but didn't celebrate his goals, it was already numbered among France's quartiers difficiles, where youths relieved the boredom by making trouble.

"A ghetto, a lot of kids, a lot of unemployment, a certain amount of drugs, a lot of angry people, a lot of small crime," Claude Rondeau, the head of the local gendarmerie, told me then as he sat in his office beneath posters of Zinedine Zidane and Youri Djorkaeff, stars of the team that had won the football World Cup the previous year. "The kids get together at night. Sometimes they set fire to a car."

Rondeau said that Anelka's parents – a school secretary and a post-office worker, both with origins in Martinique – were good people. "But in these suburbs the boys spend their time in groups, and they feel very rejected by society. They hate police, they hate authority, they attack buses because the drivers wear a uniform. Nicolas was not on the worst side, not a bad boy. But the education in these suburbs had an impact."

Holocaust lessons
He was not talking about the kind of formal education that includes lessons in the history of the Holocaust, part of the standard curriculum of France's schools. Those particular lessons were brought up by the lawyer for the Football Association (FA) to reinforce the claim that Anelka's use of the quenelle when celebrating his first league goal for Albion in December must have included an element of anti-Semitism. But if Anelka attended those classes, his school record suggests that he wasn't paying much attention.

Although he spent some of his adolescence in the well-appointed surroundings of Clairefontaine, the French football federation's residential academy, in spirit he never really left Trappes. During his years in London, when he was already earning big money, he returned there at every opportunity.

"My friends are here, like before," he said. "Some people may say I've changed, but I know it's not true. I never forget anything, above all my roots."

His real education, then, came from his cultural environment. This is a world described in The French Intifada, a book published last week in which Andrew Hussey, the dean of the University of London Institute in Paris, examines France's colonial history in an attempt to explain the unrest among the young people of the banlieues. As the regulatory commissioners from the Football Association struggled to decide whether Anelka's "salute" to his pal Dieudonné M'Bala M'Bala contained an anti-Semitic element, they might have done well to read it.

During several weeks spent in a Trappes-like suburb called Bagneux, Hussey noticed a disturbing phenomenon: "The more time I spent there, the more I began to pick up on casual references to synagogues, Israelis and Jews, like a secret code being revealed. These references would be refracted through the slang of the banlieues. So phrases such as sale juif, sale yid, sale feuj, youpin, youtre, all racist epithets, were widely used. I heard all about the crimes of the Jews, yet it was hard to find anyone who had met a Jewish person. 'We don't need to meet Jews,' I was told by Grégory, a would-be rapper and Muslim. 'We know what they're like.' But that was the problem: nobody did actually know what 'they' were like. It seemed to me that hating Jews – like supporting Arsenal or listening to the rap band NTM – had become a defining motif of identity in the banlieues."

Historical roots
Hussey shows how for the children of North African immigrants, this anti-Semitism – with its occasional murderous outbursts – has historical roots going much deeper than the Nazi persecution or the Palestinian intifada. Those origins are half-buried in a past with whose specifics few of us are familiar but that provided the fuel for Tribu Ka, an organisation resembling Elijah Mohammad's Nation of Islam, now banned in France, and Kémi Séba, its eloquent and charismatic spokesperson, a kind of French Louis Farrakhan. As it happens, Kémi Séba (32) – whose parents are from Benin – is of Anelka's generation: a few years younger than the footballer.

Anelka may behave like an idiot sometimes but he is not stupid, and it might still be argued that, when he claimed to be ignorant of any possible connection between Dieudonné's quenelle and anti-Semitism, he was being disingenuous. With a bit more digging, the regulatory commissioners might have uncovered further layers of truth, and applied an appropriate punishment.

But what, really, is to be done about the mind-set of a generation of young men who find it easier to identify with al-Qaeda and the Taliban than with their own government? Alienated by official indifference to their existence, and sometimes much worse, they seek their own belief systems, principally in the embrace of Islam, to which Anelka converted 10 years ago. And so they choose a side in a battle that has raged, in various forms, for many centuries, and that once again has the power to reshape the world.

Last year in Trappes, Claude Rondeau's police station was attacked by Muslims angry that a veiled woman had been subjected to an identity check. All the millions of pounds earned by Anelka in nearly two decades as a footballer have not been enough to sever him from those roots or those resentments. The Football Association is currently deciding whether to appeal against a verdict that found him guilty of an anti-Semitic act, yet not guilty of anti-Semitism. But the FA, and he, is swimming in deep, deep waters, amid the tides of history. – © Guardian News & Media 2014