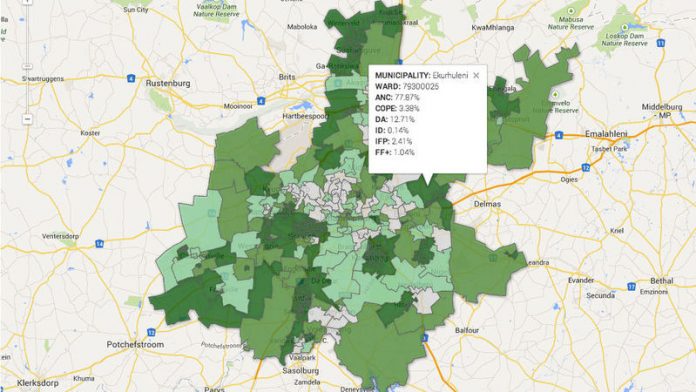 In the last election, 65% of the voters in Gauteng put their X in the ANC's box. But if you drill down to the ward level, you can see that the province is a political patchwork. Of the 449 wards mapped, 347 (77%) were won by the ANC and 102 (23%) were won by the Democratic Alliance (DA). Twenty-nine wards were close calls (won by a margin of 10 percentage points or less); 13 of those wards were DA wards and 16 were ANC wards.

Click on the map below to see who voted for which party in Gauteng's wards in the 2009 national elections.

In 1994, after standing in queues for hours to make their mark in the country's first democratic elections, 60% of the people of the PWV (Pretoria, Witwatersrand, Vereeniging), which became Gauteng at the end of 1994, voted for the ANC. The former ruling party, the National Party (NP), got 28% of the votes. Other parties that won seats in the National Assembly were the Inkatha Freedom Party (IFP), the Freedom Front (VV-FF), the Democratic Party (DP), the Pan Africanist Congress of Azania (PAC) and the African Christian Democratic Party (ACDP).