Media should swot up before offering opinion on Oscar trial 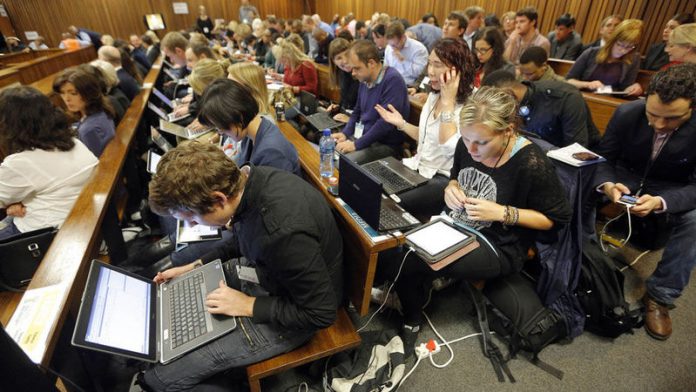 When permission was granted by Judge President Dunstan Mlambo to allow the proceedings of the Oscar Pistorius trial to be filmed, our criminal justice system embarked on an uncharted journey. For the first time in this country's legal history, the criminal justice system would be subjected to microscopic examination, not only in this country but also worldwide. The Bench, the Bar, the prosecution and the police are under unprecedented scrutiny.

Predictably, the police service has appeared to falter at the first hurdle, if the poor performance of police witnesses under cross-examination is any guide. On Twitter and the internet generally, the question has been posed: If the forensic investigation in so high-profile a case can be subjected to so much criticism in court, then what kind of investigation takes place in trials that obtain no media coverage? Many observers have noted that when a high-profile white accused is on trial the media provide saturation coverage, but in the vast majority of cases victims are ignored and the trial receives a mere cursory report.

It is understandable that when an accused enjoys a worldwide profile, as Pistorius does, members of the media will descend on the courtroom in enormous numbers and with seemingly unlimited resources. The same would, in all likelihood, apply if the accused had been a high-profile black sportsman who was charged with the murder of his girlfriend. Yet given the scale of human tragedy that confronts our courts on a daily basis, the Pistorius frenzy is at the very least uncomfortable when compared with the lack of care that prevails when black victims are involved.

For this reason, a significant positive that may emerge from this coverage is to place the quality of police work under the spotlight, which, in turn, may help to improve matters for the majority of cases that flow through the courts.

It may be too early to assess the performance of the Bar and the prosecution: Judge Thokozile Masipa has presided with dignity, but her work comes much later with the production of the judgment. It is not too early, however, to examine the performance of the media. The international media, particularly in the United States, have employed commentators such the ubiquitous Allan Dershowitz, a retired Harvard law professor and celebrity lawyer, as well as Robert Shapiro, who was in the initial OJ Simpson defence team. It is a breathtaking illustration of American arrogance that it can be presumed that people who have never spent a day in a South African court and who operate under a jury system can presume to pontificate about the nuances of our criminal justice system.

Unfortunately, our media have not done much better. This is not surprising: of all the books written recently on high-profile trials, the only one that stands out as a clear and informed exposition of what transpired in the courtroom is Antony Altbeker's book on the Fred van der Vyver trial. As was the case with the coverage of previous prominent cases, most of those reporting on the trial have no legal training or knowledge.

Sadly, this presents no obstacle to them, as they opine on the way evidence should be weighed and judged. Simply because Barry Roux SC extracts a contradiction from one of Pistorius's former friends or a police officer, it does not, on its own, have much legal significance. Unlike under a jury system, a court of a judge and two trained assessors must provide a reasoned judgment as to whether the accused is guilty or is acquitted. That means a consideration of the evidence, read as a whole, in which certain testimony will play a far more important role in the eventual result.

In this case, had most of the media had the benefit of the kind of legal insight to which the public is surely entitled, there would have been far more credible reports on where the defence may have made inroads into the state's case and where the cross-examination may not have achieved any benefit for the accused. In similar fashion, a careful examination of the bail proceedings, Pistorius's version of events at his bail application – which obviously must remain central to his version of what happened – and a careful understanding of the criminal law relating to self-defence (CR Snyman's Criminal Law, which is very lucidly written, could be a useful point of analytical entry) are surely essential reading before reporting on such a trial.

Overall, the media, a few exceptions to the contrary, have done a poor job of guiding the public through the intricacies of this trial. That is regrettable, because here was an opportunity to educate the public about our legal system. Mercifully, because our system is judge-based as opposed to jury-based, the overwhelming nonsense spoken in the media will have no effect on the process of adjudication in this case.