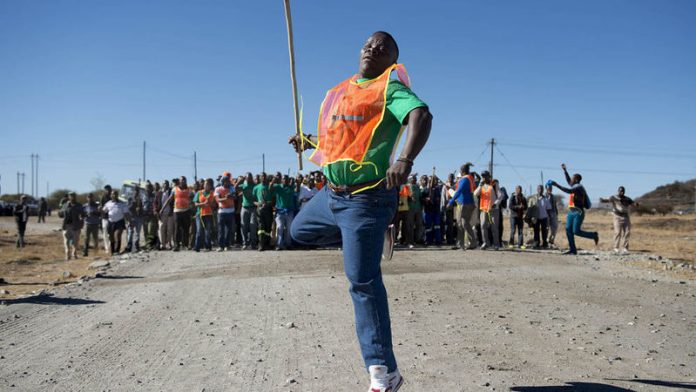 As South Africa's biggest post-apartheid mine strike marks its eighth week on Thursday, it is already denting growth and export earnings, and many of those affected are having to sell their most prized possessions to make ends meet.

In an informal bar near the platinum belt city of Rustenburg, striking miner Oupa Majodina holds up his cellphone to show a photo of his pride and joy: his cattle.

No talks are scheduled between the two sides to the strike, the Association of Mineworkers and Construction Union (Amcu) and the world's top platinum producers, Anglo American Platinum, Impala Platinum and Lonmin, and they remain poles apart on the issue of wages.

This means the misery will only spread, creating an even bigger headache for President Jacob Zuma and the ruling ANC in the run-up to the May 7 general elections.

Global production slump
The strike has hit about 40% of global production of the precious metal, which is used for catalytic converters in vehicles and is a key source of hard currency for South Africa.

The companies have lost revenues of R9.2-billion and counting, according to an industry website that updates the losses like a doomsday clock.

"You will need to take that R9-billion out of the current account because it is almost all from exports," said Mike Schussler, who runs economics consultancy economists.co.za.

This current account deficit is already a key weakness in South Africa's economy, putting its rand currency under pressure. It grew in 2013 to 5.8% of gross domestic product (GDP), its widest since 2008.

A wave of violent, wildcat strikes that erupted periodically in 2012, rooted in a turf war between Amcu and the National Union of Mineworkers (NUM), cost platinum and gold producers more than R16-billion that year, when the current account gap was 5.2% of GDP.

With no resolution in sight, the cost of the present strike may exceed that, and the losses will continue to mount after it is over, as operations will take a long time to get back to full production. Job losses and shaft closures look highly likely.

Untimely spending binge
For the current account, the losses will be magnified as South Africa's government embarks on a spending binge for big ticket items, such as more than 1 000 trains that will be imported from foreign companies such as US firm General Electric.

"There will be huge pressure on the current account from the government's infrastructure programme. So this strike could hardly come at a worse time," said Schussler.

The impact on growth will be significant. Africa's largest economy is seen expanding at a sluggish pace of only around 2.5% a year, according to the latest Reuters poll of economists.

"Roughly speaking, if you look at our GDP, which is R3.6-trillion, then that R9-billion is about a quarter of a percent off economic growth already," said Schussler.

Perhaps half a percent had been lost already, he added, if the R4-billion in lost employee wages and the effect on companies that supply and service the mines are added.

"This means growth of 2% or lower," said Schussler.

Impact on price
Even operations not on strike, such as Aquarius Platinum's, have not been able to capitalise on their rivals' misfortunes as the strike has not had much impact on price.

Spot platinum prices are little changed since the strikes began on January 23 as traders bet that the availability of above-ground stocks would cushion consumers from the impact.

The lost wages have been felt immediately in the communities along the platinum belt northwest of Johannesburg.

Patrick Tlou (48), the owner of the Phomolong Tavern, where Majodina and a few other men were sitting in a circle on plastic chairs drinking beer, said his trade has been suffering.

"Business is very down. It's because of the strike. Many of my customers have gone home," he said.

Long way home
Home for most miners is the villages they hail from in places such as the Eastern Cape, hundreds of miles away.

This is where Majodina keeps his cattle. After sending money home for years to his family, he will now have to draw on his cows and kin to see him through the strike.

"On April 1, I will go to the local Shoprite store and get R300 that my mother will send me out of her pension cheque. But normally I send money home," he said.

As for his cattle, it's a buyer's market as desperation sets in among miners, many of whom own livestock in their rural homesteads.

Caravan returns
Elsewhere in Rustenburg, Ig Bronkhorst, owner of Campworld, which sells caravans and camping gear, said his business has been affected badly, although his typical client would be in a higher income bracket than the striking Amcu members, who are at the bottom of the mine wage scale.

"My business is down at least 30% since the strike started. It goes wider than the guys working on the mine. It is also the contractors and the suppliers for the mines, and many of them are my customers," he said.

"People are bringing back caravans to sell because they need money," he said. – Reuters, additional reporting by Jan Harvey