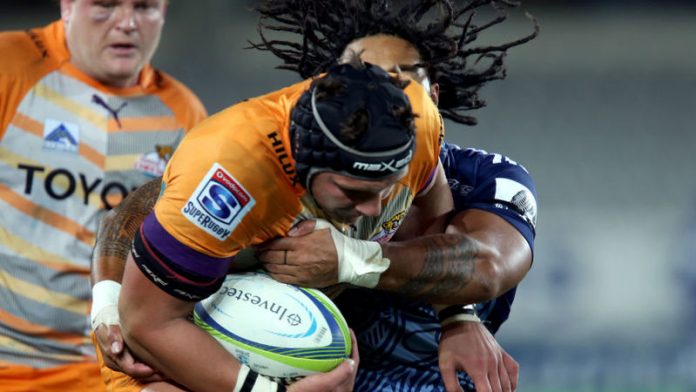 The win, in their first home game after a fruitless trip to South Africa, gave the Blues two wins from five matches and lifted them to sixth on the ladder although with four matches still to be played in the round.

The Blues and the bottom-placed Cheetahs have the worst defensive records in the competition and the 70 points scored was testament to the high error count by both sides.

Even when the Blues needed to shore up their defences as the Cheetahs fought back from a 30-13 deficit it was more the Cheetahs' errors than tackling by the Blues that kept the Auckland franchise ahead.

In the end the difference was one converted try and the Cheetahs, who have not tasted success since a second round win over the Northern Bulls, had reason to feel aggrieved about the legality of a try by Blues centre George Moala.

Sin bin
Argentine referee Francisco Pastrana sought the opinion of the television match official and then awarded the try apparently against the advice he received.

The golden period for the Blues came during 10 minutes in the first half when they piled on 17 points while rugged Cheetahs loose forward Boom Prinsloo was in the sin bin.

Prinsloo was punished as the first offender after Pastrana had warned he would take a tough line on defensive fouls after the Blues had repeatedly infringed on their own line.

Pastrana had a busy night with the whistle, and early errors from both sides resulted in Johan Goosen and Simon Hickey trading penalties to have the scores level at 6-6 before the Blues breached the Cheetahs defence for the first time.

Steven Luatua crossed after a series of forward drives only for Prinsloo to immediately score at the other end with Hickey and Goosen adding the extras to tie the score up at 13-13 after 20 minutes.

Unopposed
When Prinsloo was yellow-carded, Hickey landed his third penalty and converted tries by Moala and Tevita Li as the Blues pulled away to a 30-13 lead before an Elgar Watts penalty reduced the margin to 30-16 on half-time.

Moala's try was fortunate when replays indicated a double movement, but there was no doubt about Li's try after Willie le Roux failed to gather a chip kick allowing the Blues to regain possession and score unopposed.

The Cheetahs scored two long-range tries as they enjoyed the better of the second half, the first a 45-metre run by Cornal Hendricks and the second a 65-metre team effort finished by Hennie Daniller, both converted by Watts.

However, the Blues were able to stay in front with a try to prop Tony Woodcock and a further penalty and conversion to Hickey. – Sapa-AFP

Lions back in Super Rugby