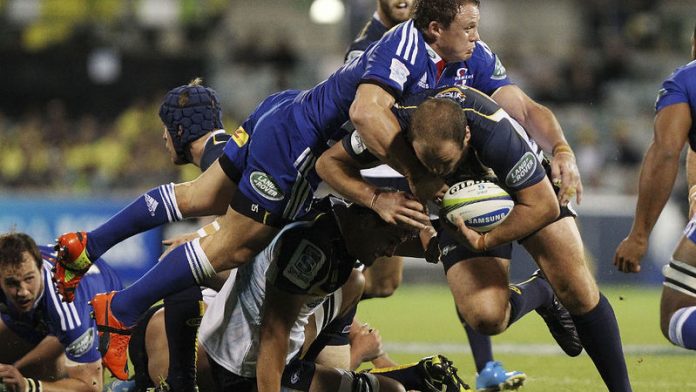 Coleman scored two of the Brumbies three tries but it was his second touchdown in the 62nd minute that gave the home side the edge in a tight match against the South Africans.

With the Brumbies clinging to a 13-10 lead, Coleman chased down a kick ahead by captain and number eight Ben Mowen.

Stormers winger Jacobus van Wyk appeared to have the kick covered and waited for it to trickle into touch but Coleman kept running and somehow twisted his body and grounded the ball just inside the corner post for a crucial try.

The Brumbies hung on despite Stormers' substitute back Juan De Jongh crashing over for a 75th minute try to cut the deficit to three points.

Penalty try
In a frantic last three minutes, Coleman was denied a hat-trick when the ball rolled out of play as he led the chase and then centre Pat McCabe was held up.

A penalty try from a scrum on the bell sealed the points for the Brumbies.

The Stormers were quicker to settle and Grant posted first points from a seventh-minute penalty after missing his first attempt three minutes earlier.

The Brumbies hit back in the ninth minute when fly-half Matt Toomua sliced through and set up Coleman for his opening try.

White's conversion put the Brumbies up 7-3 but the home team struggled to put together multi-phase moves, missed more tackles and gave away several breakdown penalties.

From one of the penalties, powerful Springboks number eight Duane Vermeulen powered his way over from close range after a drive from the Stormers pack following a lineout.

Grant's conversion gave the Stormers a 10-7 advantage before the Brumbies responded with two of their own to lead 13-10 at the break.

'Zeroed in'
The win took the Brumbies above the NSW Waratahs at the top of the Australian conference while the Cape Town-based Stormers are only above the Central Cheetahs in the South African conference after their third defeat on their Australasian tour.

"It's really tough to play the Stormers and it's a really nice result on the back of some good form over the last couple of weeks," Brumbies skipper Ben Mowen said.

"We knew they were going to play for their season after eyeing off at least two victories on their tour and they zeroed in on us."

Stormers captain Jean de Villiers said his team paid for a lack of composure near the end of the match.

"Not just the kickers but I thought the whole team made too many mistakes towards the end and I thought we lost our composure," de Villiers said.

"It doesn't get any easier and we play the Queensland Reds next week and we need to change a bit and learn from our mistakes." – Sapa-AFP

Lions back in Super Rugby